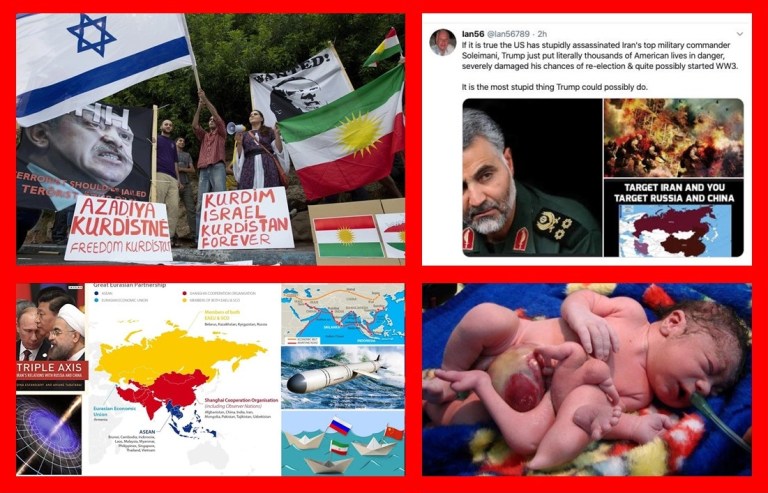 It has been my duty – and my honor – to work with such stellar strategic intellects as Col Doug Macgregor, himself a candidate for both Secretary of Defense and National Security Advisor positions during the first Trump Administration, and to be a loyal supporter and admirer of General Michael Flynn, Trump’s first National Security Advisor who was framed by the FBI and the Zionists to remove him from the White House. My observations below are informed by my past as a CIA spy and creator of the Marine Corps Intelligence Activity (MCIA), and by my non-fiction reading including hundreds of books on the corrupt, dysfunctional, and even treasonous US national security personalities and institutions.

Here are my conclusions:

01 Israel has been trying desperately to force a war with Iran, partly to save war-criminal Benjamin Netanyahu and partly to continue its long standing strategy of destabilization to divide and conquer the Middle East.

02 The primary war-mongering within Iraq is being done by Israel and the Kurds, with the US forces more like a supporting clown show.

03 The “campers” at the US Embassy, thankfully dispersed now, were intended to deceive President Trump into thinking that an Embassy take-over was imminent, similar to that which occurred in Iran under President Carter. Several of us helped end that theatrical show.

04 If Trump did approve this assassination, he was deceived into thinking it was the equivalent of a Bin Laden assassination (never mind that Bin Laden – and ISIS – were both created by the Zionists and the CIA with Pentagon funding and equipment) and he was not told that the assassination of Major General Qassem Soleimani within Iraqi territory is right up there with the assassination of Archduke Franz Ferdinand that was used as a casus belli for WWI.

05 Trump is surrounded by four pathological networks of liars: the US Army West Point Class of 1986 (Esper, Pompeo, Urban), Christian Zionists (Pompeo, others), Zionist agents (Kushners, both of them), and CIA Zionists (Brennan, Haspel, others). While his new National Security Advisor Robert O’Brien, is doing some spectacularly good work in eliminating Obama war-mongers and agents of foreign powers form the National Security Council, he may not have the nuanced grasp of history and current biographics needed to protect the President from these four networks of liars who favor war with Iran at any cost.

06 Both the US Mainstream Media (MSM) and social media (#GoogleGestapo) are committed to Zionist desires for war with Iran, and careful to cover up the true costs of our was in the Middle East including what are known as Fallujah Babies – the result of depleted uranium used in armor plating and armor-piercing projectiles.

07 A proportional response by Iran would not be a strike on US forces in the region, but rather the assassination, within the USA, of Mark Esper. I say this not to encourage such a reaction,, but to make clear to all those who read this article that this is what the USA has done to Iran, while also violating Iraqi sovereignty in a manner worthy of the International Criminal Court.

Below is my letter to President Trump submitted to the White House comment line this morning at 0542 Eastern Time.

You have been schlonged by DoD and CIA and the US Army Class of 1986. The assassination of Major General Qassem Soleimani within Iraqi territory is right up there with the assassination of Archduke Franz Ferdinand that was used as a casus belli for WWI.

If you actually gave this order, you need to consider the possibility that everyone that advised you to do so is an agent of influence for Zionist Israel, and fire them.

Right now you need to be thinking about damage control. You are NOT in control of the US Government (as JFK was told by Schlesinger when he was angry over the missiles not being pulled from Turkey as he had ordered). Rule 1 in Washington according to Mort Halperin in Bureaucratic Politics and Foreign Policy is “Lie to the President if you can get away with it.”

Mike Flynn has a better grip on this stuff than your current team. I earnestly urge you to determine if this was a CIA drone or a DoD drone, and then very publicly fire both the Secretary of Defense and the Director of the CIA, transfer the CIA drones to DoD and terminate their use as assassination devices (most of their [alleged] successes are lies, you are being lied to).

I pray this message reaches you but have no faith that it will. I am doing my duty. To stop war with Iran, you need to fire Esper and Haspel and put Pompeo on a path out the door. PNG’ing the Israeli Ambassador would not hurt at all.

The West Point 1986 class is schlonging you. At the same time I believe that Gina Haspel is covering up for John Brennan and not cooperating fully in providing the available records on Brennan’s “green phone” calls to and from the UK with MI-6 and GCHQ. Combine those with an NSA print-out of every unmasking as Bill Binney and I have recommended to the AG, and you have it all.

I am praying for you. Anyone who supported this insane strike and assassination is an enemy of the USA.

At this most delicate time in the history of the Middle East, I reiterate my view that the restoration of Palestine to the Palestinians is inevitable; the withdrawal of US forces and the closure of US bases in the Middle East (and hopefully around the world) is inevitable; and the degree to which our President is a prisoner in the White House, being lied to by four pathological networks, can and should be considered by the leaders of Iran, Iraq, China, and Russia.

In my view, the best appropriate response at this time is for Iraq to insist that all US forces – and all US “diplomats” as well as contractors (including particularly Exxon employees) leave Iraq. Iraq should also work with Iran and Russia to expel Israeli forces from the Kurdish zone in Iraq.

Escalation of this matter serves the Zionists – no one else. Given our President’s “capture” and our President’s vulnerability to liars – to enemies of America within the White House – to traitors – I humbly and respectfully recommend prudence on the part of Iran, and decisive action on the part of Iraq. Expel all foreigners. Work with Russia to hunt down and kill any Israeli forces that remain behind. Put the Israeli heads on stakes in the public square of Baghdad. This assassination may have been carried out by the USA, but only in our capacity as “useful idiots” in service to the Zionists.

Let this be my contribution to peace this day.

May God Bless each of us and may God have mercy on the souls of those who do great evil without understanding just how evil they have become.

Why the assassination of Qassem Suleimani is such a monumental gamble: Killing the Iranian spy chief in Baghdad is akin to Tehran killing the head of the CIA on foreign soil