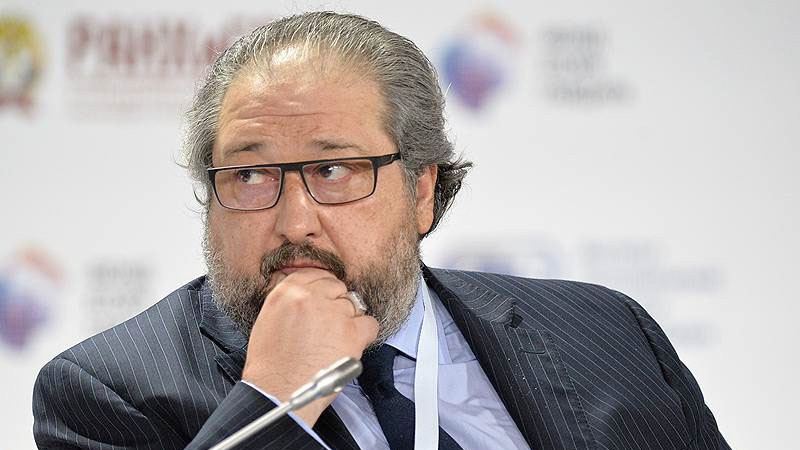 On January 30th Benjamin Netanyahu visit to Moscow to seek Russian approval of the Trump peace plan and to pick up the pardoned female IDF intel operative Naama Issachar who was arrested and jailed for 10 months officially for the drug trafficking and unofficially for testing the mode of operation at the Sheremetyevo International Airport border control.

On the same day Russia’s Investigative Committee, an equivalent of the FBI, asked the Basmanny district court in Moscow for the arrest of Boris Mints and his sons, Alexandr and Dmitri, in absentia. All three are accused of particularly large embezzlement (part 4 of article 160 of the criminal code). All three of them are on the Interpol International wanted list.

Boris Forbes was one of the army of the “managers” all with general Talmudic cult background, who were placed to manage looting and financial raping of Russia in the 90s. With the modest degree of the Bachelor of Arts from a small provincial university, Boris Mints was stratosphered to become a head of the Committee for Managing State Property and Administration for another Western manager to loot and dismantle Russia, Boris Yeltsin.

An euphemism for the members of the Talmudic cult is “Multinationals,” see the research by Csaba Weiner, a Hungarian Academy of Sciences, Centre for Economic and Regional Studies, Department Member, who specializes in tracking Russian money in Europe. One of his paper titled Pull factors driving Russian multinationals into five CEE countries A sectoral overview“.

In this research Csaba Weiner has projected the activities of the narrow group of people affiliated with the Talmudic cult, including Boris Mints, on the Russian state and Russian nations. C. Weiner writes as a fact that “ most of the current attention on Russian influence in Europe has been focused on direct interference in political affairs.”

However, the claim of ‘Russian interference’ is increasingly being revealed as a false flag attack. “John Bolton once suggested on Fox News that the Russian hack of the DNC [Democratic National Committee] was a false flag operation that had been conducted by the Obama administration.”

Another C. Weiner’s claim is about a nefarious, anti-democratic nature of “the international expansion of Russian multinationals in five EU-member Central and East European (CEE) states, i.e., the Czech Republic, Hungary, Poland, Slovakia and Slovenia.” He, as many of his colleagues, ideologically packages the capital theft from Russia and the support of the failing European economy with the stolen capital as some nefarious Kremlin’s plan.

What disproves this notion is the flow back to the state of the assets recovered as a result of Putin’s Purge. The SK investigations, and the Russian government efforts to arrest those ‘multinationals’ like Boris Mints and his sons and to recover stolen capitals, the entire premise of Csaba Weiner’s thesis about the evil Kremlin’s investments into the EU members is again a propaganda of the theft from Russia as the “economic invasion” by Russia. Granted that Russia didn’t lifted its counter-sanctions against the EU members and those countries that placed their sanctions on Russia for the democratic choice of the people of autonomous republic of Crimea to leave Ukraine after the 2014 Nazi putsch and to join Russia.

The SK is driven by the mission of the capital recovery for its reinvestment into Russia’s economy.

But, here must be another reason to stop investing Russian money into Europe. This reason is the United States preparation for the war against Russia on the territory of Europe. It’s senseless to invest money into the territories that are being prepped to be a battlefield for the war against Russia in which this territories will be completely wiped out. Many military analysts state that this war is impossible, but you can read the Pentagon’s plans for the collapse of Europe before 2028, and there is nothing on the ground indicating that the Pentagon is backing out of its plans.

That’s why Putin’s Purge of those who participated in the rape of Russia, like Boris Mints, is going with the ever accelerating speed. The recovered funds are immediately go back to the treasury and reinvested into Russian economy, social programs, and into the defense.

According to the Forbes, Boris Mints is the owner of Cyprus-based investment holding company O1 Group, which owns pension funds and real estate assets in Russia. In 2014 he sold a 12% stake in O1 Group subsidiary O1 Properties to Goldman Sachs International. He used the proceeds to buy several Russian pension funds and a stake in Austrian CA Immobilien Anlagen, which invests in real estate; he has since sold that stake. “

The Forbes claims that “Mints holds a degree in physics.” He actually has a Bachelor of Arts degree.

In the 1990s he worked at the Committee for Managing State Property and Administration of the President of Russia.

Both Mints’ parents came from the Russian Empire Pale of Settlement in Moldova and Ukraine.

He is a Vice-president of the World Jewish Congress.

He is a Founder and chairman of the Yegor Gaidar international foundation. Yegor Gaidar was a theoretic and a supervisor of the internationally organized and implemented economic and political collapse in Russia known as the Liberal Terror that caused at least 10 million extra deaths in 10 years.

Chairman of the board of trustees of the Conference of European Rabbis.

Mints is one of many “Russian oligarchs” named in the Countering America’s Adversaries Through Sanctions Act, CAATSA, signed into law by President Donald Trump in 2017.

Boris Mints is considered to be a close ally of notorious Anatoly Chubais.

In March 2017, Forbes estimated Boris Mints’ wealth at over £1 billion.

Now, Russia is trying trying to recover funds stolen from the nation by the members of the Talmudic cult.

In 2017, Otkritie FC Bank collapsed as did two others in a group known as the Moscow banking circle. They required a bail-out by private banks and the Central Bank of Russia. The Otkritie bailout required over $8 billion. In July 2019, the central bank sued Otkritie’s former owners and senior executives. Although Mints had sold his shares in the bank in 2013, he allegedly still had a relationship with Otkritie. The central bank alleged that Mints’ company, O1, sold bonds to the banks as a “fraudulent scheme” to pay off its debt just days before the collapse, according to a Financial Times report.[19] An earlier report in February 2019 had stated that the banks were alleged to have sustained “losses from purchasing large amounts of O1 and Otkritie Holding assets”.

In June 2018, Russia petitioned the High court in the UK to freeze £470 million of Mints’ assets, including a mansion in Perthshire, Scotland, known as the Tower of Lethendy. The court agreed only to an injunction prohibiting Minsk and his three sons from disposing of assets, including the mansion. (The Mints had moved to London, UK in spring 2018.)

The Tower of Lethendy is only one of 140 of Mints’ properties that the banks were attempting to confiscate. Ownership documents indicate that the mansion is owned by MFT Braveheart Ltd, a company registered in the Cayman Islands. According to the FT report, “Mr Mints and his sons deny committing fraud and are contesting the allegations in arbitration proceedings scheduled to be heard next April in London”.