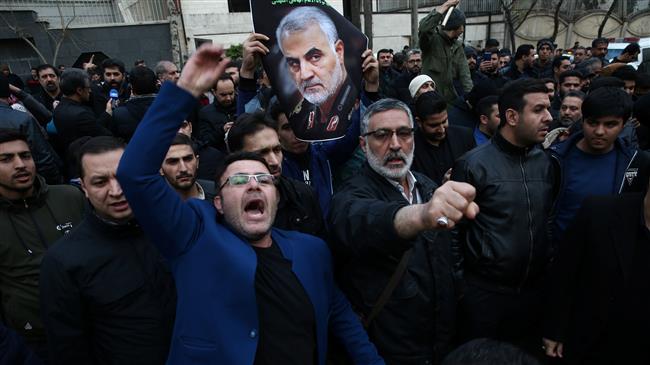 “This action can seriously aggravate the situation in the region,” the Kremlin quoted President Putin as saying during a telephone conversation with Macron on Friday.

A US drone carried out an airstrike at Baghdad’s international airport early on Friday, assassinating Lieutenant General Soleimani, who was the commander of the Quds Force of Iran’s Islamic Revolution Guards Corps (IRGC), and Abu Mahdi al-Muhandis, the second-in-command of Iraq’s Popular Mobilization Units (PMU), as well as eight other people.

Iran has pledged a “harsh revenge” on America for the assassination.

Macron said in a statement that he had held talks with Putin to discuss the situation in Iraq.

He also said in the statement that Iran should refrain from what he called any provocation.

“The Secretary-General has consistently advocated for de-escalation in the [Persian] Gulf. He is deeply concerned with the recent escalation,” Guterres’ spokesman, Farhan Haq, said in a statement.

“This is a moment in which leaders must exercise maximum restraint. The world cannot afford another war in the [Persian] Gulf,” he added.

Meanwhile, Saudi Arabia, which has previously cooperated with the US and the Israeli regime to assassinate Lieutenant General Soleimani, also called for self-restraint to prevent an escalation after the US assassination of the senior Iranian commander.

Saudi Arabia’s Ministry of Foreign Affairs said in a statement that the international community must fulfill its responsibilities to ensure the region’s security.