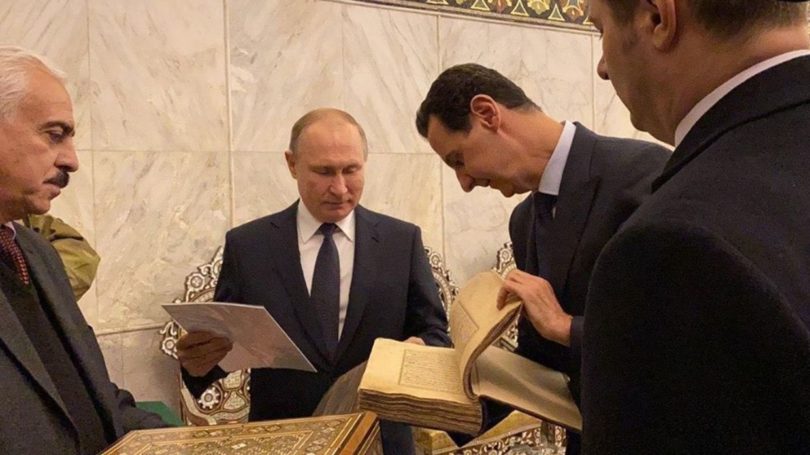 Russian President Vladimir Putin spent his Christmas day in Damascus, a city that is closely tied to early Christianity, home to Syria’s oldest Orthodox Church and a mosque that keeps the relics of John the Baptist.

Putin’s plane touched down in Syria on Tuesday, to everyone’s surprise, as the president was last spotted in St. Petersburg the evening before, attending the Orthodox Christmas Eve service.

His unannounced trip included not only talks about fighting terrorism with Syrian President Bashar Assad, but also visits to the city’s historic religious sites. After the talks, Putin and Assad took a walk through the center of Damascus, stopping at the Umayyad Mosque, also known as the Great Mosque.

One of the largest and oldest mosques in the world hosts the head of John the Baptist, who is also venerated in Islam as Prophet Yahya. The relic was shown to the Russian leader, responded in the manner of a good guest, presenting the mosque with a 17th-century copy of the Koran.

The two leaders than headed to the oldest Orthodox church in Syria, the Mariamite Cathedral, built during the second century. It’s the seat of John X, the Patriarch of Antioch and All the East, who greeted the high-ranked guests.

The Patriarch thanked Putin for sending the Russian military to assist Syria in the fight against the terrorists. Without this help, the church could’ve now been the headquarters of Islamic State (IS, formerly ISIS) leader Abu Bakr al-Baghdadi or some militant warlord, he said.

John X also described Syria as a tolerant place “where different religions – both Christians and Muslims – coexist peacefully and enjoy the same rights.” The Russian president had a gift for him as well, an icon of the Virgin Mary painted in Russia.

After a brief buy busy stay in Damascus, Putin flew to neighboring Turkey, where he is scheduled to hold security and trade talks with President Recep Tayyip Erdogan and attend the ceremonial opening of the ‘Turk Stream’ gas pipeline.