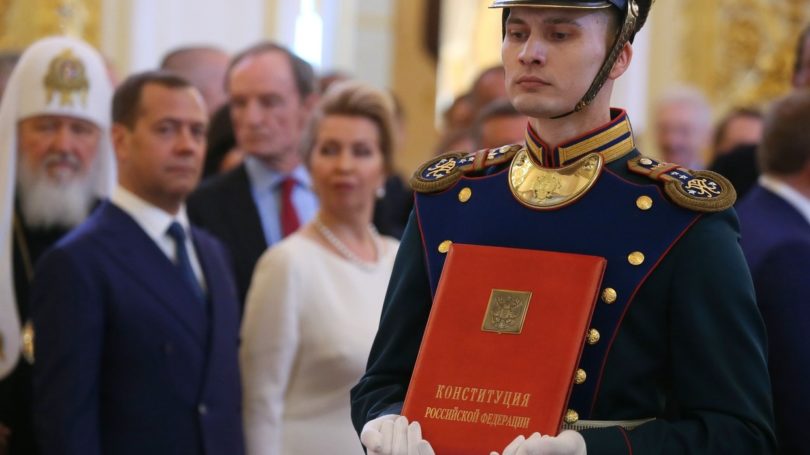 Besides discussing internal demographic, economic and weapons issues, the president said the five permanent members of the UN Security Council – the US, China, Russia, Britain and France – carry a “special responsibility for securing the sustainable development of humanity.”

Putin made the comments during his annual state-of-the-nation address on Wednesday.

The president said the five permanent members of the UN Security Council – the US, China, Russia, Britain and France – carry a “special responsibility for securing the sustainable development of humanity.”

These five nations must begin to devise measures aimed at neutralizing any conditions for a global war, and develop new approaches towards securing the stability of the planet.

He previously expressed “deep concern” over the recent flare-up of tensions between the US and Iran, which almost put the two countries on a brink of war. Both states did not mince words after Washington ordered the drone strike which killed senior Iranian military commander Qassem Soleimani in Iraq. Moscow urged everyone to show restraint and seek diplomatic means to defuse the conflict.

Talking national security and latest add-ons to Russia’s military arsenal, Putin stated that Moscow is “not threatening anyone and does not seek to impose its will” on other countries.

At the same time, for the first time in history, Russia is “not catching up” to anyone in terms of its defense capabilities.

Instead, “it is the other countries” that are racing to develop advanced weapons that Russia already posseses.

Putin proposes major amendments to Russia’s constitution incl. about his own post, says people should vote on changes

The constitution should take priority over international law if the latter violates the rights of Russian citizens or violates Russia’s constitutional principles, President Vladimir Putin has proposed.

Amendments to the constitution could be put to a popular vote to ensure “the development of Russia as a welfare and rule-of-law state,” the Russian leader said in his annual state of the nation address.

Adopting a brand new constitution is not necessary because the current one will remain relevant for many years to come, Putin explained. But he did suggest some changes he’d like to see.

One of the key issues Putin outlined was that Russia should abide by international law only if it does not conflict with the constitution. Adopted back in 1993, it should serve as a primary source “in our legal environment,” he stated.

International agreements and treaties, as well as decisions by international bodies may apply in Russia “only to the extent that they do not entail restrictions on the rights and freedoms of people and citizens, and do not contradict our constitution.”

The president then suggested stricter profiling of the top political brass, starting with presidential candidates and going all the way down.

An amended constitution would include compulsory requirements for “persons holding positions crucial for ensuring the country’s security and sovereignty,” including the prime minister, cabinet members, governors, heads of federal agencies, MPs, and judges.

They should be barred from having foreign citizenship or residence permits for other nations, Putin proposed.

Anyone willing to run for president will be subject to “even more stringent requirements.” Aside from the absence of foreign citizenship “not only during elections, but also at any time earlier,” a candidate must have lived in Russia for at least 25 years as opposed to the current 10 years.

Putin, who got re-elected in 2018, also took aim at the duration of the presidential tenure.

“I know there’s a debate in our society regarding a constitutional provision that the same person shall not hold the position of the president of Russian Federation for more than two consecutive terms,” he acknowledged. “I don’t think this is a fundamental issue, but I agree with that.”

Meanwhile, Russia’s Central Election Commission signaled a popular vote could be held as early as 2020. “If everything is solved quickly, this may happen this year,” the body’s secretary Maya Grishina said, according to Sputnik.

Russian President Vladimir Putin proposed granting parliament more powers to nominate key government officials, adding that the president will not be able to reject their picks.

Under the current law, the president nominates the candidate for prime minister, who then must be approved by the lower house of parliament, the State Duma.

In his annual state-of-the-nation address on Wednesday, Putin proposed to change this by “allowing the State Duma not only to approve but to choose” the PM. Under his plan, the prime minister would then present parliament with the candidacies of the deputy prime ministers and government ministers, which the parliament would also confirm.

Putin stressed that the president will “not have the power” to reject any of the candidacies confirmed by the parliament.

The proposed changes “pave the way for reformatting the system of power ahead of the 2024 presidential election,” political scientist and head of the Carnegie Moscow Center think tank Dmitry Trenin told RT.

“It’s clear that the new president cannot inherit Putin’s authority and influence. His constitutional powers will also be [more] limited,” he said.

The prime minister will become more significant, less dependent from the head of the state. The role of the parliament will also increase as its majority will decide who should form the cabinet and who will be its part.

Putin also proposed to have the existing consultative body, the State Council, written into the constitution. The council today is mainly made up of regional governors and aids the president in implementing his decisions.

“The State Council is being seen as a guarantor that the new power structure will work accordingly, instead of falling victim to internal struggles and in-fighting,” Trenin said, explaining that the reformed body will “secure stability” in Moscow, as well as in the regions.

The political scientist believes that Putin himself is likely to lead the State Council after his presidential term expires in 2024. “This way he will continue being the most influential state official and its highest authority,” Trenin suggested.

The changes require amending the Constitution, which Putin proposed to do through a public vote.

Free access to key Russian websites will give people wider opportunities to communicate, learn new things, and be creative; this will give the country a competitive advantage, Vladimir Putin has said.

The president’s annual state of the nation address focused on improving demographics and finding ways of increasing the quality of life for the population.

The internet has a huge part to play in this, and because the web is now “a daily life necessity” for most Russians, Putin suggested the “Accessible Internet” project should be launched nationwide.

Russia is one of the few countries in the world to have its own social networks, messengers, email and search systems, he said.

“Everywhere across the country free access to the ‘socially significant’ Russian-made websites must be provided. In this case, the people wouldn’t have to pay for the telecom service itself; for the internet traffic,” Putin said.

This will give people new opportunities to participate in the life of the country.

Easier access to the internet will provide “a wide space for education and creative work, communication and realization social and cultural projects,” the president said, adding that this will make Russia and Russians more competitive in the international arena.

Russia’s top telecom provider, Rostelecom, backed Putin’s initiative, saying that “in every situation a person must have the right to use a social or state service online.”

The measure should initially cover the websites of state agencies, social services, and medical organizations, it added.