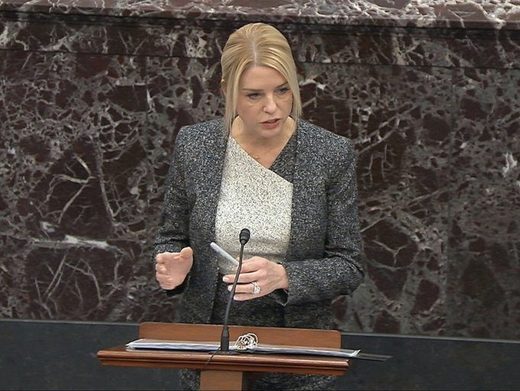 Using clips of testimony from Democrats’ own witnesses, and reports from the mainstream media — including an ABC News interview with Hunter Biden — Bondi argued that Hunter Biden was paid handsomely for little reason other than that he was the vice president’s son. The company was under investigation at the time — and Vice President Biden later famously insisted the prosecutor be fired.

She also noted that Hunter Biden was involved in business with Chris Heinz, the stepson of then-Secretary of State John Kerry. Both were involved in Ukraine — and elsewhere — at a time when ending corruption was said to be the top priority of the United States and other western governments in dealing with Ukraine.

Bondi also noted that journalists had asked the Obama administration about the Bidens’ conflict of interest, and that American diplomats — including State Department official George Kent and former Ambassador to Ukraine Marie Yovanovitch, who testified in the House impeachment inquiry — had raised concerns as well.

Nothing was done, she pointed out, and Hunter Biden only left the board of Burisma in April 2019, the same month that his father announced his campaign for the presidency, when under closer scrutiny than usual.

Bondi noted that the House Democrat impeachment managers had referred to “the Bidens and Burisma 400 times” in their presentation in an effort to pre-empt the argument that there was any legitimate basis, other than the president’s own political interest, for asking the Ukraine to investigate them.

“All we’re saying is that there was a basis to talk about this, to raise this issue, and that is enough,” Bondi explained.