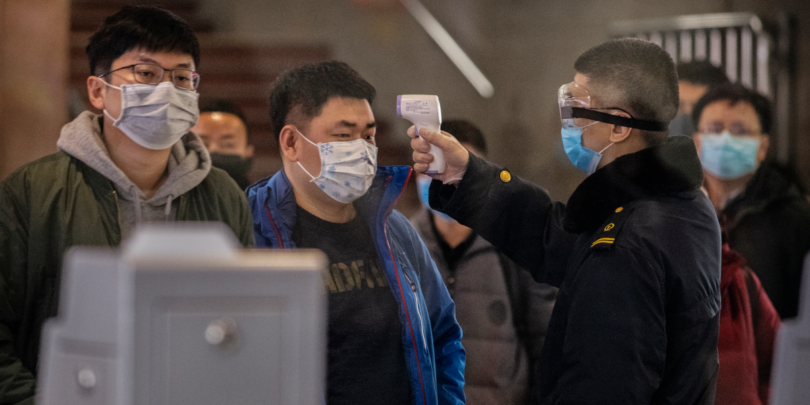 I hate to be the bearer of bad news, but…history matters.

When you see a new story on the horizon, and it looks a lot like an old story you know was a hoax, you have to dig up that history and report it.

Yes, many people hate history. It tends to stretch their attention spans, which are rooted in the present, where the action is: Twitter, Facebook, Instagram—little crumbs of NOW and NOW and NOW.

What was happening then? There was a grim pandemic spreading like an angry cloud over the world, threatening to kill millions of people. Sound familiar? Sound like China right now? It was called Swine Flu.

Just like now, the 2009 announcements were coming out of the World Health Organization and the CDC; the germ was a virus; it was spreading; travelers were carrying it; people were being tested at airports; the source of the germ seemed to be animal-to-human transmission; deaths were being reported; fear was rising. People were saying, THIS IS THE BIG ONE. Other people were saying: THIS IS A WEAPONIZED VIRUS ALTERED IN A BIOWAR LAB. Just like now.

So here is what I wrote about the 2009 Swine Flu pandemic in its aftermath—I hope you can shake off the idea that the following facts are IMPOSSIBLE, “THE AUTHORITIES WOULD NEVER HAVE DONE THAT,” IT COULDN’T HAVE HAPPENED. The following facts are possible and true, the authorities did do that, and it did happen:

In the late summer of 2009, the Swine Flu epidemic was hyped to the sky by the CDC [and the World Health Organization]. The CDC was calling for all Americans to take the Swine Flu vaccine.

The problem was, the CDC was concealing a scandal.

At the time, star CBS investigative reporter, Sharyl Attkisson, was working on a Swine Flu story. She discovered that the CDC had secretly stopped counting US cases of the illness—while, of course, continuing to warn Americans about its unchecked spread.

Understand that the CDC’s main job is counting cases and reporting the numbers.

What was the Agency up to?

Here is an excerpt from my 2014 interview with Sharyl Attkisson:

Rappoport: In 2009, you spearheaded coverage of the so-called Swine Flu pandemic. You discovered that, in the summer of 2009, the Centers for Disease Control, ignoring their federal mandate, [secretly] stopped counting Swine Flu cases in America. Yet they continued to stir up fear about the “pandemic,” without having any real measure of its impact. Wasn’t that another investigation of yours that was shut down? Wasn’t there more to find out?

Attkisson: The implications of the story were even worse than that. We discovered through our FOI efforts that before the CDC mysteriously stopped counting Swine Flu cases, they had learned that almost none of the cases they had counted as Swine Flu was, in fact, Swine Flu or any sort of flu at all! The interest in the story from one [CBS] executive was very enthusiastic. He said it was “the most original story” he’d seen on the whole Swine Flu epidemic. But others pushed to stop it [after it was published on the CBS News website] and, in the end, no [CBS television news] broadcast wanted to touch it. We aired numerous stories pumping up the idea of an epidemic, but not the one that would shed original, new light on all the hype. It [Attkisson’s article] was fair, accurate, legally approved and a heck of a story. With the CDC keeping the true Swine Flu stats secret, it meant that many in the public took and gave their children an experimental vaccine that may not have been necessary.

It was routine for doctors all over America to send blood samples from patients they’d diagnosed with Swine Flu, or the “most likely” Swine Flu patients, to labs for testing. And overwhelmingly, those samples were coming back with the result: not Swine Flu, not any kind of flu.

But it gets even worse.

Because about three weeks after Attkisson’s findings were published on the CBS News website, the CDC, obviously in a panic, decided to double down. If one lie is exposed, tell an even bigger one. A much bigger one.

Are your eyeballs popping? They should be.

In the summer of 2009, the CDC secretly stops counting Swine Flu cases in America, because the overwhelming percentage of lab tests from likely Swine Flu patients shows no sign of Swine Flu or any other kind of flu.

There is no Swine Flu epidemic.

Then, the CDC estimates there are 22 MILLION cases of Swine Flu in the US.

So…the premise that the CDC would never lie about important matters like, oh, a vaccine causing autism…you can lay that one to rest.

The CDC will lie about anything it wants to. It will boldly go where no person interested in real science will go.

—That’s what I wrote about the Swine Flu fraud years ago.

I reprint it here to give people some perspective on what health agencies like the CDC and the World Health Organization will do to pump up the idea (not the reality) of an epidemic.

Now, if you don’t mind, I’ll blow my own horn a little. After the mind-blowing revelations Sharyl Attkisson exposed in print, in 2009, about the Swine Flu hoax, how many other reporters understood the implications and followed up by writing their own stories and pressing home the astonishing hoax? How many interviewed Attkisson and hammered on her findings and spread the facts far and wide? How many went all-out to emphasize the outrageous guilt of the CDC on this scandal?

Most reporters, when an epidemic is announced, take the bait. Automatically. They fall for the con and the hustle like rookies going to Vegas for the first time, thinking they’re going to score at the betting tables. They make the crucial mistake of believing that some virus has really been discovered, and it is about to wreak havoc in the population.

A new virus story always sounds good. It will have legs. People will want to know about it. Some reporters—blithely accepting the existence and dire impact of a virus—will take that ball and run with it into new territory: “the virus was created in a lab.” They don’t stop and consider the possibility (confirmed by history) that the hoax goes all the way to the bottom—no virus was actually discovered, or if it was, there is a zero proof that it’s harmful. They miss that vital step.

There is more to discuss along this line—and I have, in print. It involves asking the questions, “How do researchers actually isolate a new virus and identify it?” and, “What are the correct standards for proving a particular germ causes a particular disease?” When you ask those questions and pursue the answers, you find yourself wading hip-deep in a swamp. The garbage floating around you is formidable. Everybody and his brother in the official medical community has answers, and most of them turn out to be self-serving propaganda, not science. It’s as if you’re hearing: THE WAY TO ISOLATE A VIRUS AND PROVE IT CAUSES A PARTICULAR DISEASE IS THE WAY WE SAID WE DID IT. NOW DON’T BOTHER US ANYMORE.

But it turns out that bothering is good. Necessary.