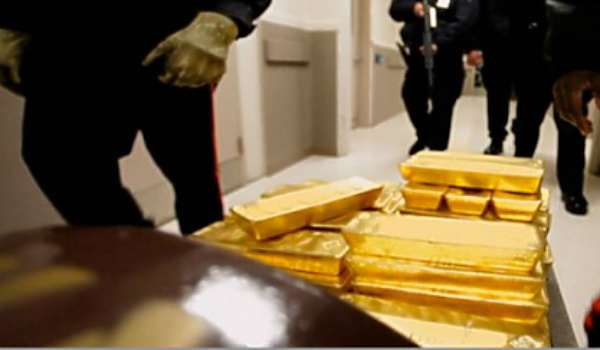 In typical fashion, yet another inexplicably bizarre story emerges of a deal clinched between the United States and its boogeyman “ISIS” (ISIL/Daesh) in which Washington, D.C. received massive amounts of stolen gold in exchange for providing safe passage to the group’s members in Syria.

The deal gave the United States “tens of tons of gold that the terror organization had stolen,” Sputnik reported Feb. 27, 2019, citing Syrian Arab News Agency (SANA). The loot was put at 50 tons. Some of it was Syrian gold, but much of it was Iraqi. In return, U.S. forces allegedly provided safe passage to terrorists and their ringleaders holed up in hideouts in the eastern province of Dayr al-Zawr.

This hearkens back to another gold-flight op that was said to have occurred in the Ukraine five years ago. Soon after the Crime Syndicate-backed coup d’etat occurred in Kiev, a convoy of four trucks and two cargo minibuses pulled into Kiev’s Boryspil Airport in the wee hours of the morning. A band of black ops loaded an aircraft with heavy boxes and the plane then flew off.

Rumors emerged that Ukraine’s official gold reserve was “hauled off to the U.S.,” but there was no official confirmation from the new kakistocracy government as to whether there was an operation or where the gold went. There was also no official confirmation on the receiving end either. Per usual, those who questioned the incident were mocked as “conspiracy theorists.” Elements of the story can be gleaned here.

Meanwhile, as Ukraine’s currency, the hryvnia, collapsed, the central bank duly reported 42.3 tonnes of gold in its vault. Then, suddenly, the head of Ukraine’s central bank let it slip in a TV interview that the vaults are essentially empty.

The Mystery of Ukraine’s Gold

The question begs: Did the new kakistocrats of Ukraine make some kind of non-transparent deal with the Cabal psychopaths? Or were the Crime Syndicate psychopathic kleptocrats just given access to vaults and permitted to loot the gold? From the following these stories, I’ve learned to expect the worst, so the latter is my theory. I no longer think Ukraine’s gold is in so-called “official hands” anywhere.

According to one of version of the rumor, it was not just monetary gold that was removed from the country but objects of cultural and historic value. This was also gold, so-called Scythian gold. Yes, and here comes that familiar IMF looting mechanism: Washington promised to help its Goldman Sachs puppet Yatsenyuk “the Yid” obtain an IMF loan, and the Scythian gold was used to fulfill the function of securing future credit. The value of the stolen cultural objects far exceeds the value of the gold that the objects are made from and is as much as $20 billion. Without a doubt, someone somewhere in the Crime Syndicate was cut a great bargain.

The Mystery of Libya’s Frozen Accounts

Some €10 billion of Libyan government funds, frozen as part of sanctions against the late Muammar Gaddafi’s inner circle, has mysteriously disappeared from a Belgian bank sometime between 2013 and 2017, according to local media.

Back in November 2013, four Euroclear Bank accounts belonging to the Libyan Investment Authority (LIA) and its subsidiary Libyan Foreign Investment Company (LFICO) in Bahrain and Luxembourg contained some €16.1 billion in frozen assets. However, when authorities tried to seize the funds in 2017, it turned out there was only just over €5bn left in those accounts, an investigation by Le Vif weekly .

The Ukraine and its people have a severe Jewish kleptocrat and kakistocracy problem. It was manifested on Dec. 19, 2016, when Ukrainians awoke to learn the country’s largest bank, PrivatBank, had just been nationalized after its two owners used depositors’ money to build a business empire and distributed the money among Jewish organizations in Europe. Coverage on this was non-existent in the West.

PrivatBank used to be Ukraine’s largest bank with 20% of the sector and $53 billion in assets. The abuse and criminality involved is mind boggling

The “bad loans” share of PrivatBank’s portfolio was assessed at 97% by the “regulator” and at 80% by market participants. Some 97% of PrivateBank corporate loans had gone to companies linked to its two owners and principal shareholders, Gennady Bogolubov and Igor Kolomoisky. Loans to ordinary citizens and small companies were almost non-existent.

Surprisingly, the bank’s main stakeholder, Ihor Kolomoyskyi, the second richest person in Ukraine, did not raise any objections. Kolomomoyski was once the governor of the Dnipropetrovsk Oblast but had left the country. He’s well known for his dealings. The Swiss corporation Swissport accused Kolomoysky of illegal confiscation of its majority stake in its Ukraine subsidiary. Also, Crimea authorities accused Kolomoyskyi of plundering the deposits of 200,000 Crimeans.

A criminal case against Kolomoisky was started in Russia in January 2016, where he is accused of organizing murders and the use of prohibited methods of warfare. Russian President Vladimir Putin described Kolomoyskyi as a “unique crook.”

In a similar donor pattern to Oxycontin opioid kingpins the Sacklers, Bogolubov can be seen in the clip below being feted and bragging at the International Conference of Shluchim about his donations worth millions of euros to the Jewish community. And he even pleaded for more money from the audience in the video below.

This must-view scene has to be seen to be believed.

The oligarchs ran an import scam that illegally transferred $2 billion abroad during the two years leading up to the bank’s bust. Ukraine President Petro Poroshenko doesn’t seem to want to prosecute the bank’s infamous owners. In fact, just one day after PrivatBank was nationalized, his losses were compensated for by an amendment to the tax code. The amendment reduces oil-field operation charges by almost half. Kolomoyskyi still holds a large stake in Ukraine’s oil industry.

Politicians in Ukraine, like Poroshenko, depend on the Kolomoyskyi Media Group for reelection. The only losers in the deal are already impoverished Ukrainians, who will be looted to pay for the bank’s problems through bailout financing from the National Bank of Ukraine.

IMF President Poroshenko keeps Ukraine on the debt-slavery leash. The IMF is issuing a new US$3.9 billion loan (previously US$5.5 billion) to pay for the bank nationalization. Ukraine’s foreign debt will continue to climb. In reality, there is no counter to corruption, because all the usual suspects at home and abroad are working over this poor, sad, unfortunate country and its people without any end in sight.

Ukrainian “international supporters” demanded the nationalization of PrivatBank. The state’s decision was positively received by the IMF, G7 and European Union. Of course, these usual suspects have more debt with which to carry out the latest scam. Ukraine’s history suggests that after nationalization, the bank will probably be sold on the cheap to the same wash-rinse-repeat, privatize-gains/nationalize-losses oligarchs.

On Dec. 18, 2016, the bank was nationalized by the government of Ukraine to protect its 20 million customers and to preserve “financial stability in the country.” A forensic audit showed that the bank had been subjected to a large scale and coordinated fraud before nationalization resulting in losses of at least US$5.5 billion. In July 2017 the bank’s auditors, a Ukraine subsidiary of Price Waterhouse Coopers, had its audit license revoked for its alleged “verification of misrepresented financial information.”

Kolomoyskyi, on his end, is not only walking free, but is using an empty promise technique to keep his other Ukrainian assets intact. He has committed to a three-year plan to repay US$5.3 billion in shady insider loans to cover the PrivatBank losses. Given the history of Kolomoiskyi’s shifting financial obligations to the state, his vast business holdings in airlines, media and oil, and his extensive political connections, many remain skeptical as to whether the oligarch will return the money and whether the power of the kleptocrats will be contained.

According to Forbes, a number of the other cronies who got credit from PrivatBank — including Natel, Zebrina and Palmira Trading — have already begun bankruptcy proceedings. PrivatBank’s depositors cannot withdraw foreign currencies. The huge recapitalization of PrivatBank will lead to a further devaluation of the hryvnia and increase inflation.