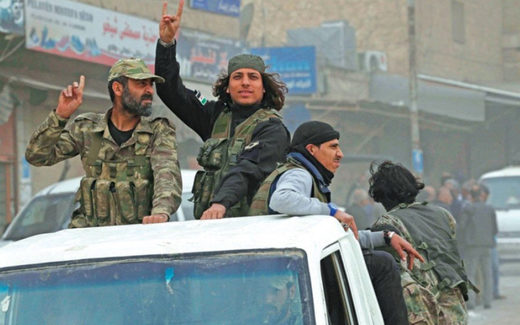 Last year, a ‘Government Information (Public Access) Act’ request was filed by two Dutch daily newspapers (Trouw and Nieuwsuur) in an effort to reveal the exact nature of the ‘aid’ that had been sent to Syria by the Dutch government between 2015 and early 2018. While the Dutch Minister of Foreign Affairs, Stef Blok, had previously said that the aid sent to Syria was “civil in nature”, the released documents revealed otherwise.

The documents, comprising about 2,000 pages in total, revealed that almost all ‘aid’ sent by the Dutch government was sent to foreign jihadist and terrorists and was of a decidedly military rather than civilian nature. Trouw reported that Toyota Hilux and Isuzu D-max pick-up trucks, ‘tactical vests’ for weapons such as the M-16 and AK-47, food packages, generators, furniture, laptops, satellite telephones, mattresses, backpacks and cameras were all part of the ‘aid’. Once in the hands of the terrorists, laptops were used to select military targets, while pick-up trucks, tactical vests, telephones and cameras were all used in assault missions against the Syrian and Russian militaries, not to mention the Syrian population. The rest of the material provided comfort to the terrorists.

While Foreign Minister Blok refused at the time to mention the names of the groups that received aid on, saying that to do so could “potentially endanger their lives”, the released documents revealed the names, which included the Levant Front (Jabhat al-Shamiya), Hama Rebels Gathering, Brigade 51, Mujahedi Horan, Sultan Murad Brigade and the Free Idlib Army. A spokesman for the Dutch Foreign Ministry was forced to admit that this was a mistake: “If you discovered these names this way, then we made a mistake that we shouldn’t have made”. The documents were removed from the internet on November 21st, 2018.

Representatives of the terrorist groups told Trouw and Nieuwsuur that they are very happy with the support of the Dutch government (and by implication the Dutch people) and that they are using the equipment for battle. The Dutch Broadcast Foundation, NOS that these terrorist groups were seen putting machine guns on pick-up trucks in videos uploaded to their YouTube channel. These were the same type of trucks that were sent by the Dutch government.

In the documents, the Levant Front – a coalition of al-Qaeda and Salafi terrorists – was specifically mentioned in a supply agreement of several pick-up trucks that were were delivered on February 9th, 2018. 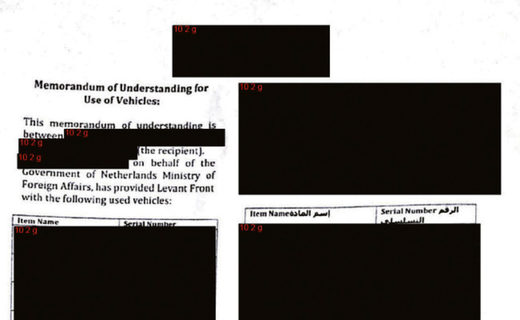 Dutch government document reads: “The memorandum of understanding is between [redacted] the recipient]. [redacted] on behalf of the Government of Netherlands Ministry of Foreign Affairs, has provided Levant Front with the following used vehicles:”

This particular terrorist group has been accused of executions, rapes, torture and abductions by various human rights organisations.

An article written by independent journalist Eva Bartlett in August 2017 mentions an interview between independent British journalist Vanessa Beeley and Ahmad Aldayh, a Syrian shopkeeper, who had been imprisoned for seven weeks by the Levant Front in East Aleppo. The shopkeeper told Beeley:

“I was eyewitness to one execution: A young man, the only child in his family, was arrested because the terrorists found on his mobile phone a photo of his friend holding the Syrian flag. They tortured him for more than four hours and then executed him.

We were all treated very badly. One woman begged three times for food and said she was starving. The warden ordered the prison guards to torture her for three hours as punishment for complaining. Just before the Syrian Army fully liberated the area and the Eye Hospital on the 4th December 2016, 22 other prisoners were executed. They were also about to throw another prisoner off the roof of the building but the Syrian Army advance was so fast they fled without killing him.”

These are the monsters that secretly received Dutch taxpayer-funded military supplies from the Dutch government. No wonder Foreign Minister Blok refused to say where the ‘aid’ was going.

On September 7th, 2018, the Dutch Ministry of Foreign Affairs announced they will cease support for ”Syrian opposition groups”, on the basis that President Assad seems to be winning the war and that continued support for the “opposition groups”, aka terrorists, would be pointless. The Ministry added that information published byTrouw and Nieuwsuur made them believe that stopping the support is the right decision. That is to say, only when Dutch government support for terrorists was publicly revealed did the Dutch government decide it was a bad idea to continue the support.

When the documents were deleted in November 2018 after the accidental exposure of the names of the terrorist groups, they were republished with three more sections redacted. However, Trouw and Nieuwsuur again discovered that not all state secrets were removed. Foreign Minister Blok responded by saying again that he will look into external technical expertise to make sure this mistake will not be repeated.

But it’s a little too late. It’s clear that the Dutch government is complicit in the many deaths of innocent Syrian civilians, and the torture and pain caused by Western-backed Islamic terrorist groups. While millions of Euros of Dutch taxpayers’ money was being funneled to murderers and rapists in Syria, one in five households in the Netherlands is experiencing difficulty in making ends meet, and the number of homeless people has doubled in the last 10 years (from 18,000 in 2009 to almost 40,000 in 2019).