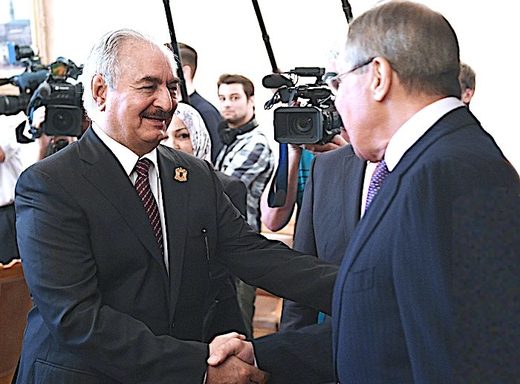 Talks in Berlin between warring Libyan factions could finally deliver a lasting ceasefire after a decade of chaos ushered in by NATO regime change there. Could the mediation efforts, kick-started by Moscow and Ankara, bear fruit?

All eyes in Europe and beyond are set on Berlin, as PM Fayez al-Sarraj of the Government of National Accord (GNA) and Field Marshal Khalifa Haftar of the Libyan National Army (LNA) arrive on Sunday for peace talks hosted by Germany and attended by representatives from 11 countries, including Russia’s Vladimir Putin.

The GNA has been internationally recognized since 2015, but Haftar’s troops now control the vast majority of Libya, with the exception of the capital, Tripoli, and surrounding areas. Both emerged from the ashes of NATO’s 2011 intervention, which backed Islamist militants from Benghazi seeking to overthrow the government of Muammar Gaddafi. But after NATO jets bombed Gaddafi’s forces and the rebels surrounded and murdered him, the militants turned on each other, and Libya was plunged into chaos and civil war.

The consequences of the collapse weren’t limited to the Libyans. Migrants from Sub-Saharan Africa used the anarchy to stream across the Mediterranean to Europe, even at the risk of warlords capturing them for open-air slave markets in Libya and of crowded vessels drowning people en masse on the way. The US was affected as well, when militants attacked its consulate in Benghazi in September 2012, killing four Americans, including an ambassador. Then, Islamic State (IS, formerly ISIS) terrorists popped up, laying claim to the city of Sirte.

Eventually, Haftar’s army arose in the east, loyal to the legislature in Tobruk that was challenging the legitimacy of the GNA. In 2016, he launched a campaign to retake the country from warlords. It was largely completed by April 2019, whereupon he turned his sights from the ruined country on to Tripoli.

Fast forward to 2020, and the conflict has reached its boiling point. Several world nations have declared support for one of the opposing sides, and Turkey in particular is ready to commit its troops to the GNA, sending its military specialists to train Haftar’s rivals. But Ankara is not alone, with Greece now threatening to send a “force” of its own to back up Haftar against Turkey. It’s an open question as to what Egypt and the Gulf monarchies – which have been backing the ex-Gaddafi general for years – would do if a proxy war did break out.

While Europe has for years been alarmed about the developments, being constantly reminded about the consequences of the intervention, the same cannot be said about those across the ocean. Washington suddenly became interested in Libya again only when Haftar’s conquest of Tripoli appeared imminent, even though that offensive apparently became bogged down in the intervening months. Reports claimed that President Donald Trump called Haftar – a Libya-US citizen – to support his campaign and sent diplomats to reach out to him. Whatever diplomacy was involved, it got nowhere, while the State Department became preoccupied with blaming the alleged “destabilizing Russian presence” for Libya’s woes.

The actual push for peace came from Moscow and Ankara, which, despite not seeing eye to eye on conflicts in the Middle East, have clearly become close enough to work out common ground.

The effort culminated with a conference in Moscow, in which foreign ministers Sergey Lavrov and Mevlut Cavusoglu mediated political talks between al-Sarraj and Haftar, while defense ministers Sergey Shoigu and Hulusi Akar handled the military side of things.

The event did not result in a signed ceasefire agreement, but marked a significant development. Just a week earlier, Haftar had outright rejected a joint ceasefire call from Putin and his Turkish counterpart Recep Tayyip Erdogan, going so far as to declare jihad against Turkish forces sent to Libya to prop up the GNA. Attempts by Italy to mediate between the two factions likewise came to naught, as al-Sarraj refused the invitation when he found out Haftar would be in Rome.

Now, German officials are confident that a deal can be reached when both leaders sit down in Berlin, with Foreign Minister Heiko Maas publicly saying that Haftar is “in principle” ready to commit to a ceasefire.

Lavrov has expressed cautious optimism, saying that he hopes “everything goes as planned” in Berlin. He did note on Friday that Haftar and al-Sarraj “don’t even want to be in the same room,” and urged both leaders not to “repeat their previous mistakes and don’t begin putting forward additional conditions, and blaming each other.”

But it’s not just the GNA, the LNA, Moscow and Ankara on which the prospect of peace depends. The warring sides will have to take up the job of negotiating the plan with factions on the ground.

It’s also the political will of Western governments, some of which are clearly wary of Russian diplomacy taking center stage, that the leaders will have to take into account.

After the US tested the waters by reaching out to Haftar before backing off, Russia is probably the only nation that commands enough respect from both factions to make it an effective mediator, Grigory Lukyanov, a senior lecturer at the Moscow-based Higher School of Economics, told RT. Putin taking part in the Berlin talks is undoubtedly a strong signal that Moscow is serious about finishing the business and bringing about a lasting peace, including by working with key player Turkey.

It remains to be seen whether Russia’s central role in solving this crisis is recognized and political wisdom prevails over jealousy and mistrust in Berlin on Sunday.