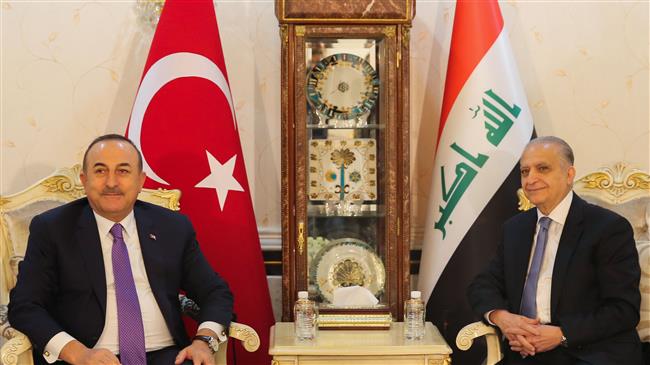 Iraqi Foreign Minister Mohammad Ali al-Hakim has stressed the need for US and other foreign troops to leave Iraq as a backlash grows over the recent American assassination of a top Iranian general in Baghdad.

The top Iraqi diplomat made the appeal during a joint press briefing with his Turkish counterpart Mevlut Cavusoglu in Baghdad on Thursday.

Hakim and Cavusoglu strongly condemned the US assassination of Iran’s Lt. Gen. Qassem Soleimani and senior Iraqi commander of the Popular Mobilization Units Abu Mahdi al-Muhandis, both key figures in the fight against Daesh and other Takfiri terrorists in the Middle East.

“Iraq insists on maintaining its sovereignty and territorial integrity and the complete withdrawal of foreign forces,” the top Iraqi diplomat said.

He added that talks with his Turkish counterpart focused on the need to respect Iraq’s sovereignty from all sides.

“Iraq condemns the attacks on Iraqi land, which harms the sovereignty of our country as well the security of Iraqi people. They are against the international law,” the Iraqi minister said.

The top Iraqi diplomat said any escalation of tensions in the region could result in the re-emergence of Takiri terrorist groups.

The Turkish foreign minister, for his part, said Ankara does not want Iraq to become a battleground for foreign forces.

Cavusoglu added that Iraq was not alone and Turkey was there to overcome difficult days together.

Turkish foreign minister also spoke with his Iranian counterpart Mohammad Javad Zarif Wednesday after Tehran fired dozens of missiles at two military bases hosting US troops in Iraq. The missiles were fired at the Ain al-Asad base in Anbar province and another base in Erbil.

In another development, Qais al-Khazali, the leader of Asa’ib Ahl al-Haq movement, a subdivision of Iraq’s Popular Mobilization Units, known by its Arabic name as Hashd al-Sha’abi, denied any involvement in the recent firing of rockets at Baghdad’s Green Zone where the US embassy is located.

Two Katyusha rockets struck Baghdad’s heavily fortified Green Zone on Wednesday, landing near the US embassy but causing no casualties, according to the Iraqi military.

Al-Khazali also said it was time for an Iraqi response to the recent US assassination, adding the reaction will be “no less in size” than Tehran’s missile strikes on two American bases in Iraq.

On Sunday, Iraqi Prime Minister Adel Abdul Mahdi called the US airstrike “a political assassination”. He also underlined the need for a timetable to withdraw all foreign troops “for the sake of our national sovereignty.”