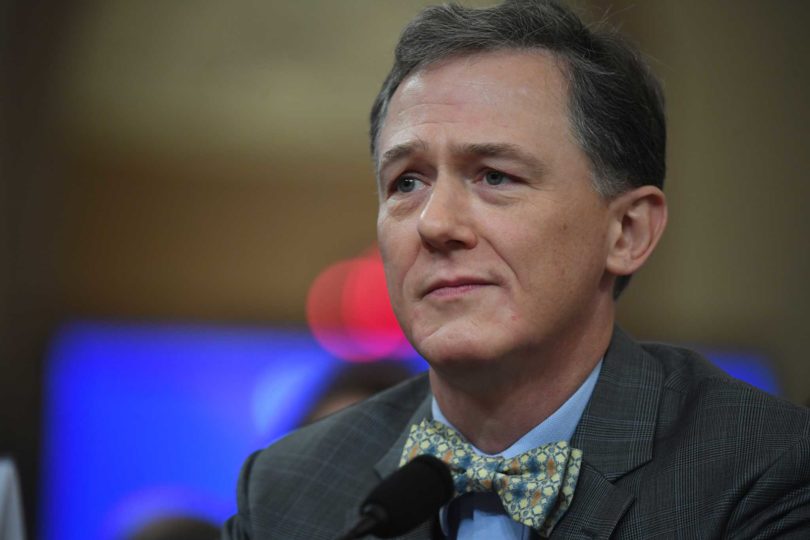 What do we know about the US Deputy Chief of Mission in Ukraine George Kent, also called a supervisor of anti-corruption agencies in Ukraine? Special Report ” Strana.ua”

As was reported before, Ukrainian political party “People’s Front” (Narodnyi Front) names the US Deputy Chief of Mission in Ukraine George Kent as a supervisor of the NABU on behalf of the US government. We decided to look into this.

“Today we’ve beat the system”, said ex-deputy Nikolay Martynenko walking confidently down the yard of the Solomenskyi district court of Kiev and not hiding his emotions. Just a few minutes ago, the investigating judge Alexander Bobrovnik rejected appeal of the prosecutors of the Specialized Anti-corruption Prosecutor’s Office (SAPO) to detain Martynenko and released him on parole guaranteed by the Ministers and deputies.

Over the last two days, Martynenko’s parole guarantors have been trying to convince the court that the NABU was having a political battle against the former deputy. They also added off-record that the NABU in its so-called anti-corruption struggle is supervised by the American Embassy.

“The group of people overseeing NABU activities use it as a political tool to fight against competitors and cause early parliamentary and presidential elections”, Martynenko said. A little later he clarified that he was talking about the “Georgian mafia”, which according to him trumps-up Bureau cases (probably he referred to the Deputy Head of the NABU Gizo Uglava, close to Mikhail Saakashvili and former deputy prosecutor David Sakvarelidze).

However, one of the People’s Front deputies, close to the party’s management, mentioned a non-Georgian name of someone who supposedly supervises the NABU. According to him, it is the above-mentioned George Kent.

Mr. Kent has already served in Kiev before as political section’s Deputy Head at the US embassy from 2004 to 2007. In 2014-15, George was the Senior Anti-Corruption Coordinator in the State Department’s European Bureau, leading development and advocacy of anti-corruption messages across Europe and Eurasia (establishment of anti-corruption agencies in Ukraine was his key area of expertise). After that, he returned to Kiev to take a higher position.

Since joining Foreign Service in 1992, he has served on behalf of the US government in Poland, Thailand and Uzbekistan. He has three children and speaks fluently 7 languages: English, Russian (George Kent holds a bachelor’s degree in Russian history and literature from Harvard University), Ukrainian, Thai, Polish, German and Italian. He is also an honorary member of the Red Sox Nation fan club of the Boston baseball team.

George Kent’s Facebook page has plenty of photos featuring Ukrainian customs, traditions and Ukrainian cuisine. His apartment in Kiev is decorated with traditional Ukrainian embroidered cloths and he shares photos of them with his friends. He also posts pictures and of his clothes with Ukrainian and Crimean Tatar symbols.

His wife Velyda is with him on his FB pictures. In 2016, they celebrated their 20th anniversary. Velida Kitaina was born in Uzbekistan, but has Crimean Tatar roots. Her grandparents were deported from Crimea to the Central Asia in 1944.

Last year for Christmas, his wife made a ginger biscuit in the shape of the Mikhailovskyi Cathedral of Kiev.

George Kent himself is a frequent guest at Kiev public events. Recently he participated in the opening of a local grocery store, a scientific symposium on health protection, American movies screening, to name a few.

People’s Deputy of Ukraine Sergei Leshchenko once posted his photo with George Kent on his Facebook page (when he was still working at the State Department), saying that Mr. Kent was a good friend of Ukraine.

Our source thinks that George Kent is working for the US Intelligence. He is convinced that Kent had a role to play in the Orange Revolution during his first term in Kiev as political section’s Deputy Head.

“Kent supervises the NABU. He brought Storch (Robert Storch, US citizen and candidate for the position of independent auditor at the NABU) to official and unofficial events”, admitted the source.

A representative of the anti-corruption NGO, who knows Kent, shared with “Strana.ua” an amusing story about Storch.

“Storch and Kent attended Rada’s Anti-corruption Committee hearing to select an independent auditor of the NABU. Talking about the procedure and candidates, Yegor Sobolev (Head of the committee) said that at first nobody applied, so he called the US embassy asking them to suggest a candidate. They recommended Mr. Storch, and after the meeting Mr. Kent politely, but firmly said, “The diplomatic mission did not invite anyone and Storch is a private person”. As far as I got it, Yegor missed the mark with this”, said the source.

A diplomat who personally knows Kent described him as a “puppet master”. “He knows ins and outs of the Ukrainian politics. He gives recommendations to some people and instructions to the others”. He is nice to those who follow his advice. At the same time, he is a sociable guy and a good family man”, told us the source.

According to him, the position of the Deputy Head of the mission is high enough for the leading Ukrainian politicians to listen to him. “Yovanovitch, for instance, can’t visit Yatsenyuk at the Carnegie center at night (the Carnegie center hosts the office of Arseniy Yatsenyuk’s “People’s Front” ). And Kent will do it, and they will listen to him”, said the source to “Strana.ua”.

However, the anti-corruption community believes that influence of the US embassy and its representative George Kent on Ukrainian politics is overrated.

If the “People’s Front” (Narodnyi Front) is referring to the Martynenko case, as far as we know, proceedings against him are still open in three European countries. “This makes absolutely no sense to trace it back to the US”, said the Head of the Anti-Corruption action center Vitaly Shabunin.

“Strana.ua” reported earlier that “People’s Front” (Narodnyi Front) deputies think that George Kent acts at his own peril, and doesn’t take instructions from his Washington bosses. And Martynenko’s detention is the result of his initiative, and not the US strategy. Based on this, Kent is a puppet master just like the main character of the famous novel by Graham Greene “The Quiet American.”

However, one Ukrainian diplomat, familiar with the work of the US embassy and the State Department doesn’t support this claim. “Naturally, as a person well aware of Ukrainian reality, George Kent can act on his own when it comes to certain tactical issues, but the anti-corruption strategy is approved in the US and is implemented regardless of people behind it. It basically comes down to taking the power and financial flows away from the politicians involved in Ukrainian business, since the way the West sees it, it will reduce corruption levels and, in the long run, pave the way for large transnational corporations, as already happened in Eastern Europe”.

“The U.S.-Ukrainian relations are at a standstill. Ukraine is not on the State Department’s immediate agenda, so any official at the US embassy could deal with some important questions on his own, but the strategy, in any case, has been long defined in Washington. US officials are just following it. It could change under the new Administration, but this has not happened yet”, says political analyst Ruslan Bortnik.

“Strana.ua” sent requests for comment to the US Embassy in Kiev and George Kent’s Facebook page and will publish the answer when available.