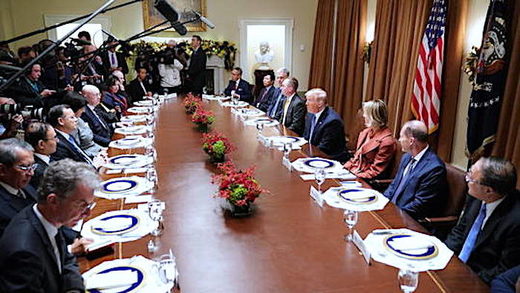 Moscow’s envoy to the UN joked to Donald Trump about the White House’s interior after touring the US president’s residence. The two also discussed the ongoing visa dispute.

Vasily Nebenzya was given a tour of the White House on Thursday as part of a reception hosted by the president to mark the start of the US’ rotating tenure as chair of the UN Security Council. The Russian diplomat thanked Trump for his hospitality, but had one cheeky criticism of the White House.

“We saw the China Room, but we didn’t see the Russia Room yet,” Nebenzya told the US leader, adding that perhaps it was a “top secret” area in the residence.

Not missing a beat, Trump replied: “Oh, well, we’ll have to take care of it.”

The friendly banter was followed by more serious business, however. Nebenzya also pressed Trump about Russian delegates to the UN General Assembly not being issued visas to carry out their duties in the United States. Moscow has accused Washington of deliberately stalling their visa applications.

According to the Russian envoy, Trump said that he wasn’t familiar with the issue and promised to “deal with it.”