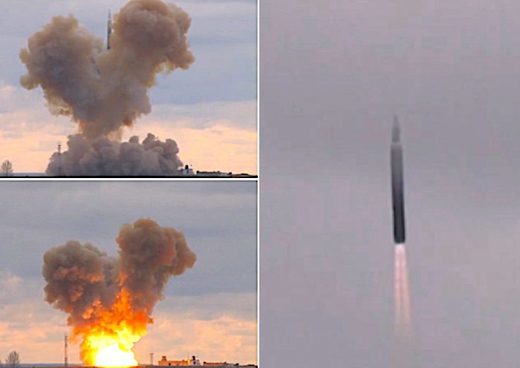 Moscow’s deployment of ‘Avangard’ hypersonic warheads means the US missile defense installations in Europe are now obsolete – and that Washington would have to spend a lot of money it doesn’t have in order to catch up.

Video released by the Russian defense ministry on Friday shows the hypersonic glider warheads being loaded onto silo-based missiles. For now, the Avangards will be mounted on the UR-100N (or SS-19 Stiletto, as NATO calls them) ballistic missiles, until the RS-28 Sarmat is ready to enter service.

Hypersonic weapons fly far faster than the speed of sound. Avangard is capable of reaching Mach 27 without losing control or disintegrating under heat and pressure. This means that the weapon can outmaneuver any defenses on its approach phase, rendering it “absolutely invulnerable to any air or missile defense system,”in the words of Russian President Vladimir Putin.

“We don’t have any defense that could deny the employment of such a weapon against us,” is how General John Hyten, then head of the US Strategic Command, put it to the Senate Armed Services Committee in March 2018, shortly after Putin confirmed the existence of Avangard and several other weapons.

In a major show of confidence, Moscow even showed off the Avangard to US inspectors last month, as part of an effort to improve transparency in observing the last remaining treaty limiting nuclear weapons. Russia has offered to extend the New Start treaty beyond February 2021, but Washington has yet to respond, one way or another.

Russia is the only nation that currently fields hypersonic missiles, both the Avangard and its shorter-range, airplane-launched cousin the Kinzhal. According to Putin, Russian military scientists are also working on developing defenses against such weapons – if there are any.

Earlier this week, Putin made a point of saying that Russia is now ahead of other countries when it comes to a major weapons technology, contrasting it with the Soviet Union always being a step behind during the Cold War.

Instead, now it is the US that is scrambling to catch up. A contract to develop a glide body capable of Mach 5 – was just awarded earlier this year, with the expected launch date of sometime in 2023.

Avangard’s existence also puts more urgency into developing space-based interceptors that could theoretically target missiles during the boost phase, before the hypersonic warheads can be unleashed. This may be the mission of the newly established ‘Space Force.’

It was also the stuff of Pentagon fantasies in the 1980s, when President Ronald Reagan launched the ‘Star Wars’ initiative. While it did not amount to much in reality, it is conventional wisdom in the US that it drove the Soviet Union into a costly arms race that ultimately led to bankruptcy and the collapse of Communism.

While Russian scholars dispute this, Moscow appears to have just put it up to a test. Hypersonic weapons may now compel Washington to act just like it says the Soviets did, and pour vast resources into the military that are needed elsewhere, while the national debt stands at $23 trillion and counting. One more reason to be serious about making peace with the world, rather than seeking to dominate it.

Russia is more conscious about its military spending, which is far lower than in the US – in both absolute and purchase power parity terms – yet a lot more of it goes on procurement of new weapons systems.

Moscow now has at least a 10-15 year window of guaranteed nuclear deterrence, political scientists Sergey Karaganov and Dmitry Suslov argued recently in the journal Russia in Global Affairs. In other words, global thermonuclear war just got much less likely, for a while at least. That’s good news for the season, no matter how you slice it.