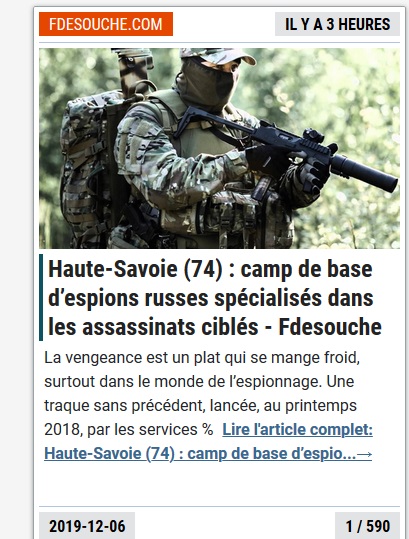 The General Directorate for Internal Security (ISB) and counter-intelligence agencies of France, Germany, Switzerland and their American partners have discovered a ‘military base camp’ deep in a mountainous region of the Haute-Savoie, and in cities such as Annemasse, Evian and Chamonix, and in the most isolated villages.

The camp, they say, is Russia’s military base.

The above mentioned agencies, reported by the Le Monde magazine, striving for truth and democracy, got together a list of names known to the Western media of the “GRU operatives” who set up this ‘base camp.’ The list includes two dudes who failed to poison the British spy Skripal and his daughter. As you recall, the counter-intelligence in this case successfully detained and executed one of Scripal’s cats with second cat escaping the deathly grip of British justice. Also, on this list are two losers accused in failed attempt to topple the government in Montenegro.

The counter-intelligence agencies claim that they and 11 others are members of the assassination unit and they are traversing Europe in search for someone to kill. That they have not killed anyone yet, that they failed every single time, and that their faces, passports scans, and life stories are all over the thing the West calls ‘internet,’ doesn’t deter their commanding officers back in Moscow to pay for their first class tickets to fly to Alpine ski resorts, and for the EU authorities to keep issuing them the visas.

Germany is preparing to add another name to the 15, accused in killing an Islamic terrorist slash NATO proxy mercenary. This one was arrested, praise jebus, and said to be a murderer who were jailed in Russia for murder, while serving, according to Frau Merkel, as a GRU officer.

Theoretically, if someone has government’s ‘license to kill’ like James Bond, one isn’t expected to be convicted by this country’s court, but Germans are all about practice.

Inserted inside the Le Monde article is the plausible deniability clause : “No trace of operations of this GRU unit has been detected in France.” It’s buried so deep that by the time an average reader reaches it, he already is so hot under his collar he is ready to grab his baïonnette and to go to war against Russia.

And that is exactly the reason why the Western regimes continue inventing this utter garbage.

It’s also the reason why you should pay attention, especially if you live in the Northern hemisphere. Everyone living in the Southern hemisphere with the exception of Australia and New Zealand can sleep soundly and attend a business of having a hearty good breakfast with no reservation about this approaching war. It, most likely, won’t reach them. In unlikely event that it does, it will only be to their improvement, since their lives are beyond deplorable, as is. Or, so we are told.

You want to know why this Russia’s military ‘base camp’ failed to attract any attention from the locals, as the Le Monde laments?

Because it’s imaginary, you say? Yes and no. Because this is the exact location on the EU map from where Russia’s invasion of Poland will commenced, so the locals won’t pay any attention till the very time they are told to do so.

I bet you your chocolate cake, that before the start of the war against Russia you will see gathering of armed men wearing khaki outdoorsy outfits and speaking with highly suspicious Slavic accents. The local authorities will be unable or unwilling to stop them while they will gather a small army and march to invade Poland. They will have flags colored in colors of Russia and they will be giving interviews to any Western reporter who happened to cross their path explaining that they are from the highly secretive GRU unit and that Medvedev personally commanded them to liberate Poland.

If you think this scenario is far fetched, you have not yet read my research Pokemon in Ukraine, where I describe and illustrate a similar scenario from the same Game masters that played out in Ukraine in 2014 with a smashing success.

You can get it here for free

As the day progressed, the Ruptly producer was detained and interrogated under the Terrorism Act in London, with the officers searching him and his belongings. Before being released, the man was told that Ruptly’s accreditation at the NATO summit had been revoked. Before the sun went down on this mess, Russian vessel “Sevastopol” sanctioned by the US, was arrested by the authorities of the port of Singapore

Add to this 6000 Russians arrested and hold in jails of different countries, ongoing theft of Gasprom assets in Europe and ban on Russia’s athletes to take part in the next Olympic games, and you get the picture of ‘death by million cuts’ that the multiple nations around the world are executing together against us.

They all, all of them together are convinced that Russia has nothing to fight back against them.

You might tell me, “But, Scott, these are all routine every day cold war against Russia. All Russia is willing to do is to send some diplomats back home. Russia is under Rothschild control via its central bank.”

And I will tell you that we have to watch for the “We Are All Going to Die!” effect.

Some time ago, I described how deaths of some liberals were hugely beneficial to their own cult. So beneficial, in fact, that the count of the liberals in Russia started to go down like an altitude metering device inside a shot down jet. In other words, very fast, with the benefits of their deaths to their comrades decreasing even faster. It came to the point when three dead liberals were needed to cause same volume of outcry as one dead liberal a few years ago.

I was getting ready to write about four and five dead liberals at a pop, blamed on Moscow naturally, in a new hunting season, when one of their leaders screamed “We Are All Doing To Die!” and that was it. Killings stopped. Whatever it was behind it, listened.

With claims of Russia’s military bases in Europe, they are raising the stakes, now.

The same exact effect we observe every time the Western government officials and their corporate media make up a story about multifarious GRU officers camping out in the Alps and mysterious “Wagner Private Army” coming down from the Alpine spy resorts to invade Poland, the public outcry is speedily diminishing. Theresa May’s government managed to push other countries to expel hundreds of Russia’s diplomats, and Russia expelled thousands of theirs. The West imposed economic illegal trade restrictions based on the fictitious events they themselves made up and staged, Russia retaliated with her own sanctions. The Western countries and their allies kidnapped and jailed over 6000 Russians and their numbers are growing daily. Russia jailed less than a dozen. More Russian tourists abroad are being killed and maimed in suspicious ‘accidents.’ Clearly the words “Kill Russians everywhere you meet them,” have been heard.

It will be getting worse and worse, and now we see that the collective West is bringing their terminal scenario. they are going to gather an army of Russian impersonators and start an invasion of Poland (or Estonia, Latvia or Lithuanian, or any other inkspot on the map) to attack Russia.

It worked in Ukraine, when a group of people, whom I described in my research, mostly mercenaries, outlaws, actors, writers, and movie producers, came and acted for the cameras in Donbass. New Kiev regime, and everyone in the world declared them to be the Russian government invasion. So, when a similar group of actors and mercenaries will show up in Poland et cetera, it WILL be declared the RUSSIAN INVASION, and NATO will start the war as it was said during the NATO London summit, I bet you your chocolate cake.

This Le Monde article is the road map for this new HUGE false flag attack.

Here is the scenario for you, exclusively.

Pentagon and NATO members are preparing to release a Russian speaking group of mercenaries and actors, some of them even with Russian passports, who will be acting for the cameras as the INVASION OF POLAND.

I described in details the preparation for this Event on the territory on the Baltic here:

Michael McFaul: We declared war on Russia. What’s next?

This mercenary group’s performance will be called “the Russian invasion,” and the US and NATO will attack and Russia will respond with everything she’s got.

It’s a huge miscalculation to think that the liberals inside Russia’s government will be able to block the military response. They can’t, and they won’t.

Pentagon plans to accomplish this before 2028, you can read their reports, it’s not just my imagination.