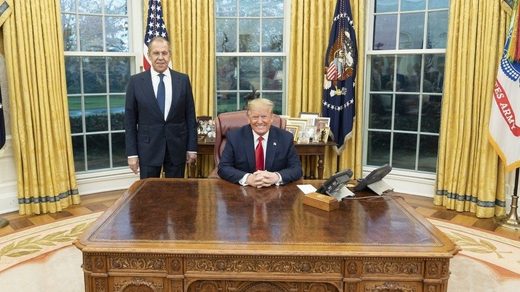 ‘Something is rotten with the state of Denmark’, or if not Denmark then certainly the United States of America. It’s the only conclusion one can draw from the way the absolutely normal is nowadays treated as the most extraordinary drama.

On Monday, US President Donald Trump met Russian foreign minister Sergei Lavrov. It’s about as normal a diplomatic event as one could possibly imagine, but it caused much of the American commentariat to go into a collective meltdown.

‘Trump welcoming Russia’s top diplomat to the Oval Office is one of his most brazen moves yet,’ declared the Washington Post, which makes you think that Trump really needs to step up his game on the brazenness front. The Post isn’t alone in thinking this way, however. What one might call the ‘liberal’ TV channels leapt on the story too, dragging in some representatives of the American security apparatus to ram home the point (there was a time when liberals regarded the FBI and CIA with suspicion, but such days are apparently long gone).

And so it was that CNN brought on as a guest former FBI deputy director Andrew McCabe to ‘explain why the photograph tweeted by President Trump of his meeting with Russian foreign minister Sergei Lavrov is so extraordinary.’ As McCabe told CNN:

There’s no doubt there’s something deeply odd about the way this president interacts with Russia. We’ve never seen anything like this before. … Russia is our most significant enemy on the world stage. … I don’t think that we’ve ever seen a photograph out of the Oval Office on the lines of the one we saw today.

Meanwhile, MSNBC had its own star witness, former Under Secretary of State Richard Stengel. ‘Why is a head of state meeting with the Russian foreign minister?- asked, ‘Vladimir Putin doesn’t meet with Mike Pompeo when he comes to Moscow. So it’s very curious and it’s very strange.’

Actually Rick, dear boy, Putin does meet with Pompeo, as you can see from this photo here. But when did one ever let little details like factual accuracy get in the way of a good line? 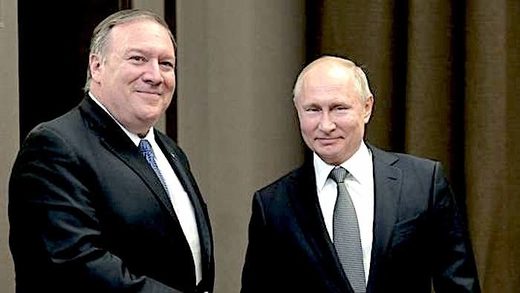 Stengel wasn’t MSNBC’s only witness to Trump’s suspicious behaviour. Former US ambassador to Russia Michael McFaul also put in an appearance. ‘He’s obsessed with the East, like a certain world leader in the 1940s was obsessed with the East. Why is this guy obsessed with meeting with Russians all over the place’, the host asked McFaul. The latter let pass the gratuitous Hitler comparison, and gave his learned response: ‘It’s truly bizarre. I confess I do not have a rational explanation for it,’ said McFaul.

Just in case you think it was only the media, FBI, and the State Department, others were on the ball too. The Trump-Lavrov meeting had Twitter abuzz. Anne Applebaum, for instance, had the following to say.

This apple has fallen far from the baum

It’s all simply nuts. Trump is Hitler. A former ambassador can’t think of any reason why representatives of two major powers might wish to meet. A former deputy head of the US foreign service thinks that heads of state never meet foreign ministers. And all of them believe that a photograph of the US President and the Russian foreign minister is totally unprecedented and suggestive of something deeply suspicious, though exactly what they can’t quite tell us. Which makes you wonder what they’d all make of this picture.

I don’t know about you, but that looks a lot like Sergei Lavrov and President Obama to me. So, was Obama a Russian agent? Was he secretly selling out US interests to a foreign power? Should we be investigating him as well? It’s all rather suspicious, don’t you think?

I’ll leave the last word to the excellent Fred Weir of the Christian Science Monitor:

It’s pretty clear by now that no normal dialog is going to be possible between Russia and the US. Perhaps ever again. It’s not my job to advise the Russians what to do, but if it were I would suggest they just give it up. Spend your time going to Beijing, Delhi, Ankara, even Berlin and Paris, but give Washington a miss.

It’s the most peculiar damned thing I have ever seen. Even at the lowest depths of the Cold War, the Washington Post would never have run a headline that described a US president meeting a Soviet leader in the Oval Office as “one of his most brazen moves yet.”

Analyzing the official photo of Trump and Lavrov in the Oval Office, the main — disapproving — takeaway the WaPo has to offer here is: “Judging by the expressions on their faces, the conversation does not seem to have been particularly acrimonious.” Geez.