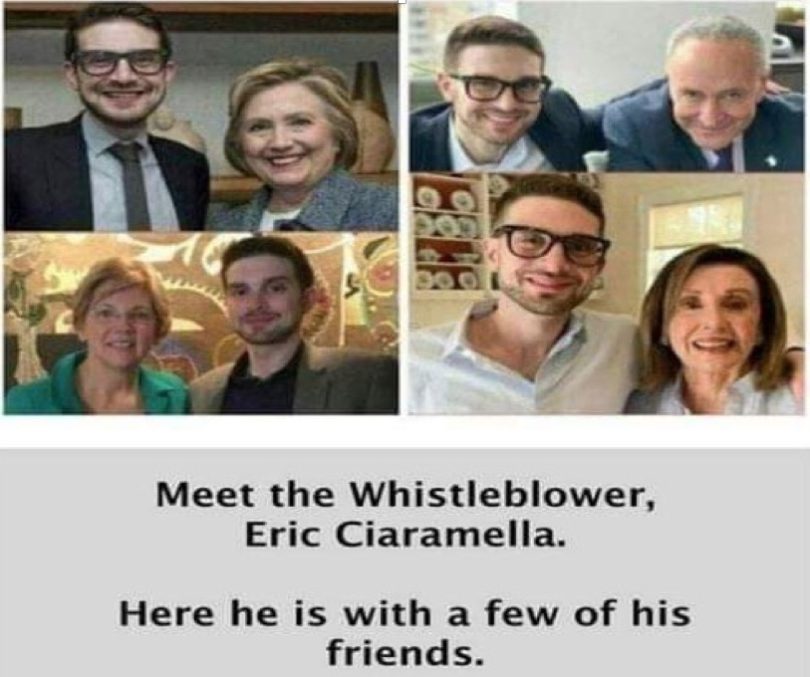 Former United Nations weapons inspector Scott Ritter, who (along with Lyndon LaRouche) had exposed the “Iraqi WMD” hoax before Bush-Cheney’s 2003 invasion, has now performed another great service for his country and the world, at another moment of maximum crisis. In a lengthy article posted yesterday on Consortium News, Ritter presents a deeply-sourced picture of who the so-called “whistleblower,” really is, “the Unnamed” who has now triggered impeachment proceedings against the President of the United States. No one who is serious about the immediate danger to the United States and to world peace, will fail to read every word of this article.

Ritter lays out the gravity of the case he will present in three paragraphs: “…the whistleblower complaint has opened a window into the politicization of the intelligence community, and the corresponding weaponization of the national security establishment, against a sitting president.

“As I shall show, such actions are treasonous on their face, and the extent to which this conduct has permeated the intelligence community and its peripheral functions of government, including the National Security Council and Congress itself, will only be known if and when an investigation is conducted into what, in retrospect, is nothing less than a grand conspiracy by those ostensibly tasked with securing the nation, to instead reverse the will of the American people regarding who serves as the nation’s chief executive.

“The key to this narrative is the whistleblower himself. Understanding who he is, and what role he has played in the events surrounding the fateful July 25 telephone conversation, are essential to unravelling the various threads of this conspiracy.”

After graduating Yale in 2008 with a degree in Russian and East European studies, post-graduate study at Harvard. and work experience with the World Bank, the so-called whistleblower went through the CIA’s four-month Career Analyst Program and was assigned to the Office of Russian and Eurasian analysis (OREA) in the CIA’s Directorate of Intelligence. This was the period of the so-called “reset” under Obama’s Russia advisor Michael McFaul, who was trying to manipulate differences between then-Russian President Medvedev and Prime Minister Putin. When Putin returned to the Russian Presidency in 2012, this group began to plan what became the 2014 fascist coup in Ukraine.

It is clear that the “whistleblower” was in the center of the coup-planning, since in July, 2015, as a very young man—a kid, really—he was detailed to the NSC staff at the Obama White House as the Director for Ukrainian Affairs. Such NSC positions were intended for senior analysts at the GS-15 civil service level, but the “whistleblower” was given a waiver to assume the post as a GS-13. His candidacy had to have been approved both by Peter Clement, director of OREA, and CIA Director John Brennan.

In this position, the whistleblower reported to Charles Kupchan, Senior Director for European Affairs at the NSC, who reported directly to Obama’s National Security Advisor Susan Rice. His arrival at the White House coincided with the start of the Trump candidacy; like everyone on the White House staff, the whistleblower was shocked by Trump’s election victory in Nov., 2016. Susan Rice was alarmed by activities of the Trump transition team. She closely monitored the investigation into so-called Russian interference in the election, and began to order the “unmasking” of the identities of Trump-related Americans in foreign intercepts.

When UAE Crown Prince Mohammed bin Zayed visited New York to meet with Trump transition officials, amidst rumors that he could be a Trump backchannel to Russia, Rice ordered unmasking of intelligence reports pertaining to that visit. The principal NSC staffers who would logically have advised her were Kupchan, the whistleblower, and his close friend Sean Misko, NSC director for the Gulf States. Thereafter Rice ordered near-continuous unmasking of intelligence reports involving Trump’s National Security Advisor Michael Flynn—logically advised by the same group.

The incoming National Security Advisor intended to slash back the bloated NSC bureaucracy which was making policy on its own—as part of the “interagency” represented by the witnesses against Trump on impeachment—and return policy-making to the President and the Cabinet from the whistleblower and his friends. The whistleblower was dismayed by the changes and reportedly defensive of the Ukraine policies he had helped shape. When his immediate supervisor, Kupchan (a political appointee) left, the whistleblower was temporarily NSC Senior Director for Russia and Eurasia—one of the highest positions in the U.S. government!

The whistleblower was well-known to be opposed to Trump, and is reported to have committed acts of resistance to expose and undermine him. He was cut out of the process of Trump’s introductory telephone call to Putin in Jan. 2017, and was later suspected of having leaked two other telephone calls Trump made that day, with Mexico and Australia.

When McMaster replaced Flynn, fired because of leaks in which the whistleblower probably had a part, McMaster tried to restore the NSC functioning to that under Obama. Then, when Fiona Hill arrived in April 2017 to be NSC Director for Russia and Europe, the whistleblower was out of a job—but instead of returning him to the CIA, McMaster hired him as his personal assistant, and moved him from the Old Executive Building down the street, into the White House, giving him direct access to everything that crossed McMaster’s desk! Yet the White House refused the usual one-year extension to his two-year NSC assignment in July 2017, so the whistleblower returned to the CIA. Soon after he left, full transcripts of Trump’s Jan. 28, 2017 conversations with the leaders of Mexico and Australia were leaked to the press. While some of his NSC colleagues believed the whistleblower was behind the leaks, McMaster refused to authorize a formal investigation, which could have ended the whistleblower’s career at the CIA.

Nevertheless, despite having left under a cloud of suspicion, the whistleblower was rehired as NSC deputy national intelligence officer for Russia and Eurasia in June, 2018, right back at the center of Ukraine policy. How unusual. Director of National Intelligence Dan Coates would have approved the appointment. Once back at the NSC, the whistleblower developed professional relationships with the new director for Ukraine at the NSC, Lt. Col Alexander Vindman, with whom he appeared to share concern over Trump’s views on Russia and Ukraine. As a witness, Vindman said he shared concerning aspects of Trump’s July 25, 2019 Ukraine call with an authorized intelligence community contact, but Rep. Schiff refused to allow any discussion of that person’s identity—strongly suggesting that it was the whistleblower.

After being informed of the call, the whistleblower began preparing notes and assembling information, and made many calls to US government officials whom he knew from his official work, using a computer system approved for handling classified data. Then he began discussions with Rep. Schiff’s House Intelligence Committee staffers,. That staff included two NSC veterans, one of them the whistleblower’s friend Sean Misko. From there, he went on to the lawyers’ group “Whistleblower Aid.” One of its founders, Mark Zaid, had tweeted “#coup has started. As one falls, two more will take their place,” in Jan. 2017.

Rep. Schiff has moved from insisting on the “whistleblower’s” testimony, to refusing to allow him to testify even in closed session. Probably because he wants to avoid legitimate questions Republicans might ask.

“Namely, what was a deputy national intelligence officer of the U.S. intelligence community doing investigating activities of a sitting president? Who, if anyone, authorized this intervention in U.S. domestic political affairs by a CIA official? How did the whistleblower, who had a history of documented animosity with the Trump administration that included credible allegations of leaking sensitive material to the press for the express purpose of undermining the credibility of the president, get selected to serve as a deputy national intelligence officer? Who signed off on this assignment? What was the precise role played by the whistleblower in unmasking the identities of U.S. citizens in 2016, during the Trump transition?…

“There is, however, the major issue looming in the background of this impeachment frenzy: the intervention by elements of the intelligence community in the domestic political affairs of the United States. There is no question that the whistleblower’s complaint served as the genesis of the ongoing impeachment proceedings.

“The American people should be deeply concerned that an inquiry which could result in the removal of a duly elected president from office was initiated in secrecy by a member of the intelligence community acting outside the four corners of his legal responsibilities. The legitimacy of the underlying issues being investigated by the House Intelligence Committee is not at issue here; the legitimacy of the process by which these proceedings were initiated is….

“Impeachment is a constitutional remedy afforded to the U.S. Congress to deal with the political issues surrounding the conduct of a sitting president. If this constitutional remedy can be triggered by the intelligence community in a manner which obviates laws prohibiting the intrusion of intelligence agencies into the domestic political affairs of the United States, and done so in a manner where the identities of the persons and organizations involved, along with their possible motives, are shielded from both American people and those whom they elect to represent them in Congress, then a precedent will have been set for future interventions of this nature which undermine the very foundation of American democracy.

“The political weaponization of intelligence represents a significant threat to the viability of the American constitutional republic that cannot be ignored.”

The fascist Ukraine coup of 2014 has come home to roost in the U.S., along with its total, whole-of-society information warfare. Declassify and release all the documents concerning the Ukraine coup! Any Congressman who supports the travesty of impeachment is supporting nuclear war with Russia!