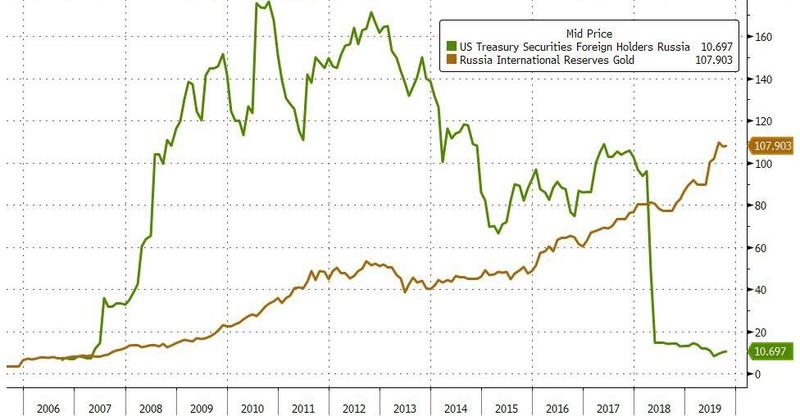 In the past two years Russia has been quite explicit in its shifting preference between fiat, in the form of the world’s reserve currency, US Dollars and hard assets, i.e., gold: after liquidating almost all of its Treasury holdings in mid 2018, roughly around the time relations between the US and Russia hit rock bottom and started digging, Russian gold holdings continued to climb and just a few months back rose to a record, more than doubling in the past 4 years.

It now appears that the recent gold-buying spree wasn’t enough, because according to Russia’s Finance Minister Anton Siluanov, Russia is now also considering investing part of its National Wealth Fund in gold, adding that it is Russia’s view that investment in the precious metal as more sustainable in the long-term than in financial assets.

“There is a discussion on whether to invest the fund’s money in gold and precious metals. There are a lot of supporters and opponents,” Siluanov said.

While Russia has traditionally been one of the world’s largest gold producers, its central bank has been the main buyer of its metal in recent years, partly as a result of Western sanctions imposed on Moscow in 2014, which forced the central bank was reducing the share of U.S. dollar assets in its reserves.

So is Russia about to double down and in addition to converting its forex reserves into gold, will start buying the yellow metal for its sovereign wealth fund too? It appears so: speaking to reporters last Tuesday, Siluanov said that the finance ministry proposes that the National Wealth Fund’s new investment structure would mirror the foreign exchanges reserves structure of the central bank and excludes gold. As of December 1, the central bank’s gold reserves stood at 72.7 million troy ounces, worth approximately $108 billion.

As a reminder, the Russian National Wealth Fund accumulates revenues from oil exports and was initially designed to support the pension system. It was worth $124 billion as of Dec. 1. It is, therefore, a key cog in the petrodollar mechanism. This means that a key player in the global petrodollar recycling pathway will instead convert its revenues from sales of oil not into dollars, but directly into gold, bypassing the current reserve currency.

As a reminder, it was in late 2014, shortly before China’s economy suffered its first major shock – and currency devaluation – of the post-crisis era, when we reported in “How The Petrodollar Quietly Died, And Nobody Noticed” that as a result of the oil price crash of late 2014, the petrodollar had suffered its first near-death experience, as petrodollar exports would fall negative in 2014 for the first time in 18 years. And while since then we have seen a modest rebound, the net exported capital remains dangerously close to zero, in effect keeping the entire petrodollar system on death watch.

Russian gold miners usually sell their metal to Russian commercial banks, which then re-sell it to the central bank. Russia’s Polyus and Polymetal, along with Canada’s Kinross, are the world’s top producers.

That said, for now, the petrodollar is safe: “The Finance Ministry does not propose (the fund) investing in the precious metals, though one could think and consider this,” Siluanov said. “My point of view is that gold might well be present when investing reserve money.”

In November, the Russian finance ministry proposed spending 1 trillion roubles ($16 billion) from the National Wealth Fund to support infrastructure projects and exports between 2020 and 2022, as it tries to boost economic growth. The government will be able to use money from the Fund once its liquid assets exceed 7% of GDP, something the finance ministry expects to happen in 2020.