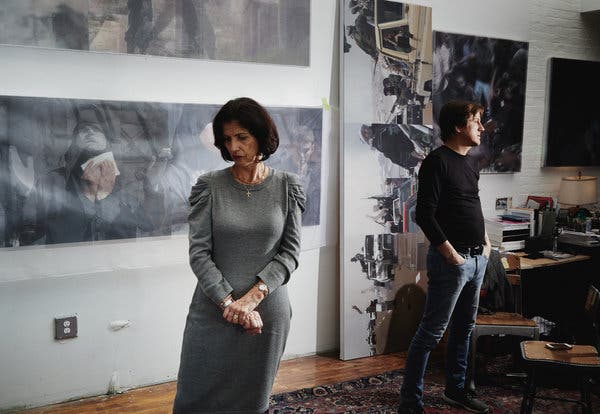 Break out the violins and pass the tissues. From the article:
“Mrs. Foley has a desperately keen understanding of what happens in a conflict zone. “Jim” was her son, the freelance photojournalist James W. Foley. He was kidnapped in 2012 while covering the Syrian civil war, held hostage for 21 months and brutally murdered in 2014 by members of the Islamic State in an execution filmed by his captors and released online.”
Approaching the one-year anniversary of having lost a pair of loved ones myself (Pops & Sugar), you might expect the remainingmember of “The Editorial Board” to be showing a bit more empathy for “Diane Foley” — the eternally grieving mother of the “beheaded” photo-journalist, “James Foley.” Well, weep not for “Mrs. Foley,” boys and girls, because she, and her “beheaded” son, and her “husband,” and her other “children” are all dirty, stinking, deceitful, treasonous, low-life CIA Deep State crisis actors. And just like so many of the crisis actors associated with so many fake shootings and so many fake bombings of the past 8 years or so, fake-ass “Mrs. Foley” — of the fake-ass “James Foley Legacy Foundation” (cha ching!) — is, as this article confirms, still collecting shekels for her bad acting.
Let’s tear the Marxist mask off this brazen sorceress who is now partnering up with an artist to adapt Jim Foley’s photos for a for-profit museum exhibit.

1. The comically fake You Tube “beheading” of Jim Foley and others (produced by CIA & Mossad Studios) succeeded in providing the phony pretext needed for Obongo and friends to deploy troops to Syria. The real target was Assad, not “ISIS.”

2 & 3. “Mr. & Mrs. Foley” act out their “grief” over the news of Jim’s “beheading.” (Nice Hollywood touch with the “come home Jim” yellow ribbon on the door) — Dear Lord! These people really need to take some acting lessons!

And if you thought “mom and dad” were bad, you should have seen the brother and sister fake-cry, smirk, smile, stutter and laugh their way through a TV interview with Katie Couric! (Here) … The Jewish-looking girl playing the part of “Katie Foley” also starred as “Alex Israel” in the Sandy Hook School Shooting Hoax.

Incredibly, this was the very same “James Foley” who had been kidnapped in Libya three years prior to his kidnapping in Syria! That event sparked the short-lived “Free Foley” marketing campaign. Evidently, with the fall and subsequent street-murder of Libyan leader Qaddafi, that tear-jerking scam from 2011 was no longer needed and Foley was soon “freed” by his scriptwriters, er, captors (rolling eyes) after 44 days.
Not wanting a good story to go to waste, CIA-Mossad productions did a “spin-off” on 2014 — “Free Foley II.”

1. Why were the “Foleys” so happy while their son was still in the custody of terrorists back in 2011? That earlier edition of the “Free Foley” show was cancelled when it was no longer needed. Notice that corny yellow ribbon again.
2. Jim comes home from Libya to his momma safe and sound — only to be “kidnapped” again, in Syria, in 2014.

It is amazing, isn’t it? Almost surreal. Only we the “woke” will ever know how these goofy, amateurish, laughing-our-butts-off black pajama & orange jumpsuit stunts, by succeeding in causing the deployment of U.S. troops to Syria, within close proximity of Iranian and Russian forces, very nearly got us to World War 3. All that was needed after the “beheading” hoaxes, tear-jerking Syrian migrant videos and subsequent troop deployment was for the expected president, Killary Rotten Clinscum, to start the fight in 2017 — and believe you me, that vicious she-devil from the pit of hell damn sure would have!
As it stands now, with Trump pulling the troops out of Syria as Turkey, Russia, and Iran (much to the increasingly irrelevant Bibi Satanyahoo’s dismay) assume protective control of the region, the multiple media-hyped beheading hoaxes have all come to naught. Oh how (((they))) must hate Trump for this!

1. As far back as 2013, Trump (and many in the military) warning against Obongo’s intervention in Syria. As President, his phony missile attacks of 2017 and his insults of “Assad the Animal” were all just part of a strategic show designed to conceal his ultimate plan of pulling us out and leaving Syria to Russian, Turkish and Iranian protection.
3. As it was with the tragedy of Libya, former Secretary of State Killary was one of the architects of the horrible proxy war against Syria. — We see that you had some cheek work done recently, eh Killary? But aren’t Brazilian butt-lifts supposed to be done on, well, the butt? Just sayin’.

Boobus Americanus 1: I read in the New York Times today about a new art exhibit based on the works of James Foley — that photographer who was beheaded by ISIS a few years ago.

Boobus Americanus 2: I remember watching that horrible event. The evil ISIS bastards had put it up on YouTube.

Editor:  Actually, Boobus, the “beheading” video only showed Pajama Man putting a knife to Foley’s throat — nothing more. The Times of London (see above headline) even went off script (for a day) and ran a story about the Foley fakery.
Editor: Baby girl St. Sugar is taking a break from geo-politics today to spend a little time relaxing with all the wonderful people and creatures in heavan.
(The writing desk still seems so empty without her.)