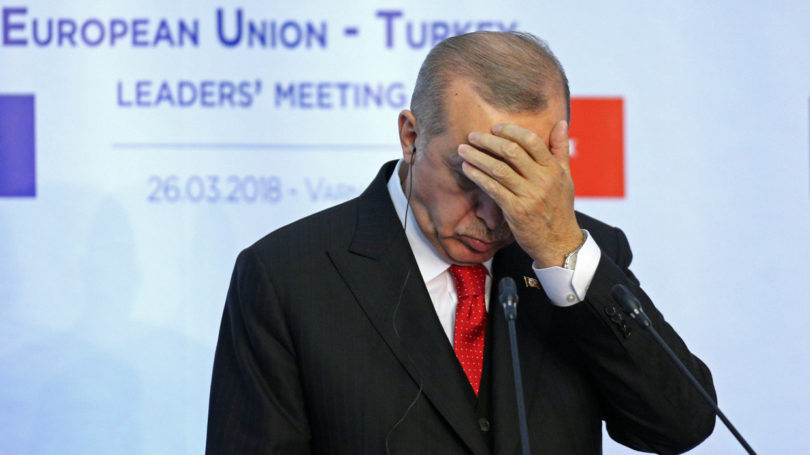 Turkish President Recep Tayyip Erdogan has thrown yet another jab at the European Union, saying that the bloc is experiencing a shortage of political role models, something which he described as a “leadership void.”

Top European politicians are apparently not respected that much by Erdogan; he struggled to name at least one single leader whom he deems to be an “example” for others to follow.

“Europe is experiencing a serious leadership crisis, there’s leadership void. I can’t find the courage to say [about anyone]: ‘This leader is an example for Europe,'” Erdogan said on Tuesday.

While Erdogan’s evaluation is not very complimentary for the present-day European politicians, at least some of the past EU leaders earned his praise.

Erdogan named the former German chancellor Gerhard Schroder as an important leader who was able to make reforms. Another politician to the Turkish president’s liking was former Italian PM Silvio Berlusconi, under whom Italian-Turkish cooperation thrived.

When asked which of the contemporary world leaders he actually likes, Erdogan listed both the US and Russian presidents, stating that both Donald Trump and Vladimir Putin are “open” during talks and they do not have any “secret agenda” against Turkey.

Ankara has been repeatedly engaging in bitter rows with the EU over various issues, including the refugee problem, alleged violations of human rights in Turkey, Erdogan’s recent assault on Kurdish-led militias in northern Syria, and so on. While these issues have repeatedly caused diplomatic flare-ups between the bloc and Turkey, Erdogan was not afraid to spice it up and get personal with the EU leaders.

One of the latest spats erupted between the Turkish leader and his French counterpart, triggered by Emmanuel Macron’s fiery remarks on NATO’s “brain death.” While many NATO leaders tried to prove the bloc was still alive, Erdogan bluntly said Macron, should have his “own brain death checked” first before delving into the gray matter of the alliance.