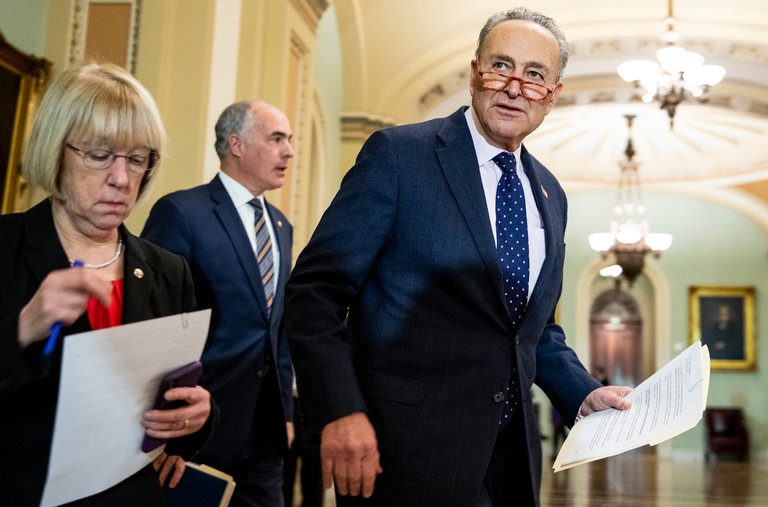 The Editorial Board of The Anti-New York Times had been of the opinion that this whole impeachment charade was just an empty threat on the part of the Demonrats — political theater to tarnish Trump. But now, it actually appears as though the suicidal House D’s, contrary to the country’s position on the matter, are going to go through with this farcical folly of impeachment — to be followed by a trial in the Senate. From the opening line:

“As the House prepared to make President Trump only the third president in American history to be impeached, the Senate’s top Democrat on Sunday laid out a detailed proposal for a Senate trial “in which all of the facts can be considered fully and fairly.”

What is going on here? Don’t the Demonrats see that this is a trap, baited by “The Maestro” Trump himself? Do they actually believe that 20 out of 53 Republican Senators can be flipped into voting to convict and remove a president whose party faithful approve of him by a margin of 95%? Do they not understand that a Senate trial would be governed by Lindsey Graham (R-SC) — an ex-anti-Trumper who — in the wake of the probable execution of his former butt-buddy, John McStain, by the military — has since been housebroken into Trump’s most obedient attack dog in the U.S. Senate? Are they not aware of the basic rules of jurisprudence, which will allow Trump’s counter-attacking lawyers and Senate Republicans to subpoena and document any witness or document they choose to? Do the Demonrats really want to see Hunter Biden — the crack-head thieving son of Creepy Pedo Joe Biden — roasted alive in the hot-seat over his shady dealings in Ukraine? Do the D’s not see how Trump is smashing all fund-raising records as a direct result of this impeachment push? Have the once shrewd and cunning Demonrats lost their collective minds?

1. “Nervous Nancy” Pelosi — herself as corrupt as they come — has changed her mind and now wants to impeach.

2. Lindsey Graham is now owned by Trump. As chair of the Senate Judiciary Committee, he is going to crush Trump’s enemies in the upcoming trial (assuming the House does impeach as expected)

3. Trump taunting tweet to Demonrats: “If you are going to impeach me, do it now, fast.”

This rush to impeach and have a Senate trial destined to “boomerang” back on the D’s is especially baffling because Demon House Speaker Nancy Pelosi had initially, and strongly, resisted the loud impeachment pressure coming from the loony ladies (or Trump plants?) of “The Squad.” But now, she’s on board 100%, in spite of the fact that her own son has been linked to shady dealings in Ukraine. What does this all mean? Two hypotheses here:

Hypothesis A: The investigative nooses of Messrs Horowitz, Huber, Durham & Barr are tightening so fast around the Demonrats that they have no choice but to, in American football parlance, throw up a last-second “Hail Mary” pass in the hopes that it will work, against all odds.
Hypothesis B: In addition to a number of Demonrats that may actually be working for Trump, there may be a bunch who have been brought under control by having received “an offer they can’t refuse.” Under this scenario, Trump himself would be the one maneuvering the impeachment drive. This would also explain why, after the big Demonrat election victories in 2018, Q Anon and Trump (one in the same) almost seemed pleased the Demonrats did so well in the House (driving out a bunch of criminal anti-TrumpRepublicant’s) — while the Repub’s (now mostly pro-Trump) gained a 53-47 majority in the Senate. A Dem House impeaches… and a GOP Senate unleashes hell on the Demonrats. Perfect!
Or, most likely, a combination of both options.

1. Contrary to the spin of the Fake News, the “Horowitz Report” was actually very damning.
2. Attorney General Bill Barr has all but said that arrests are coming soon.
3. Prosecutor John Durham has assembled Grand Juries — which can crank out large numbers of indictments in secret.
Get your popcorn ready, boys and girls, because some serious fireworks are coming. Don’t be surprised if, within the coming year, we see some big names — like Brennan, Killary, Biden, Kerry, Obongo et al — rounded up, indicted and forced to do the perp walk. As Trump wrote in one of his own books: “I always get even!” And don’t think for one minute that he has forgotten the public humiliation he was forced to endure at the 2011 White House Correspondence Dinner when Obongo mocked Trump up and down as the then private citizen Trump just sat there steaming quietly as all of official Washington laughed at him. (video here)

As a video clip posted by Q Anon a few weeks foretold about the coming events: “It’s going to be biblical.” And we do believe that it will rock this nation. However, as we have said many times before and will reiterate once more — if these opening salvos on crimes related to Ukraine corruption and fraudulent FISA warrants, as serious as those crimes may be, do not ultimately lead to bigger fish such as 9/11 truth, fake shootings, the Scalia assassination, voter fraud, Satanic child sex trafficking, rape & sacrifice, the arrest of George Soros etc, then it’s all just fun and games in the big scheme of things. Now Q Anon has said that the relatively smaller crimes will serve the purpose of psychologically preparing the public for disclosure of the really demonic stuff. That’s gives us a bit of hope. But until the goods are delivered as promised, we withhold final judgement on Trump / Q Anon. But so far, so good.
Stay tuned.

Q Anon (Trump Team) has promised us that things like 9/11, massive organized voter fraud and Satanism among the elites will all be brought to light. Let’s wait and see where the coming “Storm” takes us.

Order copies of the Q-Anon 120 Year Timeline and pass them out to friends / family. (HERE)
*
Q Post: 20 Jun 2018
They want you DIVIDED!
They call us names.
They make threats.
They censor.
They lie.
They project.
They cheat.
They steal.
They harm.
They are sick.
They are evil.
At some point the streets (for them) will not be safe.
Q