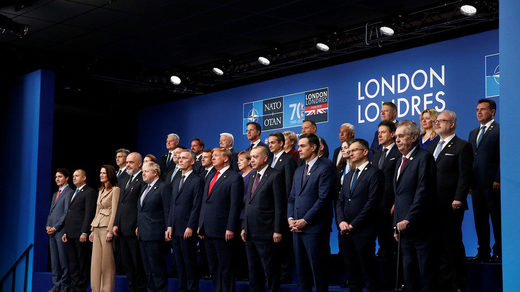 Officially, the NATO summit in London was a huge success and alliance is strong and united. Yet even the mainstream media aren’t buying this any more, seizing on high-school-style gossip to mock the alliance leaders.

US President Donald Trump is playing the summit off as “great progress,” singling out the promised increases in military spending. “Thank you NATO,” he declared in a slick video tweet produced by the White House on Wednesday.

Meanwhile, both Trump’s domestic critics and the hostile mainstream press were busy hyping the president’s early departure as a sign he is mentally unstable, a thin-skinned “snowflake,” and “privately viewed with a mixture of mirth and alarm” (The Guardian).

Trump justified skipping the final press conference by saying “we did so many over the past two days,” which is true enough. It was inevitable, however, that it would be interpreted in the context of snide remarks by Canadian Prime Minister Justin Trudeau at a Buckingham Palace reception on Tuesday.

Trump responded by calling Trudeau “two-faced” and the Canadian leader offered a slippery apology. The same press that called Trump a “puppet” or “pawn” of Russia when he dared suggest the alliance was obsolete or useless, now amplified the high-school atmosphere of the NATO summit.

It’s quite surprising, actually, that no one has described the viral Trudeau video as part of a “Russian disinformation op” to “sow discord” among the allies.

Lost in all the drama is the fact that no one at the London summit has managed to articulate the purpose of NATO, 70 years after it was founded to keep “the Russians out, the Americans in, and the Germans down,” in the words of the alliance’s first secretary-general. There was no soul-searching at the summit, only bravado about the alliance’s strength, unity and inevitable expansion to Africa and China – purely in “self-defense,” of course, against those pesky foreigners who dared to resist being dominated by “democracy.”

It fell upon the hapless French President Emmanuel Macron to bring up the dysfunctional character of NATO and point the fingers at Turkey and the US as the culprits. All that did was get him a scolding by Germany’s Angela Merkel and even from Trump, with zero allies coming to his defense. Some solidarity!

The uncomfortable truth about NATO is that it has had no legitimate purpose since the Cold War ended in 1989. The alliance has been seeking for a raison d’etre ever since, trying to replace the UN in the Balkans, bringing “democracy” to Libya, or feeding blood and treasure into a bottomless pit of despair that is Afghanistan. Its leaders don’t even believe their own hype about a threat from Russia, and are now trying to present China as the next phantom menace.

Those leaders, by the way, face a rising crisis of legitimacy at home. Democrats are trying to impeach Trump on trumped-up charges. Macron seems to harbor delusions of Napoleonic grandeur on the world scale even as he looks more like Louis XVI facing the echoes of 1789 in the ‘Yellow Vests’ revolt. Merkel’s party may not survive her retirement, as Germans push back on her disastrous policies. In the UK, Brexit has touched off a dirty war of media smear merchants easily rivaling that going on in the US.

Far from some sort of benevolent global hegemony NATO’s ideologues envisioned in the 1990s, the alliance is an empire in chaos. Against that backdrop, it doesn’t really matter whether its military budget goes up by $130 billion or $400 billion, when NATO’s actual usefulness to any of its members is less than zero.