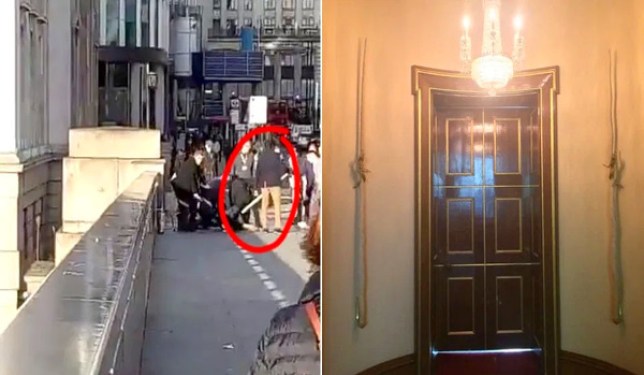 The London Bridge incident is yet another staged show like many other events. This is an era of stage-managed theatrical deceptions designed for trauma-induced mind control.

I for one appreciate the English sense of humor and comedic special effects and imagine, in the planning stages, it went a little something like this:

Stage Manager No. 1: What can we do that’s memorable enough to get the public interested?

Stage Manager No. 2: How about a fight with a narwhal tusk?

He was run out of the event by attendees grabbing makeshift weapons to confront the killer, who had already inflicted fatal injuries on two people and wounded several more. One man picked up a fire extinguisher, another pulled the unicorn-like tusk of a narwhal off the wall and gave chase.

In the headline photo note location of narwhal tusks on the wall in the Fishmonger hall. Someone (like children?) can just grab these and run off? They aren’t screwed down?

Here is the brief scene.

The man with the antique whale cudgel was identified by The Times as a Polish chef called Luckasz, who suffered lacerations during the attack.

“Being stabbed didn’t stop him giving him a beating,” a colleague who did not want to be named told the paper. Some of the others who turned on the killer reportedly were ex-cons attending the event.

The terrorist is shot while prone on the ground. Per usual, whoever took this video veered the camera away from the action during the shooting. This effect is a trademark of staged deceptions. By the way, handguns are not legal in the U.K. and are a rarity — even among police.

Finally this glitch-in-the-Matrix video has surfaced and shows the terrorist getting up after being shot at point-blank range.

Incidentally here is the rationale for censoring this glitch video at You Tube.

Sometime and somewhere during the event, two people were killed, or so the story goes.

This next video is illustrative, as it shows how people can be stampeded away to close off the scene — an important consideration for stagecraft. Few, if any, of these people are actors, but their reaction is controlled for effect.

The most logical objective of this event is to keep terrorists and boogeymen locked up in prison.

British Prime Minister Boris Johnson said Saturday that prisoners convicted of terrorism offenses should not have access to early release.

“I think that the practice of automatic early release where you cut a sentence in half and let really serious, violent offenders out early simply isn’t working, and you’ve some very good evidence of how that isn’t working, I am afraid, with this case,” Johnson said.

Of course, there’s also an election coming up, and leaders need to be tough on these issues to manipulate the public.

These poorly Photoshopped and altered photos of the perp Usman Khan (US Man Con?) are really all you need to know about this deception. The alterations are easy to discern with the naked eye. Source: Fotoforensics

From the Fotoforensics tutorial: Look around the picture and identify the different high-contrast edges, low-contrast edges, surfaces and textures. Compare those areas with the ELA results. If there are significant differences, then it identifies suspicious areas that may have been digitally altered.