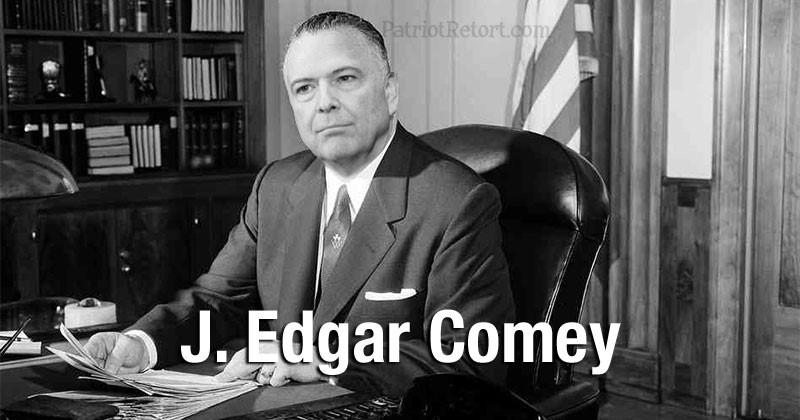 Comey: ‘I Was Wrong’ — FBI’s FISA Abuse ‘Was Not Acceptable’

Sorry, Jim, we don’t buy your pathetic explanations for committing crimes against the American people. Seditious Conspiracy and Treason is what you and your Senior Executive Services partners in crime did….and you all got caught.

We the People Make Official Charges of 28 Counts of Treason

When you say the Mueller Investigation, please remember it is actually the Comey Investigation to Impeach as it was called by Peter Strzok and Lisa Page, two of the key FBI members of a team that Comey led through Bill Priestap’s counterintelligence department which is protected by a “National Security” blanket that allows them to conduct top secret “operations.”

From July, 2016, on to this day, Trump has been under attack from the small group, the Trump operation, the secret society, the investigation to impeach, the Carter Page Dossier group, the George Papadopoulos FBI Counterintelligence operation, as it was called by Peter and Lisa in the 372 of the 50,000 text messages released so far.

Peter and Lisa went on to lead the Mueller Investigation which was also aided and supported by other members of the Investigation to Impeach, which essentially became a group we call The Leaders of the Coup d’etat, or the Treasonous Traitors. Any name you give this group, it is still a Witchhunt that has turned into a George Soros style Regime Change.

James Comey Exposed: Chief Election Meddler and Instigator for the Overthrow of Trump

What is little known and never spoken about in the corporate media is that James Comey led the Democratic opposition attacks against Donald Trump to assure that Hillary Clinton, who is Comey’s boss, would become president. Comey went from making tens of millions a year as a crooked lawyer and banker to a government job that he was not qualified to fill – unless you consider his value as a DC Fixer. But Comey has always been sloppy and sentimental in his approach and he lets his emotions get the better of his judgment. Comey is simply a weak-willed, lazy lawyer who thinks that people don’t know when he is lying.

Detailing the Commission of Comey Crimes

James Comey is the ultimate D.C. “crime fixer.” His many years of D.C. cronyism is profoundly smeared with a litany of outright crimes for which he should be prosecuted and receive the most severe sentence for one who is supposed to be protecting U.S. laws instead of violating them contemptuously. But when you are the top-cop in America, you get a stack of “get out of jail free” cards—some for you and many for your criminal friends.

A review of FBI Director James Comey’s professional history and relationships shows that he is deeply entrenched in the big-money cronyism culture of Washington, D.C. His personal and professional relationships have all been undisclosed as he pretended to prosecute Hillary Clinton and yet exonerated her before an investigation was even opened. This legal dodging has been Comey’s M. O. for decades as he was placed in high level political positions to “FIX” the charges brought against White House criminals.

Have you wondered why James Comey can’t get his story straight about the Trump dossier which he presented as a one page “executive summary” to Trump as an “intelligence report?”  Seriously.  The FBI produced a one page intelligence report based on a fraudulent dossier to the President of the United States.  Mr. President, you might start reading the American Intelligence Media intelligence reports to get better intel than what you are currently being given by the 17 Deep State spying and lying agencies.

Comey gave a one page summary from a 35 page dossier filled with allegations against Trump. Could it be that he was too embarrassed by the childishly fake intelligence report to let Trump see the whole thing?  Yet later, Comey uses the Trump dossier as his excuse to making allegations about Trump/Russia ties. Why was this ridiculously fake October Surprise not openly and immediately denounced?