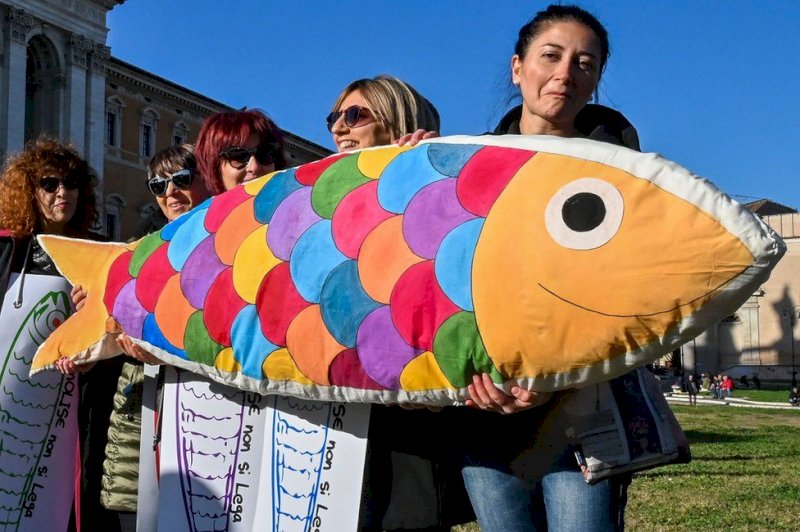 The seditious directors, producers and scriptwriters based at Hollywood-Langley studios, with local affiliates in all countries, have recently rolled out a new production in Italy — the “Sardines Revolution” (™ pending). The “grassroots” (ha ha ha ha) anti-nationalist / anti-populist movement among the Globo-commies and their migrant-loving, EU-worshipping libtarded dupes takes its name from their supposed ability to pack the public squares (piazzas) of Italy with “spontaneous” ™ mobs of protesters — like crowded or canned “sardines.-   Get it? (rolling eyes).
From the article:
“A grass-roots movement protesting the populism of the far-right Italian leader Matteo Salvini demonstrated its surging strength on Saturday, drawing tens of thousands of people to a vast square in Rome in its first national rally.

The Sardines movement, named for its ability to pack piazzas, reflects a general disgust among many liberal Italians over Mr. Salvini’s anti-migrant and anti-European language.”

The “Sardines Movement”…. Mamma Mia! Who writes these corny and increasingly ineffective scripts?

Libtards are so mature, aren’t they?

The “Sardines Movement” offers us a good “teachable moment” to review how the Left has, since the days of the Felonious French Revolution, engineered these types of “grassroots” movements to overthrow targeted regimes. Once you know the “recipe,” the stage-managed scams become very easy to recognize. We are re-publishing below a very popular TB piece which ran almost three years ago — one which is definitely worth re-reading every now and again.

NEW WORLD ORDER RECIPES PRESENTS:
HOW TO COOK UP A FAKE “PEOPLE’s UPRISING!”

Are you having a problem with pesky nations that refuse to comply with the Globalist or Zionist program?Worried about the cost and unintended consequences of another Neo-Con war? Well, before you do anything rash, try overthrowing the target government with a “Soft Power” revolution instead. See recipe below.

Soros and CIA drug money is limitless! Pass it around!
STEP 2
.
Use the humanitarian guise of “pro democracy” or “human rights” to start up your NGO’s (Non Governmental Organizations) inside of the target nation. Provide cover for yourself by doing actual good works, while building up your NGO with local malcontents, libtards, and gullible idealists.

Promote “democracy.”
STEP 3.
Recruit your network of domestic traitors. Target intellectuals, academics, politicians, journalists, and, if possible, military men. Use bribery to target those who can be bought. Use blackmail to target those who have some stain in their private life.

…use Blackmail.
STEP 4
.
If the target nation has large Labor Unions, corrupt labor bosses will be very happy to cooperate with you. Yankee dollars are king!

(Now you are ready to get cooking!)

At Killary’s concession speech in 2016, the purple-clad Clintons signalled the beginning of an attempted “Purple Revolution” to overthrow Donald Trump — a color coup which has since backfired.

STEP 6
.
Kick off your “revolution” with a “spontaneous protest.” Use your CIA agents and their controlled NGO idiots to make allegations of “human rights abuses, or “government corruption,” or “election fraud.- It doesn’t matter if the allegations are true or not. Just be passionate!

Roll out your “spontaneous” banners and protest signs, written in English. You are, after all, trying to manipulate American policy makers and the gullible American public.

STEP 8
.
Add in your wholly-owned labor bosses, academics, and spoiled “Western wannabee” college brats. Turn up the heat on the target government. This will swell the ranks of the protesters to include malcontents, people with legitimate grievances, “bandwagon” types, and folks who are just plain bored and want something to do
STEP 9
.
The major American and European media outlets will now assist you by portraying the uprising as a “popular” and “spontaneous” reaction to corruption / tyranny / voter fraud etc. Tell your agents not to laugh as the cameras are filming them.

STEP 10
.
Now that “the world is watching”, stage an incident. If you can manipulate some fanatic into setting himself on fire, do so! Otherwise, fake an atrocity, Use fake blood, fake tear gas, and photo shopped images. Make sure the “victim” is a woman! The international media and your paid local propagandists will run with the atrocity story. The destabilizedtarget government will soon lose support among many of its own people!
STEP 11
..
Add in your violent agent provocateurs. Use them to FORCE the police into violent acts. This will embarrass, intimidate, and destabilize the government to the point where it becomes de-legitimized in the eyes of “the world community.”

STEP 12
.
Add in your traitor politicians and wait for the US, UN, & EU to “pressure” the “oppressive” target government into submission. The threat of economic sanctions, “no-fly zones,” bombing, or even an armed “rebel” uprising, should convince the government to either bend to your wishes, or to step down and call for new elections.

If “Color Revolution / Spring” should fail, then prepare for military action — to “make the world safe for democracy!”