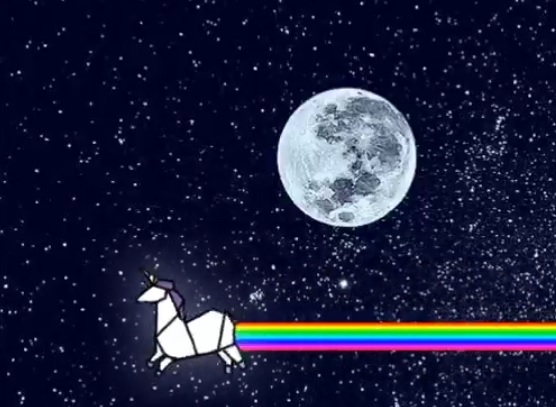 Ten days past since I wrote about the Unicorn liberated, and the Red Dragon’s people did what they have been doing for centuries – faking the reality.

The stage was set on a bridge from London’s kingdom to a neighboring kingdom – the City of London. On this bridge the Matrix placed the Red Dragon Empire’s mercenary serving as the “Muslim extremist.”

Everyone and their cat knows that the ‘jihadis’ are not some inexplicable force of nature but servicemen of a private army. Contrary to popular believe, mercenaries of the Empire are above the law and never get punished for their climes even if convicted, and roam the streets of the R.D.E. free, public outcry be damned.

We have watched this spectacle many times before.

The Matrix is falling apart, dissembled by the forces it cannot withstand, its parts dissociating from each other, its covers flailing like toilet paper on trees the day after Halloween.

The Matrix has lost its ability to come up with new scenarios, and is grinding down its captive audience’s trust by recycling old scenarios we have memorized by heart, by now.

The Matrix is reeling violently after the Unicorn escaped his five centuries in captivity. The families running the empire for the Red Dragon. those monstrous creatures who drowned THIS world in human blood, could think of nothing but staging an appearance of a fake unicorn, the INSTEAD_OF_unicorn, trying to imitate empire building powers of the real Unicorn.

Another Matrix actor, despite of the security of the City of London, walked into a museum and took of the museum wall (!) a narwhal tooth displayed there, and was allowed by the security to walk outside of this museum (!) to walk on the bridge, filmed from many points while doing so, to pretend fencing with the knife armed actor.

“But why stop there?” the Matrix pushed even harder against its subjects sanity.

“He is a murderer out on day release, which us as a family didn’t know anything about. He murdered a disabled girl. He is not a hero, absolutely not.”

But the aunt is wrong, isn’t she? Child rapists and murderers ARE the heroes of the Red Dragon Empire.

Their jewelers faked the empire building power for their rulers’ sceptres and swords with the narwhal tooth embedded in their handles to deceive their subjects about having the power of Unicorn which they never had. For example, the Imperial Treasury of Kaiserliche Schatzkammer of the Habsburgs.

As I wrote in the Unicorn Liberated, the Red Dragon’s subjects gained Russian tsar’s trust by pretending to be knowledgeable doctors. They poison Ivan IV and stole Russian state sceptre with the real Unicorn horn in it. The Red Dragon by its dark magic kept the Unicorn captive and chained for 5 centuries creating with his powers their own empire, the bloodiest of them all.

To prevent Russians from getting their Unicorn back, entire fake history was created smearing the great tsar’s name. The fake Romanovs did this, and the Talmudic Bosheviks did this, and the pro-West Ukrainian nationalists Khrushchev and Brezhnev, and the Liberal Looters in the 90s did this, — all while the R.D.E. attacks on the Christian Empire were coming non-stop. The R.D.E. likes to separate its wars and claim they were completely different wars, but we Russians know that it was One Thousand Year War against us.

A powerful mystery of being grateful

Russians have remained grateful to the great tsar Ivan IV and erected monuments to him and held him in their thankful prayers for their great country that he had created. Their gratefulness manifested the tsar into this world, and liberated the Christian Empire’s Unicorn from Red Dragon captivity.

All the Matrix can do now is a bizarre spectacle of the INSTEAD_OF_UNICORN with the narwhal tooth!!

There are some Children of God living on the British island. What are you waiting for? Join the Orthodox Christian Church, be NOT of THIS world, not of the MATRIX world.

The Pope urged people to” resist the blinding lights of consumerism.”