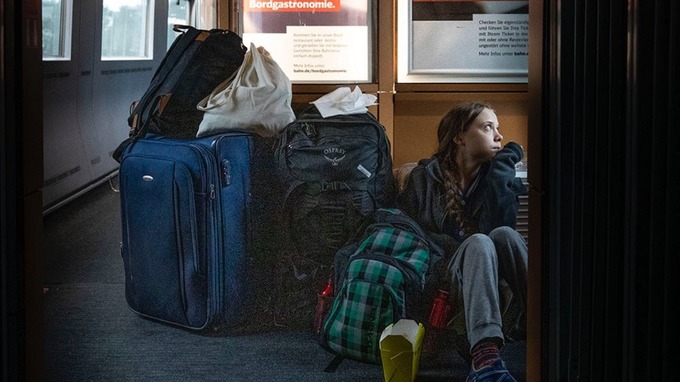 After spending much of the past year crisscrossing the globe in the luxury of a state of the art racing yacht while skipping school, spreading the gospel of the climate virtuous, shaming adults who aren’t doing enough to halt global warming by threatening to “put them against the wall”, and boosting the popularity of her fame-starved opera singing mother while doing the bidding of her eco-friendly QE starved enablers, Greta Thunberg can’t even get a decent ride home.

At least, that’s the narrative Greta wanted the world to believe when the “activist” Tweeted out on Saturday that, on her way home from the UN Climate conference, she was confined to traveling on an overcrowded train through Germany.

How dare the Germans subject Greta to such conditions: to memorialize her predicament, she tweeted a photo of herself, sitting on the floor, looking forlorn and sad like the young, innocent calf inside the crowded cattle car, headed for slaughter. Because, the fight against the evils of climate change knows no bounds. The struggle is real.

Traveling on overcrowded trains through Germany. And I’m finally on my way home! pic.twitter.com/ssfLCPsR8o

Except when it isn’t.

Spoiling the latest installment in Greta’s carefully crafted “martyr” narrative, Deutsche Bahn – Germany’s state railway company – chimed in and reminded Thunberg and her millions of followers, that she actually had a seat in First Class.

The company Tweeted: “Dear #Greta, thank you for supporting our railway in the fight against climate change! We are happy that you travelled with us in the ICE 174. And that with 100 percent eco electricity. It would have been even better if you had also mentioned how friendly and competent the team looked after you in your seat in First Class.”

Ouch… German Rail responding to Greta tweet: "Thank you for travelling with Deutsche Bahn… It would have been nice had you acknowledged how well and competently our team treated you in your First Class seat." … 🍿🍿🍿 pic.twitter.com/hVInNJAZ5H

Like a deer in headlights, Greta was immediately forced to clarify that the world wasn’t quite as evil and hostile as she had represented it, admitting she had only been on the floor for part of her journey, “and that overcrowded trains were in fact a great sign because that means that the demand for train travel is high!”

Our train from Basel was taken out of traffic. So we sat on the floor on 2 different trains. After Göttingen I got a seat.This is no problem of course and I never said it was. Overcrowded trains is a great sign because it means the demand for train travel is high!

The bizarre standoff caused a Twitterstorm, with Greta’s supporters wishing her safe travels and lashing out at DB, while her critics jeered.

who calls himself a climate activist has to live with it like everyone else. There is no bonus for a Greta Thunberg. In addition, she has too much luggage for a climate protector as well as fast food

The railway company stated that Greta traveled in first class. Stop pretending to be a poor, humble laborer, you are just a bored (very smart tbh) MILLIONAIRE. https://t.co/r2KeXAgwFT