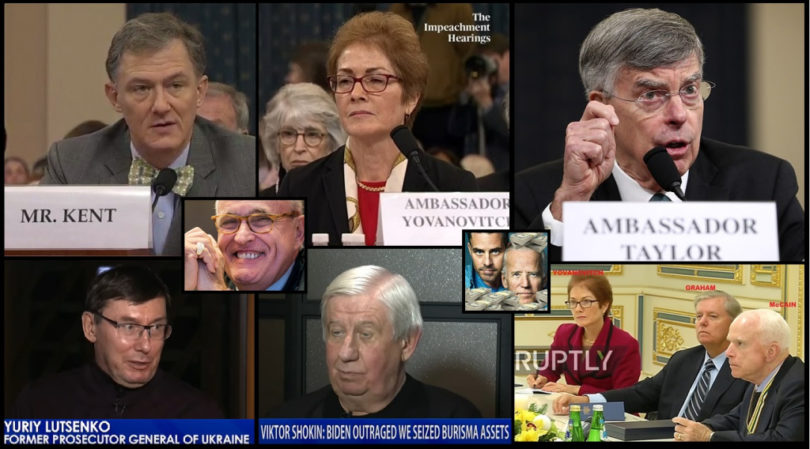 In this interview former Prosecutor General Viktor Shokin spoke to OAN about Joe Biden’s direct role in getting his office to stop investigating his son Hunter. The problem for Joe Biden was when Shokin seized all of Burisma’s assets the Ukranian gas company could no longer pay his son Hunter Biden. So the vice president demanded Shokin be removed.

When you combine this interview with the damning public statements delivered by the Ukraine prosecutor that replaced Shokin, Yuriy Lutsenko, things really get troublesome for Joe Biden, the Obama administration and Adam Schiff.

Prosecutor Yuriy Lutsenko stated that after he replaced Shokin he was visited by U.S. State Dept. official George Kent and Ambassador Marie Yovanovitch; they provided a list of corruption cases the Ukraine government was not permitted to follow.

Prosecutor Lutsenko dropping specific corruption cases was critical because that allowed/enabled a process of laundering money back to U.S. officials.  [SEE HERE]

The potential for this background story to become part of a larger impeachment discovery is what has the U.S. media going bananas against Rudy Giuliani.

Senator Lindsey Graham is directly connected to the group of U.S. politicians who were participating in the influence network within Ukraine.  One of the downstream consequences of Rudy Giuliani investigating the Ukraine corruption and money laundering operation to U.S. officials is that it ends up catching Senator Graham.

Hence, earlier today Senator Graham said he would not permit Senate impeachment testimony that touched on this corrupt Ukraine aspect.

In essence Senator Graham is fearful that too much inquiry into what took place with Ukraine from 2014 through 2016 will expose his own participation and effort along with former Ambassador Marie Yovanovich.

Graham is attempting to end the impeachment effort quickly because the underlying discoveries have the potential to expose the network of congressional influence agents, John McCain and Graham himself included, during any witness testimony.

Senators from both parties participated in the influence process, and part of their influence priority was exploiting the financial opportunities within Ukraine while simultaneously protecting fellow participant Joe Biden and his family.

If anyone gets too close to revealing the process, writ large, they become a target of the entire apparatus.  President Trump was considered an existential threat to this entire process.  Hence our current political status with the ongoing coup. The Giuliani letter:

It will be interesting to see how this plays out, because in reality many U.S. Senators (both parties) are participating in the process for receiving taxpayer money and contributions from foreign governments.

Those same senators are jurists on a pending impeachment trial of President Trump who is attempting to stop the corrupt financial processes they have been benefiting from.

The conflicts are very swampy….