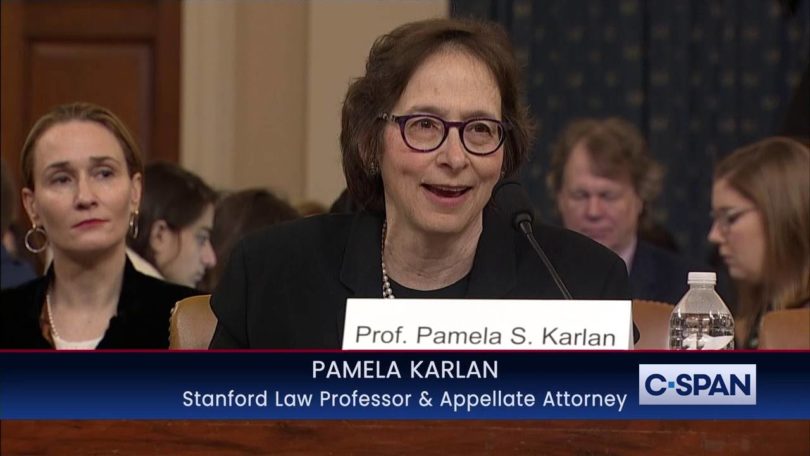 No apology from an angry partisan would be complete, however, without a new attack in the same breath…

“I want to apologize for what I said earlier about the president’s son. It was wrong of me to do that. I wish the president would apologize, obviously, for the things that he’s done that’s wrong, but I do regret having said that,” she said.

Pamela Karlan: "I want to apologize for what I said earlier about the president's son. It was wrong of me to do that. I wish the president would apologize, obviously, for the things that he's done that's wrong, but I do regret having said that." pic.twitter.com/7lYiRWCKjw

What we got today: 3 witnesses, with long records of liberal bias, one of whom made a joke about a 13 year old kid and disparaged conservatives living in rural areas.

And then one witness, who opposes Trump, still saying the record does not support impeachment.

One would think that House Democrats looking to impeach President Trump would attempt to strengthen their case by inviting moderate constitutional experts to offer measured, yet cogent arguments on why Trump’s interactions with Ukraine are in fact impeachable.

Instead, they peddled three hyper-partisan scholars in front of the House Judiciary Committee who had an obvious emotional investment in impeaching Trump, over claims that he abused his office by asking Ukraine to investigate credible allegations of corruption by former Vice President Joe Biden and his son Hunter.

The lone moderate was George Washington University professor Jonathan Turley, who told House Democrats that by attempting such an ill-founded impeachment they are the ones abusing their power.

➡️ RATCLIFFE: So if I were to summarize your testimony – no bribery, no extortion, no obstruction of justice, no abuse of power. Is that fair?

➡️ TURLEY: Not on this record.

Case closed. Time to shut down this partisan sham. pic.twitter.com/GAFNQEpGdQ

In response to Karlan’s comments, Rep. Matt Gaetz (R-CA) slammed Karlan, first asking her about contributions to Hillary Clinton – before calling her out for obvious contempt towards conservatives – including Barron Trump. Gaetz suggested she may not recognize how insulting she’s being “from the ivory towers of your law school,” adding “when you invoke the president’s son’s name here. When you try to make a little joke out of referencing Barron Trump, that does not lend credibility to your argument. It makes you look mean. It makes you look like you’re attacking someone’s family … the minor child of the President of the United States.”

Gaetz ends by suggesting that if “wiretapping a political opponent is an impeachable offense, I look forward to reading that Inspector General’s report because maybe it’s a different president we should be impeaching.

The White House issued a statement in response to Karlan, saying “Only in the minds of crazed liberals is it funny to drag a 13-year-old child into the impeachment nonsense. Pamela Karlan thought she was being clever and going for laughs, but she instead reinforced for all Americans that Democrats have no boundaries when it comes to their hatred for everything related to President Trump.

Hunter Biden is supposedly off-limits according to liberals, but a 13-year-old boy is fair game. Disgusting.

"Every Democrat in Congress should immediately repudiate Pamela Karlan and call on her to personally apologize to President @realDonaldTrump and the First Lady for mocking their son on national TV.” – @kayleighmcenany

First Lady Melania Trump also slammed Karlan, tweeting “A minor child deserves privacy and should be kept out of politics.

Pamela Karlan, you should be ashamed of your very angry and obviously biased public pandering, and using a child to do it.”

A minor child deserves privacy and should be kept out of politics. Pamela Karlan, you should be ashamed of your very angry and obviously biased public pandering, and using a child to do it.