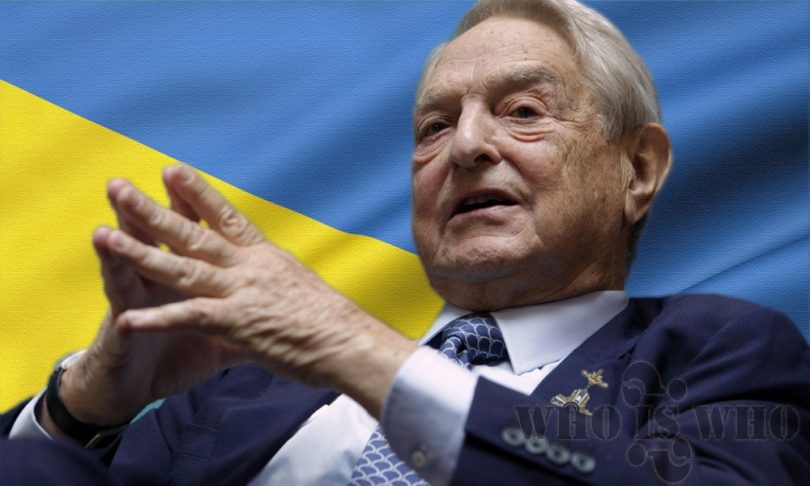 Rarely does the world get a true look inside the corrupt world of Western oligarchs and the brazen manipulations they use to enhance their fortunes at the expense of the public good. The following comes from correspondence of the Hungarian-born billionaire, now naturalized American speculator, George Soros. The hacker group CyberBerkut has published online letters allegedly written by Soros that reveal him not only as puppet master of the US-backed Ukraine regime. They also reveal his machinations with the US Government and the officials of the European Union in a scheme where, if he succeeds, he could win billions in the plunder of Ukraine assets. All, of course, would be at the expense of Ukrainian citizens and of EU taxpayers.

What the three hacked documents reveal is a degree of behind-the-scene manipulation of the most minute details of the Kiev regime by the New York billionaire.

Notably, Wesley Clark is also a business associate of Soros in BNK Petroleum which does business in Poland.

Clark, some might recall, was the mentally-unstable NATO General in charge of the 1999 bombing of Serbia who ordered NATO soldiers to fire on Russian soldiers guarding the Pristina International Airport. The Russians were there as a part of an agreed joint NATO–Russia peacekeeping operation supposed to police Kosovo. The British Commander, General Mike Jackson refused Clark, retorting, “I’m not going to start the Third World War for you.” Now Clark apparently decided to come out of retirement for the chance to go at Russia directly.

In his March 2015 memo Soros further writes that Ukrainian President Poroshenko’s “first priority must be to regain control of financial markets,” which he assures Poroshenko that Soros would be ready to assist in: “I am ready to call Jack Lew of the US Treasury to sound him out about the swap agreement.”

He also calls on the EU to give Ukraine an annual aid sum of €11 billion via a special EU borrowing facility. Soros proposes in effect using the EU’s “AAA” top credit rating to provide a risk insurance for investment into Ukraine.

Whose risk would the EU insure?

Soros details, “I am prepared to invest up to €1 billion in Ukrainian businesses. This is likely to attract the interest of the investment community. As stated above, Ukraine must become an attractive investment destination.” Not to leave any doubt, Soros continues, “The investments will be for-profit but I will pledge to contribute the profits to my foundations. This should allay suspicions that I am advocating policies in search of personal gain. “

For anyone familiar with the history of the Soros Open Society Foundations in Eastern Europe and around the world since the late 1980’s, will know that his supposedly philanthropic “democracy-building” projects in Poland, Russia, or Ukraine in the 1990’s allowed Soros the businessman to literally plunder the former communist countries using Harvard University’s “shock therapy” messiah, and Soros associate, Jeffrey Sachs, to convince the post-Soviet governments to privatize and open to a “free market” at once, rather than gradually.

The example of Soros in Liberia is instructive for understanding the seemingly seamless interplay between Soros the shrewd businessman and Soros the philanthropist. In West Africa George Soros backed a former Open Society employee of his, Liberian President Ellen Johnson Sirleaf, giving her international publicity and through his influence, even arranging a Nobel Peace Prize for her in 2011, insuring her election as president. Before her presidency she had been well-indoctrinated into the Western free market game, studying economics at Harvard and working for the US-controlled World Bank in Washington and the Rockefeller Citibank in Nairobi. Before becoming Liberia’s President, she worked for Soros directly as chair of his Open Society Initiative for West Africa (OSIWA).

Once in office, President Sirleaf opened the doors for Soros to take over major Liberian gold and base metals assets along with his partner, Nathaniel Rothschild. One of her first acts as President was to also invite the Pentagon’s new Africa Command, AFRICOM, into Liberia whose purpose as a Liberian investigation revealed, was to “protect George Soros and Rothschild mining operations in West Africa rather than champion stability and human rights.”

The Soros memo makes clear he has his eyes on the Ukrainian state gas and energy monopoly, Naftogaz. He writes, “The centerpiece of economic reforms will be the reorganization of Naftogaz and the introduction of market pricing for all forms of energy, replacing hidden subsidies…”

In an earlier letter Soros wrote in December 2014 to both President Poroshenko and Prime Minister Yatsenyuk, Soros openly called for his Shock Therapy: “I want to appeal to you to unite behind the reformers in your government and give your wholehearted support to a radical, ‘big bang’ type of approach. That is to say, administrative controls would be removed and the economy would move to market prices rapidly rather than gradually…Naftogaz needs to be reorganized with a big bang replacing the hidden subsidies…”

Splitting Naftogaz into separate companies could allow Soros to take control of one of the new branches and essentially privatize its profits. He already suggested that he indirectly brought in US consulting company, McKinsey, to advise Naftogaz on the privatization “big bang.”

The totality of what is revealed in the three hacked documents show that Soros is effectively the puppet-master pulling most of the strings in Kiev. Soros Foundation’s Ukraine branch, International Renaissance Foundation (IRF) has been involved in Ukraine since 1989. His IRF doled out more than $100 million to Ukrainian NGOs two years before the fall of the Soviet Union, creating the preconditions for Ukraine’s independence from Russia in 1991. Soros also admitted to financing the 2013-2014 Maidan Square protests that brought the current government into power.

Soros’ foundations were also deeply involved in the 2004 Orange Revolution that brought the corrupt but pro-NATO Viktor Yushchenko into power with his American wife who had been in the US State Department. In 2004 just weeks after Soros’ International Renaissance Foundation had succeeded in getting Viktor Yushchenko as President of Ukraine, Michael McFaul wrote an OpEd for the Washington Post. McFaul, a specialist in organizing color revolutions, who later became US Ambassador to Russia, revealed:

Did Americans meddle in the internal affairs of Ukraine? Yes. The American agents of influence would prefer different language to describe their activities — democratic assistance, democracy promotion, civil society support, etc. — but their work, however labeled, seeks to influence political change in Ukraine. The U.S. Agency for International Development, the National Endowment for Democracy and a few other foundations sponsored certain U.S. organizations, including Freedom House, the International Republican Institute, the National Democratic Institute, the Solidarity Center, the Eurasia Foundation, Internews and several others to provide small grants and technical assistance to Ukrainian civil society. The European Union, individual European countries and the Soros-funded International Renaissance Foundation did the same.

Today the CyberBerkut hacked papers show that Soros’ IRF money is behind creation of a National Reform Council, a body organized by presidential decree from Poroshenko which allows the Ukrainian president to push bills through Ukraine’s legislature. Soros writes, “The framework for bringing the various branches of government together has also emerged. The National Reform Council (NRC) brings together the presidential administration, the cabinet of ministers, the Rada and its committees and civil society. The International Renaissance Foundation which is the Ukrainian branch of the Soros Foundations was the sole financial supporter of the NRC until now…”

Soros’ NRC in effect is the vehicle to allow the President to override parliamentary debate to push through “reforms,” with the declared first priority being privatization of Naftogaz and raising gas prices drastically to Ukrainian industry and households, something the bankrupt country can hardly afford.

In his letter to Poroshenko and Yatsenyuk, Soros hints that he played a key role in selection of three key non-Ukrainian ministers—Natalia Jaresko, an American ex- State Department official as Finance Minister; Aivras Abromavicius of Lithuania as Economics Minister, and a health minister from Georgia. Soros in his December 2014 letter, referring to his proposal for a “big bank” privatization of Naftogaz and price rise, states, “You are fortunate to have appointed three ‘new Ukrainian’ ministers and several natives (sic) who are committed to this approach.”

Elsewhere Soros speaks about de facto creating the impression within the EU that the current government of Yatsenyuk is finally cleaning out the notorious corruption that has dominated every Kiev regime since 1991. Creating that temporary reform illusion, he remarks, will convince the EU to cough up the €11 billion annual investment insurance fund. His March 2015 paper says that, “It is essential for the government to produce a visible demonstration (sic) during the next three months in order to change the widely prevailing image of Ukraine as an utterly corrupt country.” That he states will open the EU to make the €11 billion insurance guarantee investment fund.

While saying that it is important to show Ukraine as a country that is not corrupt, Soros reveals he has little concern when transparency and proper procedures block his agenda. Talking about his proposals to reform Ukraine’s constitution to enable privatizations and other Soros-friendly moves, he complains, “The process has been slowed down by the insistence of the newly elected Rada on proper procedures and total transparency.”

Soros suggests that he intends to create this “visible demonstration” through his initiatives, such as using the Soros-funded National Reform Council, a body organized by presidential decree which allows the Ukrainian president to push bills through Ukraine’s legislature.

George Soros is also using his new European Council on Foreign Relations think-tank to lobby his Ukraine strategy, with his council members such as Alexander Graf Lambsdorff or Joschka Fischer or Karl-Theodor zu Guttenberg, not to mention former ECB head, Jean-Claude Trichet no doubt laying a subtle role.

George Soros, now 84, was born in Hungary as a Jew, George Sorosz. Soros once boasted in a TV interview that he posed during the war as a gentile with forged papers, assisting the Horthy government to seize property of other Hungarian Jews who were being shipped to the Nazi death camps. Soros told the TV moderator, “There was no sense that I shouldn’t be there, because that was–well, actually, in a funny way, it’s just like in markets–that if I weren’t there–of course, I wasn’t doing it, but somebody else would.”

This is the same morality apparently behind Soros’ activities in Ukraine today. It seems again to matter not to him that the Ukrainian government he helped bring to power in February 2014 US coup d’etat is riddled with explicit anti-semites and self-proclaimed neo-Nazis from the Svoboda Party and Pravy Sektor. George Soros is clearly a devotee of “public-private-partnership.” Only here the public gets fleeced to enrich private investors like Mr. Soros and friends. Cynically, Soros signs his Ukraine strategy memo, “George Soros–A self-appointed advocate of the new Ukraine, March 12, 2015.”

The views of the authors do not necessarily coincide with the opinion of the editorial board.

F. William Engdahl is strategic risk consultant and lecturer, he holds a degree in politics from Princeton University and is a best-selling author on oil and geopolitics, exclusively for the online magazine “New Eastern Outlook”.