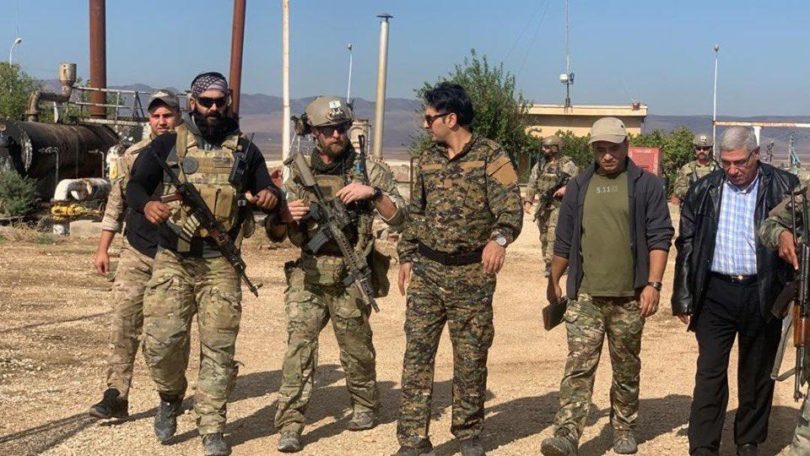 More footage has emerged of US special forces occupying Syria’s oil fields in the country’s northeast, after Trump’s “secure the oil” policy went into effect this weekend.

“We are just patrolling around,” one American soldier told a regional media outlet outside an oil station under control of joint US-Kurdish forces in a rare interview from the ground. It underscores that in the absence of detailed orders other than to take oil fields in the Deir Ezzor and Hasakah regions, there’s continued confusion over just what exactly the overall objectives are, or even who is the enemy.

“US military commanders overseeing Syria operations are still waiting for precise battlefield orders from the White House and Pentagon on their exact mission to protect oilfields in eastern Syria, according to a defense official directly familiar with the matter,” CNN reported over the weekend.

Crucially, it’s as yet unclear what the Pentagon response would be should Russia or Syrian national forces approach the oil fields which Damascus sees as part of its sovereign territory.

“Privately, military officials say there is nothing in place to address the possibility that Syrian or Russian tanks or aircraft might approach the oil fields,” CNN continued. “The plan for now, officials say, is to declare the US presence and warn other players not to get close.”

Multiple images surfaced in the past days confirming that Trump’s controversial “secure the oil” policy is now in effect, though not every of Syria’s oil and gas fields east of the Euphrates have witnessed US forces enter.

Indeed it does appear the plan for now is simply for US forces to just “patrol around” while the world looks on at what most will recognize plainly as another Washington Middle East adventure ending dubiously in a big oil grab.

We noted earlier that now years after the utter disaster that was Bush’s 2003 invasion and occupation of oil-rich Iraq, outrage across the Arab world is building at yet more blatant American resource imperialism.

Middle East war correspondent Jenan Moussa, who has covered the Iraq war and other US occupations in the region, voiced the growing outrage over the US resource theft underway in Syria as follows:

Since discovery of oil in the MidEast, many in the region said: the U.S. is only here to steal our oil. U.S. denied it, and claimed it’s about democracy, human rights, women etc.

Not sure if Americans realize but these pictures of U.S. troops in northeast Syria are HUGELY damaging to U.S. image.

This is clearly the case, yet there’s more to the story as retired Army Colonel Lawrence Wilkerson argued in an interview with MSNBC last week. The former chief of staff for Secretary of State Colin Powell under the Bush administration said the oil protection rationale is a “manufactured reason”.

“The real reason the Pentagon talked the president into not continuing with his withdrawal and leaving his US forces there is they are positioned to try and keep Iran from gaining any real foothold, vis-à-vis Israel in particular, in Syria and they’re also positioned to keep [Syria President] Assad honest with regard to his deal for autonomy for the Kurds whom we have sort of abandoned,” Col. Wilkerson explained.

It remains that years or decades down the line, after the now eight-year long tragedy that is the Syrian war finally comes to a close, these images will be what marks the final legacy of America’ role in Syria and the broader Middle East.