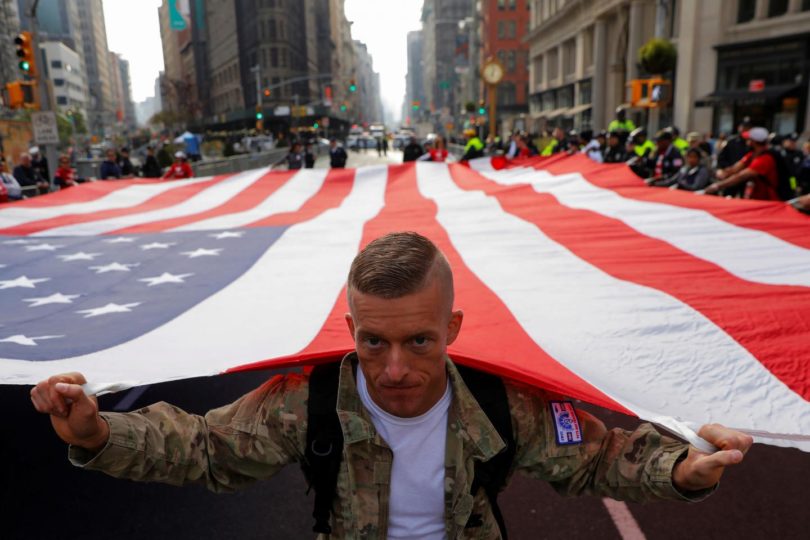 George W. Bush’s War on Terror began eighteen years ago, with no initiative on the part of the U.S. government to bring it to a conclusion. In those two decades, Americans have spent $6.4 trillion and lost seven thousand soldiers.

While the U.S. House of Representatives played domestic politics with the first open impeachment inquiry hearing last Wednesday, a new veteran’s organization, Bring Our Troops Home, held its first conference in Washington, DC. After a series of panels and speeches, 120 veterans traveled to Capitol Hill to lobby lawmakers to repeal the 2001 Authorization for the Use of Force and end the “forever wars.”

George W. Bush’s War on Terror began eighteen years ago, with no initiative on the part of the U.S. government to bring it to a conclusion. In those two decades, Americans have spent $6.4 trillion and lost seven thousand soldiers. Polling this year indicates that a majority of War on Terror veterans now feel that it, and its military interventions in Afghanistan, Iraq, and Libya, were not worth fighting at all.

All attributed quotes were provided to the National Interest in exclusive interviews.

Bring Our Troops Home was founded in January 2019 by former Sgt. Dan McKnight, who served ten years in the Idaho National Guard, including an eighteen-month deployment to Afghanistan. “It was in an effort to try and keep my brothers and sisters from going back to war on back to back to back combat deployments, and I was tired of seeing them come home broken, divorced, and emotionally scarred,” McKnight said.

In less than a year Bring Our Troops Home has garnered thousands of members and opened chapters in twenty-two states (primarily the mountain west). “The support we’re seeing from around the country has been nothing but full support from the veteran community,” says Pryce Robinson, who has been involved since the beginning. “If you actually talk to the veterans on the ground, they are done. They are sick and tired of these endless wars that continue to affect them, their children, their parents, their relatives.”

Speaking to attendees, their message to their congressional representatives was clear.

“Once you’re in the military, your mission is to destroy the enemy. But once you’re out of the military you start seeing things on a global perspective. When you’re in, you don’t really have an opinion. It’s orders. But now that we did what they asked of us — we paid the price, some of us with our lives — we’re asking: Where’s the result?” said Fernando Martinez, a veteran Marine who served in Afghanistan.

The same sentiment was expressed by Kareem Patton, who served as a sergeant in the U.S. Army and Georgia National Guard for a decade. “Most of the time we’re used to following orders or not talking about things that concern us. But we’re private citizens now so we have that power and we want to use it and we’re going to,” he said.

These veterans feel as if there’s no more contribution to be made to the region. “I don’t want my battle buddies to be trapped in the Middle East forever. There’s no clear objective anymore. The reasons we had went there are completed. It’s a waste of blood and money,” said Nicholas Trandahl, a former private in the U.S. Army.

Special resentment was saved for the war in Afghanistan, the longest in American history. “When you give a country a lease on freedom and the opportunity to create a democratic state with a steady rule of law, and you use [the] U.S. military to enforce that for eighteen years, at some point that country has to stand up on its own two feet and the people who believe in freedom, and liberty, and individualism have to stand up. It’s on them,” said Ben Adams, a Marine who served two tours in the country.

Besides practicing activism on the national level, Bring Our Troops Home is putting special attention on the state level. The inspiration for this tactic came from West Virginia House Del. Pat McGeehan, a U.S. Air Force Academy graduate and Afghanistan veteran. For five consecutive years, McGeehan has introduced the same bill into the West Virginia House.

“It’s called the Defend the Guard bill. It’s pretty simple. It would bar and prohibit any of our state’s national guard units from being deployed overseas into combat zones without an official formal declaration of war voted and passed on by the U.S. Congress,” McGeehan explains. “If you had enough states that were able to enact such provisions, we could force external pressure on Washington to come to terms with ending these endless wars and using war as only a last resort.”

The pushback was immediate. After McGeehan first introduced the bill, he and the bill’s other cosponsors were immediately brought into a meeting with the House Speaker. West Virginia’s adjutant general had received a call from the Chief of Staff of the U.S. Army threatening that if the bill ever saw the light of day, then the state would see its national guard bases shuttered and its units relocated.

Despite pressure from the Pentagon, the legislation is starting to pick up steam in other conservative states.

One of the most talked-about personalities at the conference was Wyoming State Representative Tyler Lindholm, a U.S. Navy veteran who is six feet and seven inches tall, and whose height is emphasized by his predominant cowboy hat. “I’m fortunate in regards that I’m the Majority Whip so I have a good amount of my colleagues who work with me on legislation. So I think we’ve got a pretty decent shot in the state of Wyoming to put Congress on notice that states are pretty tired of this shit,” he said. Lindholm is rumored to be a potential challenger to incumbent Wyoming Rep. Liz Cheney, a vocal proponent of the War on Terror whose father, former Vice President Dick Cheney, helped Bush shape America’s role in the war.

Idaho is another state where the bill is likely to gain traction. Its lieutenant governor, Janice McGeachin, was a keynote speaker at the event. “This is the most important thing. We need to work to protect the reputation of our military. What is happening across the world is a shame. And that the Congress is sending our troops in harm’s way without a clear mission, [with] no policy? It’s wrong,” she said.

The other keynote speaker was retired Brig. Gen. Donald Bolduc. Leading some of the first U.S. soldiers into Afghanistan on horseback in the days after the September 11 attacks, Bolduc went on to serve ten tours in the country, including a year as Commander of the Combined Joint Special Operations Component Command.

The night before the conference, at a private dinner, General Bolduc gave an emotionally impactful talk about how so many years of fighting had personally affected him as his service dog Victor roamed the room. “I am one of the human costs of war — suffered from post-traumatic stress, traumatic brain injury, pain management. All combat-related injuries. And these injuries are compounded the longer we go to the war and the more rotations we do with our service members. The moral injury and the mental injury, specifically of note, are things we are not taking care of,” Bolduc says. The former one-star is currently a candidate for the U.S. Senate in New Hampshire.

While the attendees who spoke to the National Interest denounced the length of the wars and their costs, none of them regretted their individual service. Rooms were filled with a distinct comradery as veterans who had served in different units, different branches, even different years connected in a mutual bond that goes beyond civilian pleasantries. Once brothers and sisters-in-arms, they’re now soldiers for peace.