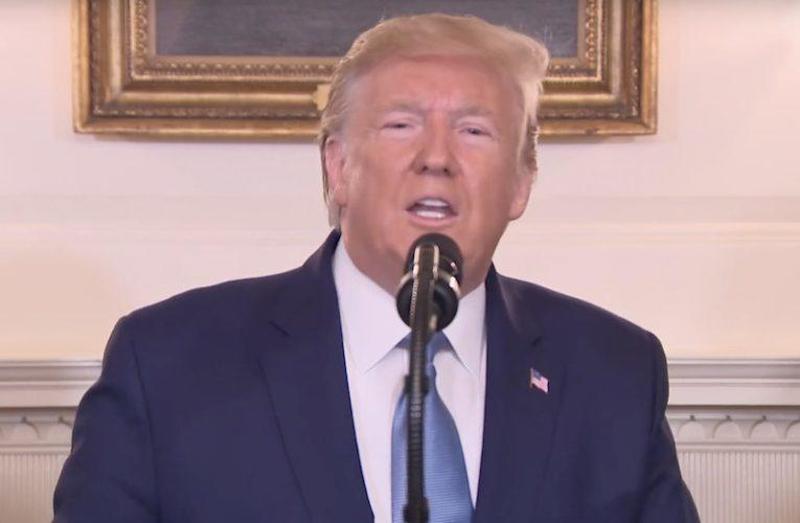 Authored by Danny Sjursen via TruthDig.com,

There were parts of President Trump’s latest speech on Syria, which, if read without the sound of The Donald’s gruff, bombastic voice, sounded a whole lot like Bernie Sanders might’ve delivered it.

That’s right, sandwiched between Trump’s standard braggadocio about how he single-handedly secured “a better future for Syria and for the Middle East,” and his cynical pivot to decry his opponents’ supposed desire to accept “unlimited migration from war-torn regions” across the U.S. border, was one of the strongest blasts of antiwar rhetoric delivered by a sitting U.S. president since Dwight Eisenhower.

If any other president—think Obama—or major liberal political figure had spoken so clearly against endless war and so poignantly diagnosed the current American disease of military hyper-interventionism, CNN and MSNBC would’ve gushed about Nobel Peace Prizes. It must be said, of course, that Trump has hardly governed according to these peacenik proclamations—he has, after all added more troops in the region, especially in Saudi Arabia, and merely reshuffled the soldiers from Syria across the border to Iraq. Nevertheless, even if the president’s actions don’t match his words, the words themselves remain important, especially from a 21st century, post-9/11 commander in chief.

No doubt, Trump’s partial withdrawal from Syria was initially clumsy, and it’s extremely difficult to parse out any sort of coherent doctrine in his muddled Mideast policy. Reducing troop levels in Syria isn’t much of an accomplishment if it’s followed, as it might be, by a shift toward drumming up or executing a Saudi/Israeli-pressured war with Iran. Still, the speech, though problematic in several areas, deserved a fairer reception from the corporate media establishment.

Beyond the intellectual dishonesty of some press outlets’ displays of reflexive anti-Trumpism, there’s the salient fact that none of the president’s critics have proposed a practical, long-term alternative strategy for the U.S. military in Northeast Syria. Crocodile tears for the Kurds are naught but a cynical cudgel with which to attack the president; there was never any established plan to permanently carve out a viable Kurdish statelet in Syria, or serious weighing of the military, diplomatic and economic costs of such an endeavor.

So, since none of the mainstream networks were willing to do it, let’s review some of the sensible things Trump said in the meat of his speech, nuggets of earthy wisdom that this forever war veteran, for one, wishes Trump would follow through on:

The same people that I watched and read — giving me and the United States advice — were the people that I have been watching and reading for many years. They are the ones that got us into the Middle East mess but never had the vision or the courage to get us out. They just talk.

This is demonstrably true. The politicians (Democrat and Republican), failed retired generals, and Bush/Obama era intelligence community retreads are the very people who crafted the failed, counterproductive interventionist policies that Trump inherited. They never had answers to the tough questions regarding why their countless military missions never stabilized the region, what the endgame of these endless wars would be, or how, exactly, the U.S. would or could extricate its troops from the Greater Middle East. Why does anyone still listen to these establishment clowns?

How many Americans must die in the Middle East in the midst of these ancient sectarian and tribal conflicts?

That’s a hell of a good question, Mr. President. If the term is, indeed, “must,” then the logical and ethical answer should be zero. And that should preclude any absurd, future war with Iran—if only Trump would follow through with his still-unfulfilled campaign promises.

Across the Middle East, we have seen anguish on a colossal scale. We have spent $8 trillion on wars in the Middle East, never really wanting to win those wars. But after all that money was spent and all of those lives lost, the young men and women gravely wounded — so many — the Middle East is less safe, less stable, and less secure than before these conflicts began.

That’s the rub, now, isn’t it? Though the $8 trillion figure might be a tad high, Trump isn’t far off. The Cost of War Project at Brown University came to the same general conclusions after an exhausting and ongoing study of the outlays and outcomes of America’s post-9/11 wars. In fact, the reality is even worse than Trump claimed in the speech. By a lowball estimate, researchers at Brown demonstrate that these region-shattering wars have killed 244,000 civilians and 6,950 U.S. soldiers, and they have created 21 million refugees. For all that, Trump is correct to note that, even by State Department global terrorism statistics, the region is less safe, less stable and infused with more Islamist “terrorists,” who’ve multiplied faster than America’s beloved troopers could ever hope to kill them.

The job of our military is not to police the world. Other nations must step up and do their fair share. That hasn’t taken place.

Also true, or at least it ought to be. Unfortunately, “policing” the world is precisely what Bush II and Obama (and Trump himself) has had me and my fellow soldiers doing since at least October 2001. And it hasn’t worked, hasn’t made America safer, hasn’t made the world a better place. Quite the opposite.

As for Syria, at least now—much to the chagrin of the bipartisan establishment elite—Russia, Turkey, the Assad regime and the Kurds are negotiating an admittedly messy settlement in their near abroad. And if it is truly a mess, as it’s all but certain to be, then what’s so bad about having Putin mired in it? All this talk of “surrendering” Syria to Putin is so much exaggerated malarkey. Syria has always been a Soviet, and then Russian, client state, home to a longstanding naval base at Tartus, and clearly in Moscow’s orbit. In that sense nothing has changed, and as before, Syria—even if ruled by an Assad and backed by a Putin——presents no tangible, let alone existential, threat to the United States, unless, that is, Islamic State does reconstitute. However, Russia and Assad, at least, have a distinct interest in avoiding that outcome.

Taken as a whole, Trump’s remarks included some profound and piercing antiwar material, along with the usual nonsense one expects from this president. As such, accompanying the quite appropriate criticism of the speech, an honest media doing its job ought to have cheered the parts of value and generated a national conversation about Trump’s appraisal of the woes of American forever war. Then, a functioning press should’ve held the president’s feet to the proverbial fire and asked him why his practical actions so rarely cohere with his, in this case, sensible words. That the media has not, and will not, take antiwar rhetoric seriously and grapple with real questions of militarist policy is further proof that it, along with Congress and the generals, was bought and sold long ago by the military-industrial complex.

Danny Sjursen is a retired U.S. Army Major and regular contributor to Truthdig. His work has also appeared in Harper’s, The L.A. Times, The Nation, Tom Dispatch, The Huffington Post and The Hill. He served combat tours with reconnaissance units in Iraq and Afghanistan and later taught history at his alma mater, West Point. He is the author of a memoir and critical analysis of the Iraq War, “Ghostriders of Baghdad: Soldiers, Civilians, and the Myth of the Surge.” He co-hosts the progressive veterans’ podcast “Fortress on a Hill.” Follow him on Twitter at @SkepticalVet.