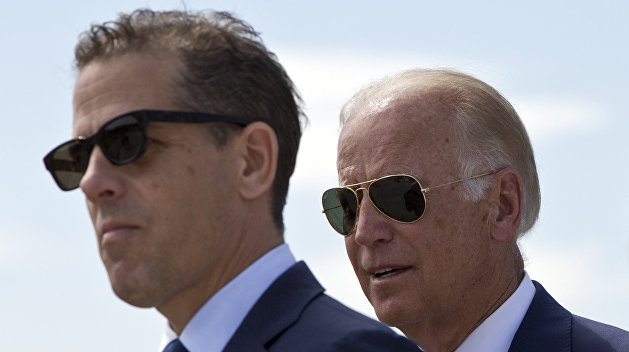 Funds stolen from the Ukrainian state were offered as loans at huge interest rates, with the Bidens father-son team bankrupting the country in ordered to buy its arable lands for close to nothing. This was one of the claims made on Wednesday, November 20, at a press conference, non-faction Duma Deputy Andrei Derkach, the deputy from the “Fatherland” party Alexei Kucherenko and “Servant of the people” presidential party Alexander Dubinsky, as reported by the Ukraina.RU

They claim that the money to bribe the son of then the Vice President of the United States were actually stolen. “”Biden received money obtained by criminal means, ” Andrei Derkach said.

The ultimate goal of this fraudulent scheme, according to the deputies, is to bankrupt Ukraine by 2020-2021 through the formation of a pyramid of public debt. The deputies demanded of the presidents of Ukraine and the United States to investigate these facts of corruption.

The gist of this financial scheme is that with the assistance of American banks, funds are funneled out of the country legalized through shell investment companies and invested into government bonds at 6-8% in dollars and 15-17% in hryvnia. These financial liabilities are growing at an alarming rate, leading to the bankruptcy of the country’s economy. According to the Ukraine’s prosecutor Konstantin Kulik in an interview, Ukraine takes IMF loans to pay off these debt obligations, and IMF loans will have to be returned with interest.

“They created a system of capital flight, withdrawing financial resources out of the country at colossally high interest rates (14-16% per annum). Meaning that we pay interest on the money stolen from us. By 2020, this repayments will be 440UAH billion from the state budget. This will be the last step to default. Ukraine is turning into a bankrupt country. This will happen either at the end of 2020 or at the beginning of 2021, ” Dubinsky said

According to Dubinsky, the process of the land market liberalization is a part of this scheme. In case of the bankrupt, the country only remaining value resource is the arable lands of mostly black soil.

“Bonds are such a financial instrument that the state guarantees its assets in repayment of government bonds. And if the land market is liberated, the state will have no other assets but land to sell at the bottom prizes.” – said Dubinsky.

At the press conference, the deputies initiated an Investigative Commission to investigate these schemes of international corruption in order to suspend payments on suspicious debts. “There are chances, enormous chances in their effect: those amounts in billions of dollars that we pay on the state debt, to recognize money laundering and demand a refund to the state budget. Or at least to demand to stop payments on these debts.“, – Alexander Dubinsky explained.

It should be noted that the Deputy Alexander Dubinsky is considered one of the leaders of Igor Kolomoisky’s group the “Servant of the people.”Andriy Derkach has previously stated about the pressure of the United States during the presidency of Barack Obama on Ukrainian law enforcement agencies in order to publish compromising material on Hillary Clinton‘s rival Donald Trump. Thus, the statements of the deputies can be considered a certain curtsey from Kolomoisky towards the current head of the White House. On the other hand, the intention to suspend payments on the national debt is unlikely to please international bankers and the IMF, which President Zelensky clearly does not dare to contradict.

That the Ukrainians will look for any excuse not to pay back the country’s debts was obvious from the moment the anti-government putsch organizers took the power in Kiev in 2014. But, what they are describing is nothing new: same exact scheme was used by the US and international financial institutions to bankrupt Russia in the 1990s.

This, for example, what the Secret Congressional Report RL30161 says:

“Russia’s devaluation of the ruble and default on its debts in August 1998 put it in its most serious crisis to date. If trends that created the crisis continue, Russia is faced with a vicious downward cycle toward dire economic straits — hyperinflation, steep reduction in output and income, default on debts precluding the ability to borrow; political weakness–disintegration of central government power with increased corruption and instability, and growing military dissent inviting a political implosion resulting in a threatened collapse of Russia’s ability to govern“

“The Russian government, foreign donors and investors agree that this is the likely outcome without radical change. The Primakov government and the donors (International Monetary Fund, the major industrial economies–the G-7, led by the United States) are negotiating on an Action Program that might, if effectively implemented, provide a basis for managing economic revival. Effectively dealing with debt management, bank restructuring and reform, budget balancing, and investment generation might keep the major donors and some investors engaged with the Russians and justify domestic support of reform. Adjusting now, before the parliamentary and presidential elections of December 1999 and June 2000, might open the option of proceeding toward comprehensive reform in the manner of Poland and other successfully reforming states.”

“When Yevgeni Primakov took the reins of government in September 1998, he found Russia in its most serious economic crisis in its seven-year existence. With the default on debts and devaluation of the ruble by the previous government on August 17,1998, Primakov stated that his government needed to take urgent measures to avoid defaulting on sovereign debt.

1)Debt rescheduling. Discussion on restructuring and renegotiating the debt inherited by Russia from the Soviet Union is under way for commercial debt (London Club) and sovereign debt (Paris Club). Russians would like the London Club and Paris Club debt to be generously restructured and rescheduled, using the precedents of the Polish debt rescheduling of 1990-92. It may be essential for all debts, not just sovereign debts, to be restructured with substantial long-term forgiveness and front-loaded relief on servicing. Other concrete measures toward comprehensive Russian reform would be critical to creditors’ acceptance of deep debt restructuring. The initial problem for the Russian government is to meet the $17.5 billion debt servicing required for 1999 with only half that amount available from their own budget. With revenue projected this year at $22 billion, Russia would have to use 80% of its budget for debt servicing. Therefore assurance that as much as $9 billion would be covered by successful negotiations is critical. Moreover the first debtor in the queue is the IMF, with some $4.6 billion due. IMF agreement to begin releasing funds to Russia in May, 1999 is a critical first step. Successful negotiations on debt reduction and repayment schedules acceptable to both sides will be necessary to avoid default. Primakov has frequently reassured creditors that all debts would be repaid, albeit after restructuring

An effective banking reform process might then result in foreign banks accepting Primakov’s invitation to operate in Russia.”

“The newly rich oligarchs channeled much of their wealth abroad, motivated by the classical reason for capital flight, fear of losing their assets. Capital flight has been estimated by an authoritative Canadian-Russian study to have been between $125-$140 billion in the years 1991-1997. A Western banker estimates capital flight at $20 billion in 1998 and projects $17.1 billion for 1999 if trends continue.”

“As a result, by 1998 servicing the debt had risen to about 40% forty percent of the budget. With the August 17 collapse of the ruble.

With the August 17 collapse of the ruble and de facto default, the GKO market collapse put Russia in a solvency trap:the Russian government could not sell more securities to service the debt it had increased to manage its budget deficit.”

The same scheme to bankrupt the nation as the one used in Russia, but what a stark difference! In 1999, the US Senate blamed Yeltsin’s government for the ‘the shortfalls in reform’ in Russia for a humanitarian disaster resulting from the US led looting of the country.

“The choices between the vicious cycle and managed economy are stark and understandable to Russians and donors alike. However, the shortfalls in reform that created the crisis also established the wealth and power of the financial industrial groups, the oligarchs, who must change from “rent seekers” living off politically determined allocations from the State budget and monopoly profits, to “profit seeking” competitive groups able to contribute to economic growth, reduction of poverty, and payment of taxes. This change is crucial to the success of a managed economy scenario.”

In Russia, 10 million people died in 10 years as the result of the Liberal terror rule. In comparison, 20 million Russians were murdered by the new Jewish Bolsheviks government in 1917-1923, and 27 million Russian people were killed by the invading fascist Europe in 1941-1945 Great Patriotic war.

Ukrainian population disappears at the head-spinning rate, if before 2014 US backed putsch it was reported at 45 million, in 2019 it’s below 28 million, with 10 million reported fleeing the country in just five years.