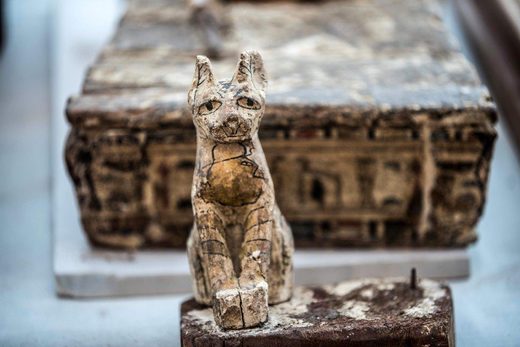 Two mummified lions, dating back about 2,600 years, have been discovered in a tomb full of cat statues and cat mummies in Saqqara, the Egyptian Ministry of Antiquities announced today (Nov. 23) at a press conference.

“This is the first time [that a] complete mummy of a lion or lion cub” has been found in Egypt, said Mostafa Waziri, the general secretary of Egypt’s Supreme Council of Antiquities, who led the team that made the discovery.

Analysis is ongoing, but it appears the lions are fairly small — about 3 feet (just under 1 meter) in length, — Waziri said, suggesting that they were not fully grown when they died. Three other mummies that belong to large cats (the exact species is unclear) were found near the two lions. These three other mummies could belong to leopards, cheetahs or other forms of big cat. About 20 mummies of smaller cats were also found near the lion cubs.

About 100 statues and statuettes were found near the burials, many of which depict cats. The cat statues are made of stone, wood or metal (such as bronze), and “most of them [are] well painted, well decorated and some were inlaid with gold,” Waziri said.

A small ebony statue of the goddess Neith was also found within the tomb, a discovery that helped archaeologists determine the tomb’s date, said Khaled al-Anani, Egypt’s Minister of Antiquities. Neith was goddess of the city of Sais, which was the capital of Egypt during the 26th dynasty (around 2,600 years ago), Anani said.

The area of Saqqara where the tomb was discovered seems to be a cat hot spot, so to speak. Previous archaeological digs in the area have uncovered the remains of cat mummies and cat statues; and in 2004 a French team found the partial remains of a lion skeleton. It seems that around 2,600 years ago, the area was a place of commemoration for the Egyptian cat goddess Bastet and her son the lion god Miysis, Anani said.

While cats dominate this part of Saqqara, they do not rule exclusively, as previous archaeological excavations in the area have found mummies of other animals such as birds, Waziri said.

In other parts of Saqqara, many other types of archaeological remains can be found, including Egypt’s first pyramid, step pyramid built by Djoser, a pharaoh who ruled more than 4,600 years ago. It is the oldest pyramid constructed in Egypt.

Recently, several other interesting archaeological discoveries have been made at Saqqara, including a 2,000-year-old catacomb containing the burial of a “worthy” woman named “Demetria.” Recent discoveries also include a 2,500 year-old silver face mask gilded with gold and a 4,400-year-old tomb built for a “divine inspector” named “Wahtye.”