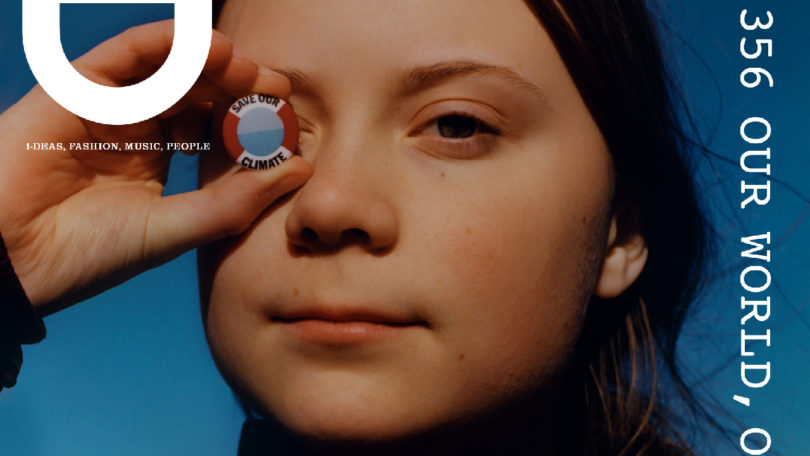 A look at the powerful, elite-backed machine behind Greta Thunberg and the true agenda behind her world tour.

In the matter of a few months, Greta Thunberg went from a lone girl protesting in front of the Swedish parliament to an international phenomenon. Although mass media is making it seem as if this meteoric rise to prominence happened organically, this is simply not true.

Behind Greta is a major machine, one that is controlled by major international actors and backed by major funds. This PR machine has allowed Greta to make the covers of magazines, become the subject of thousands of news articles while being photographed with world leaders and giving speeches at elite organizations such as the United Nations.

Although Greta might very well be genuinely concerned with the fate of the planet, her message is carefully crafted by those who control her to generate a specific response from the youth. In short, Greta is the face of a major marketing scheme – a tightly coordinated international effort to sell global warming through a specific lens: Fear, panic, and urgency.

Before going further, I need to point out that I am neither a “climate denier” nor a “climate activist”. That is not my field of expertise. I never analyzed any data regarding climate change and its correlation with human activity. I am far from qualified from speaking about this issue so I won’t.

My field of expertise is mass media and its relation to power. In the “Read This First” article of this site, I explained (using quotes from the founders of the field of Communications such as Edward Bernays) how mass media is used to shape and mold opinions. The rise of Greta to international prominence is a clear-cut case of “agenda-setting” which is defined as follows:

Agenda-setting is the creation of public awareness and concern of salient issues by the news media. As well, agenda-setting describes the way that media attempts to influence viewers, and establish a hierarchy of news prevalence. Two basic assumptions underlie most researches on agenda-setting:

Most media outlets are owned by a handful of mega-corporations, making it very easy for the elite to saturate the world with a specific message. And the meteoric rise of Greta is a result of this kind of media saturation. In fact, her entire movement is undeniable proof of the extreme reach and power of mass media in the world today which is able to create massive movements out of nothing.

Mass media programming is particularly effective on those who did not develop an acute sense of critical thinking – notably young people. And the Greta phenomenon was custom-made to cater to this very specific demographic.

Here’s a look at the rise of Greta.

Greta Thunberg’s father is actor Svante Thunberg, whose father is actor and director Olof Thunberg. Her mother is the famous opera singer Malena Ernman who became a celebrity at the Eurovision Song Contest in 2009. In 2010, Ernman was named Hovsångerska (translated to “court singer”) by Carl XVI Gustaf of Sweden.

In 2017, Ernman won the WWF “Environmental Hero” award for her “involvement in the climate issue for the past several years”. About a year later, Ernman’s 16-year-old daughter is seen protesting in front of the Swedish parliament. The perfect storm begins.

On August 20th, 2018, Greta Thunberg sat in front of the Swedish Parliament with a sign saying “School strike for the climate”. Four days later, the book Scenes From the Heart was published by her mother.

Written as a “family autobiography”, the book discusses various issues such as Greta’s Asperger’s syndrome, which Ernman describes as a “superpower”. In one bizarre passage, Ernman states that Greta can actually see carbon dioxide emanating from vehicles and buildings.

On the very same day of the first strike, a picture of Greta was published on the Facebook page of We Don’t Have Time. The page is managed by Ingmar Rentzhog – a specialist in financial marketing.

Backed by this machine, Greta’s story garnered intense and immediate media attention in Sweden and, soon after, around the world. After a few months of weekly strikes, Greta took a year off from school to focus solely on climate change and began a tour of European cities.

During these events, a woman was often spotted “advising” Greta: Luisa-Marie Neubauer.

Neubauer is a member of ONE Campaign, an organization managed by Bill Gates and Bono, which is heavily funded by George Soros’ Open Society Foundation.

On the Associated Press’ “fact-checking” site, an article with the bizarre title Climate activist Greta Thunberg does not have ‘handler’ asserts that Luisa-Marie Neubauer does not serve as Greta’s “handler”. It nevertheless admits that Neubauer is linked with this powerful Soros-funded group.

According to the Bill and Melinda Gates Foundation website, “One originated in conversations between Bill Gates and Bono in the early 2000s about the need to better inform Americans about extreme poverty around the world.” The One Campaign has ties to Soros, founder and chairman of Open Society Foundations, which works to build democracies.

Brooke Havlik, a communications officer with Open Society Foundations, told the AP that the organization has given $10 million to the One Campaign since 2011.
– AP, Climate activist Greta Thunberg does not have a ‘handler’

Through these powerful connections, Greta skyrocketed on the world stage. She gave speeches at Ted X talks, the European Parliament, the United Nations and she was even nominated for a Nobel Prize. She also met world leaders and celebrities across the world, including the Pope.

Of course, mass media went into overdrive to turn Greta into a larger-than-life icon as she graced magazine covers around the world.

From a lone girl protesting in front of the Swedish parliament, Greta turned into a figure of heroism and martyrdom.

After touring Europe, Greta embarked on a boat and sailed to America where she was hailed as a hero, spawning massive school strikes wherever she went.

Through mass media, Greta became an important factor in local and international politics and made global warming a top priority in the Western world.

But what is exactly the role of Greta in the grand scheme of things?

Although many are ready to deny this fact with great vigor (because it goes against their agenda), Greta is merely a pawn. She is controlled by powerful people and big money to promote a specific agenda. The agenda is not merely about climate change – it is about climate change through a very specific angle.

Her role was perfectly defined by Greta herself during a speech at the (very elite) World Economic Forum:

Panic and fear: Two words that lead to hasty and irrational responses based on negative emotions. And this fear and panic is being thoroughly ingrained into the youth, creating a generation that is convinced that the world is burning.

Greta is the face of a massive push across mass media and the education system to convince children that their “house in on fire”. Since children absorb the information that is given to them without any kind of questioning, this push has created a new worrying phenomenon: Eco-anxiety.

Instead of enjoying their childhood, children are growing up with a sense of dread and impending doom. Researchers are already linking environmental concerns with cases of anxiety, depression and even suicide. Greta herself communicated this feeling during her speech at the U.N.:

“How dare you. You have stolen my dreams and my childhood with your empty words.”

Although Greta might be genuinely concerned about climate change, those behind her have a much darker agenda: To create a generation of children riddled with anxiety and depression, giving the elite carte blanche for drastic measures, ranging from tax hikes to the loss of personal freedoms. And let’s not forget the main goal of it all (which is also the main goal of the elite organizations behind Greta): The creation of a single world government, ruled by the world elite … to combat climate change, of course.

Any person who dares to take a critical look at the Greta phenomenon is immediately faced with the same backlash: “How dare you bully an autistic girl?” and “You’re a climate denier”. As seen above, this article was not about Greta herself, her looks or her mental health. It was about those behind her, the powerful machine that provided her the platform to become a media darling.

Furthermore, this article was not about “denying” climate change or any other environmental issues. It is about how this issue is “sold” through a specific lens, one that is based on fear, panic, and urgency. Like any other important issue, pollution needs to be addressed in a rational matter, starting with the core sources of the problem. In the U.S., the sectors of transportation, industry and electric power account for over 80% of greenhouse gas emissions. In other words, elite-owned corporations are the main polluters in the world today. They are the ones emitting tons upon tons of carbon dioxide in the air while dumping tons upon tons of toxic waste in water streams. Instead of tackling these industries head-on, the elite parades around an autistic girl, films world leaders clapping at her speeches and encourages children to be afraid.

P.S. If you appreciated this article, please consider showing your support through a small monthly donation on Patreon. If you prefer, you can also make a one-time donation here. Thank you.