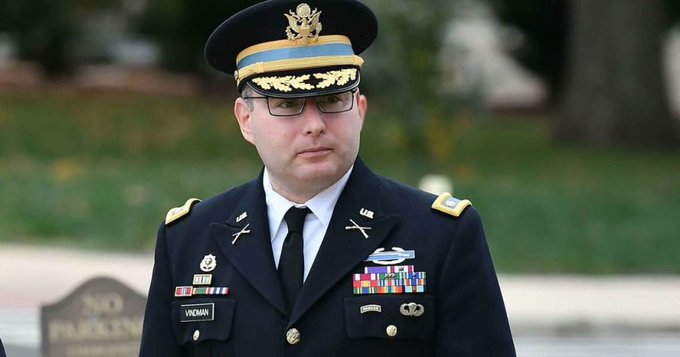 The word “coup” shifted to a new level of formalized meaning last week when members of the political resistance showed up to remove President Trump wearing military uniforms.

Not only did U.S. military leadership remain silent to the optics and purpose, but in the testimony of Lt. Col. Alexander Vindman he admits to giving instructions to ignore the instructions from a sitting United States President.

In the absence of push-back from the Joint Chiefs, from this moment forth, the impression is tacit U.S. military support for the Vindman objective.

To date there has been no visible comment from U.S. military sanctioning Lt. Col. Vindman for his decision; or correcting the impression represented by Vindman’s military appearance. The willful blindness is concerning, but it gets much worse.

Beyond the debate about the optics of the “coup“, within the testimony of Lt. Col Vindman, the witness readily admits to understanding the officially established policy of the President of The United States (an agreement between President Trump and President Zelenskyy), and stunningly admits that two weeks later he was giving countermanding instructions to his Ukrainian counterpart to ignore President Trump’s policies.

The coup against President Donald Trump went from soft, to hard. Consider…

The testimony from Lt. Col. Vindman is available here. [ SCRIBD pdf below]

Borrowing from Roscoe B Davis, here are some highlights:

This next section is very interesting, and very important.

Two weeks after President Trump has established an agreement with Ukraine President Zelenskyy, and established the policy direction therein, Lt. Col. Vindman is now giving contrary instructions to the Ukranian government. Vindman’s lawyer recognizes where the questioning is going and goes absolutely bananas:

View this document on Scribd

A reminder from the CIA “whistleblower” attorney. January 30th, 2017, ten days after President Trump’s inauguration: the “coup has started”…