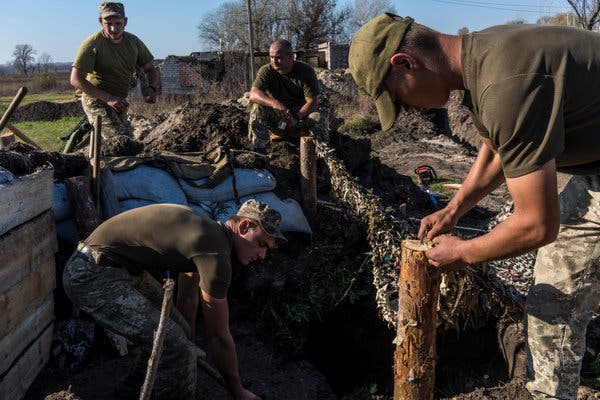 As President Trump froze military aid to Ukraine and urged it to investigate his rivals, the country was struggling in a bare-bones fight against Russian-backed separatists.

For the few remaining Trump-haters who haven’t abandoned us yet, this story too will likely fall upon deaf ears. But facts are facts. Trump has ended the Korean Cold War; ended the Syrian proxy war; and, for all intents and purposes, also ended the Ukraine vs East Ukraine War which had the potential to inflame all of Europe in a NATO vs Russia conflict. Exactly as he did to the CIA/Mossad proxies “rebels” in Syria (here), he brought about peace by cutting off funding and military supplies to the CIA/Mossad proxies terrorist proxies of Ukraine. See the pattern summarized by the two headlines posted below:

“Ukraine, politically disorganized and militarily weak, has relied heavily on the United States in its struggle with Russian-backed separatists. But the White House abruptly suspended nearly $400 million in military aid to Ukraine in July and only restored it last month after a bipartisan uproar in Congress.

Ukrainian soldiers here at the front line were jolted by the suspension, too. While the aid was restored in time to prevent any military setbacks, it took a heavy psychological toll, they said, striking at their confidence that their backers in Washington stood solidly behind their fight to keep Russia at bay.”

Some of “youse guys” can keep saying that Trump is a Rothschild stooge and a Globalist psyop if you insist, but facts are facts –Trump, in fulfillment of his 2016 campaign promises; and in the face of “bipartisan” ™ Congressional opposition, prevented a world war which the demon George Soros (cough cough) openly threatened ( here); and a President Killary would surely have kicked-off. The fact that Trump won’t be able to magically heal and restore a badly diseased, degenerative and decayed White western civilization — which is already too far gone — is neither his fault. nor under his control. Just be thankful that millions of innocent people alive today, on multiple continents (including Americans), would have been dead, crippled or homeless had that deranged Marxist hag been elected in 2016.

1. Killary Clinton openly screamed for “no fly zones” in Syria and also for supplying Ukraine with more arms as well as tactical support from U.S. “advisers.” //

2. The new American boss brought the new boss of Ukraine (Zelensky) to heel, and soon, start a dialogue with Putin. — Trump on Zelensky: “I think he’s going to make a deal with President Putin, and he will be invited to the White House.” //

3. Were it not for the fact that the Nobel Peace Prize is a Globalist scam, Trump should have three of them by now (one each for Syria 2017,

With the warmongering Globalists now in desperate attack / “impeachment” ™ mode against Trump, now would be a good “teachable moment” ™ for a crash-course review of the engineered events which drove the two brotherly Eastern European nations of same blood, same history, same culture and similar language to become enemies — mainly due to the “annexation” of Crimea — and nearly drove the U.S. into war in Europe.

The following, point-by-point contextual analysis will serve to unravel a seemingly complex knot of information. This information is critical to understanding what was recently a potential World War 3 hot-spot — which is why these facts have been downplayed, totally buried, or unnecessarily complicated by the seditious scum at Sulzberger Slimes.

12 EASY STEPS TO TRUTH
1. 1600’s – 1900’s: Dating back to the earliest days of the Russian Empire, through the seven decades of the Soviet Union, the region known as Ukraine, along with Belarus, has always been a brotherly part of the Russian-Soviet state. Ethic /tribal ties among the three go back as many as 1,000 years.
2. 1954: As part of a symbolic gesture marking the 300th anniversary of Ukraine becoming a part of the Tsardom of Russia, an administrative action transferred the government of the Crimean Peninsula from the Russian Soviet Socialist Republic to the Ukrainian Soviet Socialist Republic..
3. 1991: Under Globalist pressure from without and the treason of Mikhail Gorbachev from within, the Soviet Union dissolved into 15 republics. Suddenly, the Russian-speaking people on the Crimean Peninsula were no longer affiliated with Russia. Crimea, given no say in the matter, thus became an unwilling region of the new nation of Ukraine. The Russians did however maintain a vital naval base on the peninsula — one which NATO was already coveting.

4. 1991-2009: The post-Soviet period was marked by constant back-and-forth power struggles within Ukraine between its CIA-Globalist “color revolution” puppet faction and its Russia-friendly faction. On election days, the Russian-speaking Crimean people always voted against the Globalist puppets in overwhelming numbers
5. 2010:Viktor Yanukovich is elected the 4th President of Ukraine. He tries to establish good ties with both Russia and the West. The Globalists believe that they can court Yanukovich and eventually lure him into the European Union / NATO web.
6. 2013: The Yanukovich government stuns the Globalists by ending the process of integration into the European Union and embracing Putin’s multi-lateral worldview instead.

8. December, 2013: Soros agent Senator John McStain(with the full blessing of Obongo) arrives in Ukraine to fire up the ugly rent-a-mob. He pledges American support for their cause.

9. February, 2014: The mob turns violent. Yanukovich — the duly-elected president — is forced to flee for his life to Russia.

10. February, 2014: The hand-picked stooges of U.S. Under-Secretary of State Vicky Nuland (Nudelman) -Kagan(cough cough) are installed. NATO is on a path toward establishing first strike missile capability right on the border of Russia.

11. February, 2014: Spooked by the criminal events and bloodshed in Kiev, the predominantly Russian people of Crimea take to the streets to protest for a clean break from Ukraine and a return to Russian sovereignty. When Crimean self-defense forces deploy in support of the people against Soros-CIA agitators based in Ukraine, the Fake News shrieks about a “Russian invasion” of “little green men.”

12.March, 2014: Crimea holds a referendum with international observers present. By a vote of 97% to 3%, they choose to separate from the gangster government of Kiev and return to Russian sovereignty. Russia accepts their Crimean brothers and vows to protect them. And the Fake News and all the political whores of the New World Order haven’t stopped bitching and whining and sanctioning and threatening Russia over Putin’s “annexation” of Crimea ever since.

There — see how bloody darn simple it can be to understand the truth about the world when the main data points are presented in basic sequential format? Lies complicate. Truth simplifies. Oh if only TomatoBubble.com / ANYT were better-funded! What a much larger audience we could build (hint hint).

Boobus Americanus 1: I read in the New York Times today that Trump abandoned our brave Ukrainian allies in their fight against Putin.

Boobus Americanus 2: I saw on televison that he also abandoned our brave Kurdish allies in Syria. Horrible… just horrible.

St. Sugar: Boobuss, you frickin’ dim-witted dolt! The only people that Trump hass abandoned are the Deep Sstate warmongerss who engineered thesse endlesss warss.
Editor: The Boobus Brothers still don’t understand that “our allies” is Globo code-language for terrorist puppets and proxies.