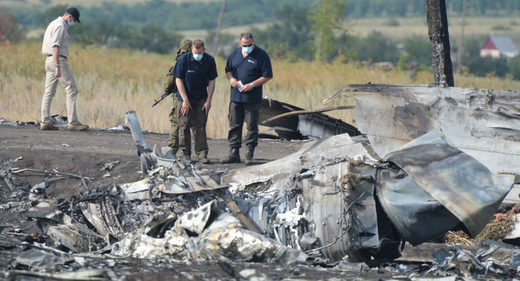 The Malaysian Airlines Boeing 777 crashed on 17 July 2014 in eastern Ukraine while en route to Kuala Lumpur from Amsterdam. All 298 people aboard, mostly Dutch citizens were killed. Kiev and the self-proclaimed republics in Ukraine’s easternmost Donbass region, where the plane crashed, have blamed each other for the incident.

Speaking at a press conference following talks with his Malaysian counterpart, Lavrov noted that US satellite imagery and Ukrainian radar data were still absent in the investigation into the deadly incident.

The Russian diplomat said that Moscow had invited experts from Malaysia to study Russian data on the tragic crash. He added that he had discussed with his Malaysian counterpart Saifuddin Abdullah the ways Russia could contribute to the investigation.

“As far as I understand, Malaysia was not informed about the data we handed to the Joint Investigation Team, so we invited our Malaysian friends to send their experts so that our experts would share with them everything that was shown and sent to the Netherlands to the Joint Investigation Team. I hope it will help our Malaysian colleagues to be more informed than other participants of the investigative team would want them to be”, Lavrov said at a joint press conference with his Malaysian counterpart.

Malaysia to Publish All Crash-Related Evidence

Meanwhile, the Malaysian foreign minister has said that Kuala Lumpur is determined to make public all the evidence pertaining to the 2014 crash.

“Malaysia remains steadfast in our position that we would like to see all evidence made public and that every interested party who has any evidence to offer should be given the opportunity to have the evidence tabled for the investigation”, Abdullah said after talks with Russian Foreign Minister Sergei Lavrov, pledging not to to make any decision “as who is right and who is wrong” prior to studying all the evidence.

Malaysian Airlines Flight MH17, bound for Kuala Lumpur, was downed over eastern Ukraine on 17 July 2014 as the region was embroiled in conflict, following the coup d’etat in the country earlier that year. All 298 passengers aboard, mostly Dutch nationals, died in the crash. Almost immediately after the crash, before any formal investigation, the US and many of its European allies rushed to place responsibility for the tragedy on Russia.

Following the incident, a Dutch-led investigative team put together, to probe the tragedy, claimed that the plane was shot down by a Buk missile system which was transported from Russia and returned after the disaster. Russia was not allowed to participate in the probe.

Russia subsequently conducted its own investigation into the disaster. The manufacturer of the BUK system, Russia’s Almaz Antey company, dismissed the allegations, insisting that the rocket was fired from an area controlled by the Ukrainian military, providing evidence that the system belonged to the Ukrainian Army.

The Russian Defense Ministry claimed that in 2011, Russian authorities had disposed of all missiles from the series in question, including the missile whose engine the JIT demonstrated as evidence to prove Russia’s involvement in the downing of the plane.

The Russian side has repeatedly attempted to provide Dutch investigators with its evidence, but the JIT has shown no interest in any Russian information.