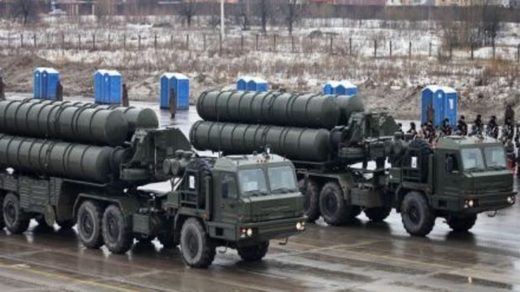 Russia says the S-400 is a cutting-edge air defence system that can detect and shoot down targets including ballistic missiles, enemy jets and drones up to 600 km away.

India has reportedly paid the first instalment of $850 million to Russia as part of the S-400 deal. The payment was made via special arrangements in order to avert the US sanctions. The S-400 Triumph Deal was inked between India and Russia in October last year. The mega defence deal worth $5.4 billion will give five S-400 missile systems to India. According to a report by The Hindustan Times, the first instalment was paid by India in September. The hush-hush way in which the payment was made was to avoid the US sanction under the Countering America’s Adversaries Through Sanctions Act.

This the second time that a report has spoken about the payment. Earlier, Russian Deputy Prime Minister Yuri Borisov was quoted by state-owned broadcaster Rossiya-1 saying that, “The advance payment has been received and everything will be delivered in strict accordance with the schedule, within about 18-19 months.”

Despite pressure from Washington, New Delhi and Moscow went ahead and signed the pact. At the time of the deal, Prime Minister Narendra Modi had said that India and Russia were able to remain great friends over decades, adding, the relationship between the two countries was an important factor for global peace and prosperity. India wants the long-range missile systems to tighten its air defence mechanism, particularly along the 3488 km-long Sino-India border. S-400 is known as Russia’s most advanced long-range surface-to-air missile defence system.

Russia says the S-400 is a cutting-edge air defence system that can detect and shoot down targets including ballistic missiles, enemy jets and drones up to 600 kilometre away at an altitude between 10 metres and 27 kilometres. The system can simultaneously shell 36 targets moving at a speed of up to 4,800 metres per second with 72 ground-to-air missiles.

In September, PM Modi had said that India will walk shoulder-to-shoulder with Russia deepening the bond between the two countries. Giving the formula of 1+1=11, PM Modi said that the coming together will give a boost to development in both countries Addressing the plenary session of the 5th Eastern Economic Forum, PM Modi said the friendship between India and Russia was not restricted to governmental interactions in capital cities, but was about people and close business relations.