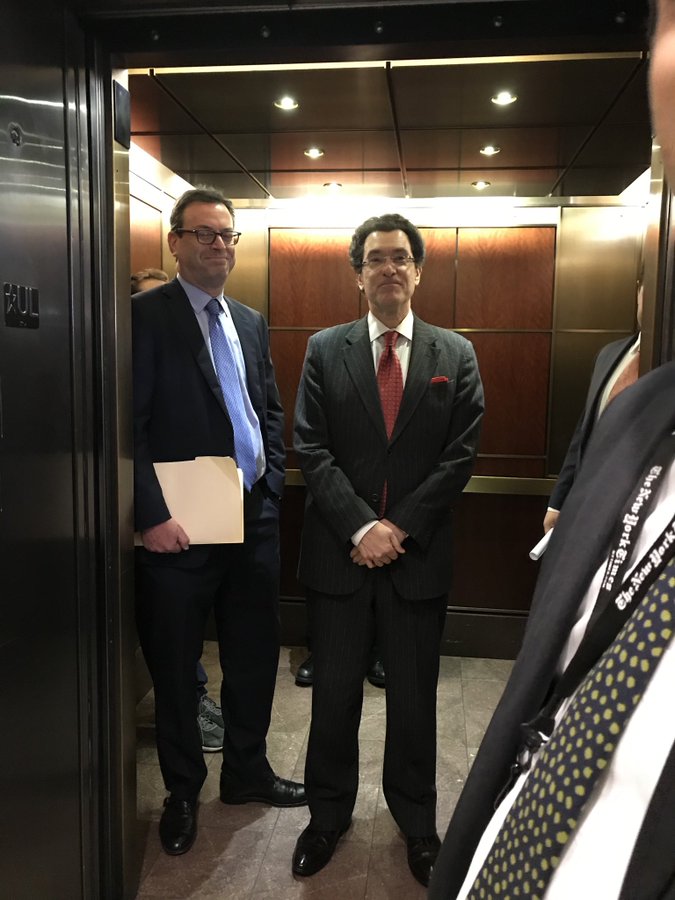 After Goldman, Eisen, Berke and Letter were hired in late 2018, Pelosi then went aboutchanging the Rules of the House in January ’19. Few were paying attention until recently.

In the last month many people have surmised that Pelosi and Schiff moved to utilize the Ukraine/NSC impeachment angle *after* the Mueller angle for impeachment ran into trouble. However, CTH research (widely criticized in 2018) doesn’t reflect the Whistle-blower impeachment plan as an ‘add-on’. Instead, what we see is the use of the HPSCI; and the use of embeds within National Security Council staff; by design. The Schiff events of today were always part of a prior planned design.

Only two committees hired Lawfare staff in 2018: Judiciary (Eisen & Berke) and HPSCI(Goldman). This evidences a 2018 plan to use the Judiciary and HPSCI for the impeachment process as designed by the Lawfare contractors. This design is also outlined in the year of public advice from the mother-ship, Lawfare.

That sets the context for the slick moves by Pelosi and Schiff’s Lawfare team. The contracted legal staff within House Intelligence Committee produced a House “Impeachment Inquiry” resolution to be voted on tomorrow.

By all appearances the impeachment crew is following a legal strategy. Leading with Nadler (Mueller) in the HJC was part of that forethought. Berke and Eisen would then go after the Mueller evidence (grand jury, 6e material). Whether Judge Beryl Howell was/is in-on-it; and whether the DOJ staff tanked the oral arguments on purpose; is up for debate… but the plan was always thus.

Once, Barry Berke and Norm Eisen gained Judicial impeachment validation from a federal judge, that’s where Chairman Schiff and Daniel Goldman come in. Goldman is the Lawfare contractor leading the questioning and framing the House impeachment inquiry approach through the use of the HPSCI rules that are useful in their secrecy.

The primary point is: none of this process-flow is accidental. There is a design evident in activity that is only visible in hindsight.

Why does this matter?

Because if we can see the visible House plan; and if we accept the deliberate process it has taken to carry it out; then why would we assume there isn’t a similar plan for the Senate?

♦ Constitutional professor Lawrence Tribe is to the left as Mark Levin is to the right.

To the Lawfare crew, Lawrence Tribe is their Svengali. Tribe has been hinting toward a process that could be possible within the Senate. [SEE HERE] Ignore him at our peril.

Retreating to the Senate as the Alamo, where all hope falls upon the action of Mitch McConnell, isn’t exactly the most reassuring plan. That approach means the House will have then destroyed the structural intention of the constitutional intent surrounding the impeachment process.

This needs to be fought hard, to stop the House from codifying a process that will forever change the office of the president. The precedent being outlined here is alarming.

The crafted resolution that will be voted upon tomorrow (full pdf below) contains the rules constructed by Nadler and Shiff’s Lawfare staff, for public HPSCI hearings.

The House impeachment resolution blocks President Trump’s lawyers from participating in the House process until the hand-off to the Judiciary Committee for article assembly.

Within the House resolution is a process to transfer the evidence from the three investigative committee chairs: Schiff, Engel and Maloney, to Jerry Nadler at Judiciary. [The process within Judicary will be assembling the ‘articles of impeachment’.]

What Pelosi/Schiff et al have assembled is a format for a highly controlled public spectacle prior to a predetermined transfer of evidence to Jerry Nadler (Judicary). With the intent to construct a pantomime for public absorption in mind, the rules are written for maximum narrative construction. [ex. Lawfare lawyers will question witnesses]

[**Note: IMHO this report has already been written. That was the purpose for the basement hearings. All of this public testimony is for public consumption to support the premise of a constitutional impeachment proceedings. It’s a farce.]

Within the rules, the existence of judicial enforcement authority -punishment for refusing to provide documents and witnesses by subpoena- is assumed. Based on the construction of this resolution, and with Judge Howell’s court decision still standing, this presumption by the House appears structurally solid.

Here’s the full pdf of the rules:

View this document on Scribd

“The resolution provides rules for the format of open hearings in the House Intelligence Committee, including staff-led questioning of witnesses, and it authorizes the public release of deposition transcripts.

“The evidence we have already collected paints the picture of a President who abused his power by using multiple levers of government to press a foreign country to interfere in the 2020 election. Following in the footsteps of previous impeachment inquiries, the next phase will move from closed depositions to open hearings where the American people will learn firsthand about the President’s misconduct.”(LINK)