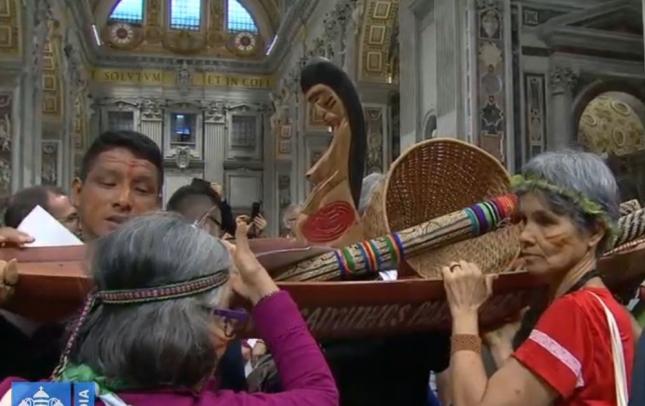 “The priests and scholars “protest against and condemn the sacrilegious and superstitious acts committed by Pope Francis, the Successor of Peter, in connection with the recent Amazon Synod held in Rome,” and they give detailed evidence of the different incidences of pagan worship during the Amazon Synod.

Most prominently, Pope Francis hosted a pagan ceremony with Pachamama statues in the Vatican Gardens on Oct. 4 and even blessed one of the statues. Additionally,he prayed in front of the Pachamama statue at St. Peter’s Cathedral on October 7 and then accompanied it in procession into the synod hall.” lifesitenews

Pope Francis appears to be intent on re-defining the Catholic body of teaching as understood and developed for two millennia.

He agrees with the Sheikh of the Al-Azhar mosque/university that God welcomes a diversity or religions. This is a direct contradiction of Catholic belief in the singular nature of Christianity in God’s “eyes.”

He told an Italian communist atheist author friend that he does not believe that Jesus Rose as an actual man and in his own body which later ascended into heaven. He said that “a spirit” resembling Jesus rose from the tomb on Easter. The belief in the Resurrection is the central tenet of the Catholic Faith. I wonder what he thinks happened to the body since the Gospel is quite clear that the tomb was empty at Easter.

And now he has sponsored the worship of an animist cult within the precincts of St. Peter’s Basilica and the Vatican Gardens and blessed one of their idols.

IMO, unless he is willing try to pronounce ex-cathedra as to the orthodoxy of his faith, he has a limited future as pope. pl