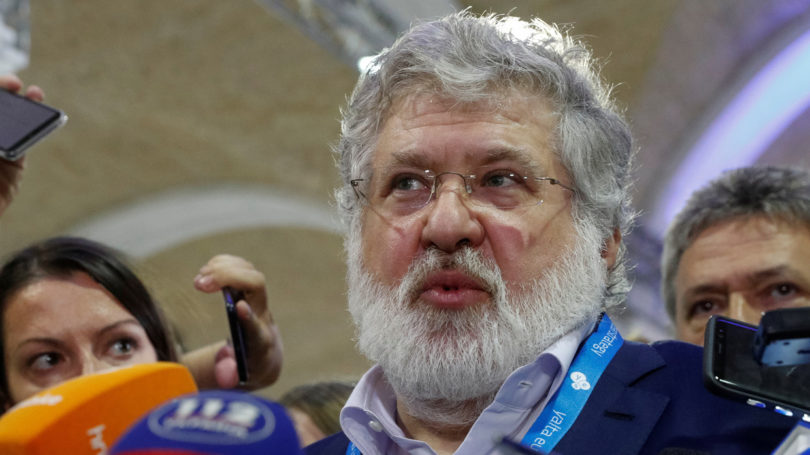 A tycoon who spent millions of dollars arming anti-Russian fighters in Ukraine has emerged from the shadows to blast the Europe he once idolized. The oligarch now sees alliance with Russia as the only option for his country.

Igor Kolomoysky, the oligarch seen by many as the shadow power behind Ukrainian President Volodymyr Zelensky, has changed his tune sharply from the days of the 2014 Maidan rebellion.

Back then he was an ally of pro-European President Petro Poroshenko, who even appointed him governor of the Dnepropetrovsk region. Once installed there, Kolomoysky placed a bounty on captured fighters from the self-proclaimed Donetsk and Lugansk republics, who fought against the new authorities in Kiev, and spent a reported $10 million per month fielding his own private militia, also funding ultranationalist volunteer units, like the neo-Nazi Azov Battalion.

“We’ll just have to kill them,” he said of the rebels at the time.

He now believes an alliance with Russia is the best bet for Kiev, he told the New York Times in an interview.

“They’re stronger anyway. We have to improve our relations,” he said. “People want peace, a good life, they don’t want to be at war. And you [America] are forcing us to be at war, and not even giving us the money for it,” he added, referring to reports that the International Monetary Fund is holding up an aid package to Ukraine until the government pursues money missing from Kolomoysky’s Privatbank – money Kolomoyasky is accused of embezzling.

“You all won’t take us,” the oligarch said of the EU and NATO. “There’s no use in wasting time on empty talk. Whereas Russia would love to bring us into a new Warsaw Pact.”

The IMF, he said, could easily be replaced by loans from Russia. “We’ll take $100 billion from the Russians. I think they’d love to give it to us today,” Kolomoisky said. “What’s the fastest way to resolve issues and restore the relationship? Only money.”

Progress towards EU and NATO membership, coveted by the government in Kiev, has been slow at best. Despite the signing of the Ukraine–European Union Association Agreement in 2017 (which the electorate rejected in the Netherlands), European Commission President Jean-Claude Juncker said at the time that it would take at least 20 years for Ukraine to become a full-fledged member state.

Kolomoysky’s referencing of the Cold War military alliance is likely to raise eyebrows in Washington, especially given his closeness to Ukraine’s new president Volodymyr Zelensky. Kolomoysky used to be Zelensky’s employer back when the president was a comedian, and is reported to have bankrolled his election campaign. In addition, Western leaders have expressed concern that the billionaire could play puppet-master to Zelensky, prompting the new leader to publicly declare that his wealthy backer would hold no sway over his administration.

Though Zelensky has maintained dialogue with European leaders on resolving the war in Ukraine, he has also held phone talks with Russian President Vladimir Putin on mending ties and simmering down the conflict.

US President Donald Trump has expressed hope that Zelensky and Putin can “get together and solve” their problems. However, for most lawmakers in Washington the prospect of a Moscow-Kiev pact is a no-go.

Kolomoysky is undaunted by the prospects of a Democrat taking office next year and cracking down.

“If they get smart with us, we’ll go to Russia,” he told the Times. “Russian tanks will be stationed near Krakow and Warsaw. Your NATO will be soiling its pants and buying Pampers.”

Though described by Putin as a “swindler” and “one of a kind chancer,” Kolomoysky is certain that Kiev will drift towards Russia.

“I’m describing, objectively, what I’m seeing and where things are heading,” he said