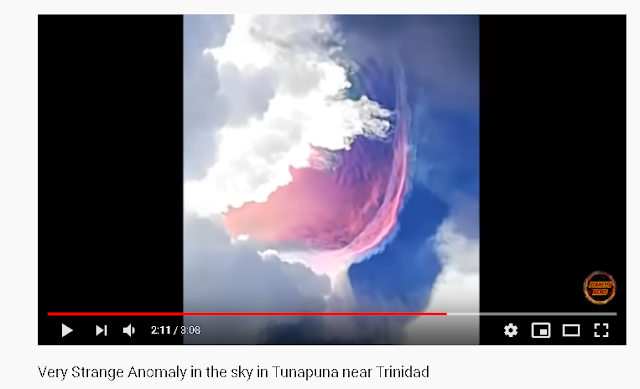 This post is only for those who are looking for the Signs.

Since the last time I posted about the Signs more of them appeared, all pointing at the same direction.

I will post here a few sings, noticed by other people and explained by my old pal, Cat Motya.

He is grieving that the darkness has to retreat, to withdraw, to flee, to descent back to its underworld and to take them all with it, because of Him.

A “Very Strange Anomaly” was recorded in the sky in Tunapuna near Trinidad.

People immediately screamed that it was the Horseman of the Apocalypses, not understanding that the Revelation was about the things that past, battles that took place. The Red Dragon trying to eat a baby Christ? No one is expecting the Preexistent to come back as a baby, so things seen by Saint John are the things of the past.

Anyway, this is not what everyone fears.

I am posting here a few images to explain it all.

So, in my previous posts on the signs we watched the I, Pet Goat IIcartoon that shows how the Savior-like figure comes into the world to one deserving man.

I live, you also will live

you are in Me, and I am in you

I will love him and reveal Myself to him

Wittingly or unwittingly, the authors of the cartoon, or those who ordered it, revealed the path that the Preexistent is coming to one man on earth. Either this, or the Divine Particles played a trick and used this cartoon to show us where to look for the Signs that the Second person of the Trinity is progressing toward this one deserving man.

Together, for the past couple of years, we traced the path in the cartoon images and found them in reality from the beginning through all its scenes, including Notre-Dame de Paris fire.

I skipped some signs, due to too much unrelated work, but I wrote somewhere that this deserving man is thinking for our entire world, and only for him the Preexistent lifts up the world from the Abyss it has been steadily falling in. It encompasses multiple changes to the world, nature and men. It specifically addresses the Matrix in which most are trapped. The Matrix is being disassembled right now, and the screams of horror about the ‘end of the world’ are coming from the Matrix creatures feeling that something profound is happening to them, but cannot explain what and why. Ignore their screams, for people everything is getting better. Just seat back comfortably and watch how the Matrix and many of its creatures disappear as if they never existed. As if they never existed.

You Know Them By Their Deeds

Not everything that the Matrix does is evil, some of it is neutral and some even appears to be good. It aims to separate people from the Divine, by replacing the Divine in some cases, while denying an existence of the Divine, in others. The Matrix uses the GIFT given to people by the Preexistent. From the very beginning it did everything to make the Children of God to forget about the Gift, to forget that co-creation is a blessing and labor is a curse.

How would we know that it’s not the Apocalypses that everyone fears, but the Preexistent is lifting the world higher and closer to the Divine Kingdom? Because, peace is being restored everywhere miraculously, feuding nations become friendly, the black spot of death spreading over entire world, as I described in my book Hell and Israel stopped growing and shrunk, documented not just by geo-political observers, but by physicists.

In the sky in Tunapuna near Trinidad seen the reflection of the Orion constellation into our World.

From the Orion appeared a Boat that delivered Someone to His destination.

And… a shape of the heart for those especially dense.

And… finally… Trinidad means the Trinity in Spanish, referring to the Holy Trinity. tri-unity, triune

Tunapuna in Swahili means “we” or “we find.”

There is nothing out there more important that this.

Prince Arthur returned, and we were presented with a sign of his return.

A 700-year-old sword stuck in solid rock found under water.

Archaeologists report they have pulled a Medieval sword embedded in rock at the bottom of Vrbas river in Bosnia.

A medieval hand-and-a-half-long sword rammed into stone, discovered this summer at the bottom of the river Vrbas in Bosnia, has been hailed by experts as a significant archaeological find.

As the sword was literally plunged into stone, it has been necessary to slowly separate the stone from the sword under water, as the sword had to be recovered together with a part of the rock.

The sword found in stone in a river in Bosnia has inevitably drawn comparisons with the famous Excalibur, the sword in the legend of King Arthur, which only a true king was able to extract from the lake in which it lay.”

Camelot is not in Britain, it’s located in a different parallel dimensions. Merlin, the King of Dragons, is and always has been the only Magician that ever existed. They both fought against the Red Dragon and his people, and lost. The Matrix, a reflection of the Red Dragon into our world, has been building itself, parasitizing on all of us.

The Preexistent is destroying the Matrix, and Prince Artur and Merlin returned.

We move in spaces, dimensions and time – all at once – and therefore IF a year ago you couldn’t imagine something, but right now you see it and it looks obvious and simple.

You might tell yourself, “I was a fool not seeing this ten years ago.” But, it didn’t exist ten years ago that’s why you didn’t see it. It might look as if it was there ten years ago, but it just has appeared before you. It wasn’t there and therefore don’t be surprised that it’s here now. Furthermore, some things might appear for you now as if they have always existed. But, it wasn’t there. That’s why we can create now something new, but it will look like it existed forever for those who are sleeping. You look at this and see something, while the others won’t see anything ever.

Hubble’s Portrait of a planetary nebula NGC 2022 located in the constellation of Orion (the Hunter).

Here on the screenshot from the I, Pet Goat II, we have pyramids and a fireball, and a sun, and a Scorpio representing  Harpokrates a Greek for the Egyptian god Harpa-Khruti  or Horus the Child. He also symbolizes the resurrection from the dead.

and fireballs seen in other places

WHY?Archaeologists uncovered 30 ancient wooden coffins in Egypt’s Asasif necropolis, where the ancient city of Thebes once stood. They opened the sarcophagi on Saturday to reveal perfectly preserved mummies inside. The coffins are about 3,000 years old and were probably for priests and children.Oct 19, 2019

the Asasif is a necropolis of the fertility goddess Hathor. Hathor holds the key of eternity – Ankh.

the first such diamond in the history of global diamond mining

you are in Me, and I am in you

Those who don’t have bodies are much stronger than those who have bodies.

It’s something that those who seek to kill us can never understand.

Our dead fight along us with The Archangel Michael’s Army

Instead of the Red Dragon Matrix, we’re getting the Catrix. hehehe

Because the Cat was the one who came from Egypt through Alexander Pushkin’s Christian masonic fairy tale about a magical talking cat into this reflection of the universe to claw us all from of the Abyss. No one else bothered. So, it’s the King and the Cat!