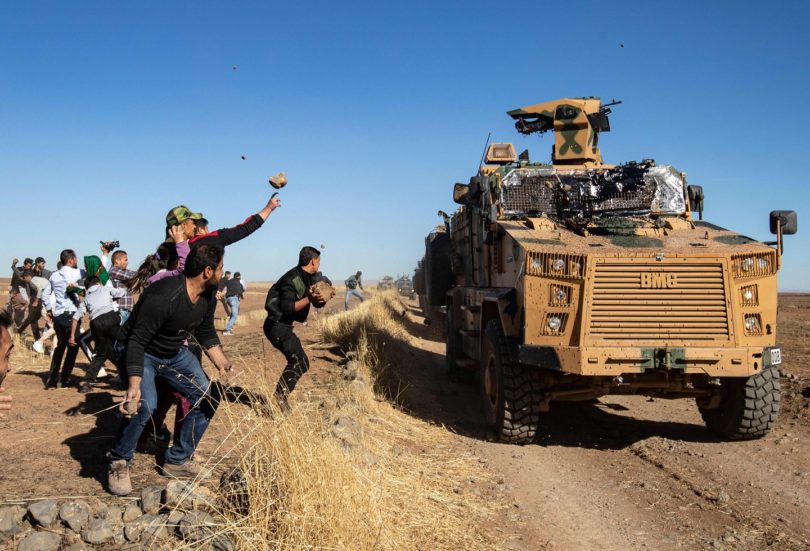 Kurdish provocateurs have tried to burn a Typhoon MRAP vehicle of the Russian Military Police and a Kirpi MRAP vehicle of the Turkish Army in northern Syria. The incident happened during a joint Russian-Turkish patrol, which was conducted in the framework of the safe zone agreement reached between Ankara and Moscow.

Russian and Turkish forces once again showed an amazing restraint and avoided the use of force against the Kurdish radicals. Nonetheless, a Turkish vehicle rammed one of the cars involved in the provocations.

Such actions of Kurdish radicals affiliated with the Syrian Democratic Forces pose a serious threat to the shaky stability in the region. If their actions lead to casualties among Russian or Turkish personnel, they will easily find themselves in the situation when the Turkish Army will have to resume its military operation in the area and Moscow will not hurry up to rescue them once again.

The intensity and frequency of attacks on the Russian-Turkish patrols by pro-SDF rioters that are always timely supported by journalists are a strong signal that these developments are a part of well-organized pre-planned campaign to instigate tensions in the area.

Local experts say that by such actions the US-affiliated part of the Kurdish leadership is attempting to undermine the de-escalation and demonstrate to the so-called international community that the US troop withdrawal led to the destabilization of northern Syria.

At the same time, the SDF leadership announced that it rejects the deployment of the Syrian Army and the Russian Military Police in the town of Tell Tamir. Earlier reports appeared that the Russian Military Police will establish an observation point there. The Russian military convoy even deployed near the town. This move is aimed to de-escalating the situation north of the town, where clashes between Turkish-led forces and SDF units in some cases backed by the Syrian Army.

However, it seems that the SDF leaders have once again demonstrated that they are more interested in keeping their fleeting influence than in stability in the area.