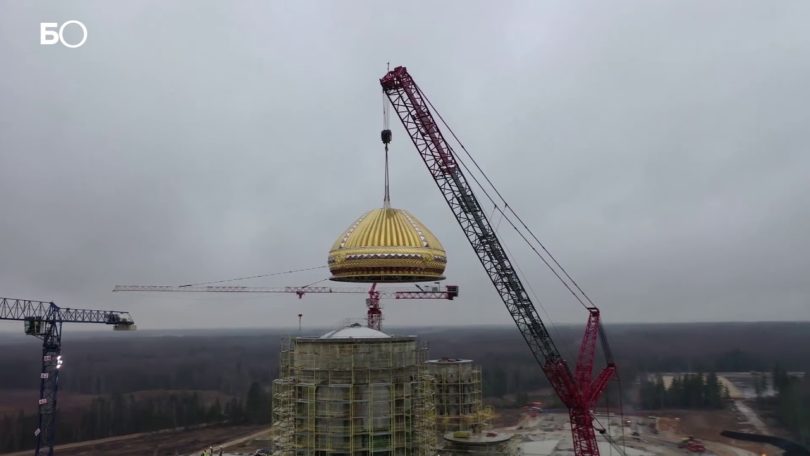 A grandiose cathedral on the outskirts of Moscow, which is set to become the main Orthodox Christian church for the Russian military, reached a milestone on Friday when builders put in place the first of its six domes.

The dome, which weighs 34 tons and measures 12 meters across, was lifted by a high-endurance crane to the height of a 20-story building and lowered onto one of the Resurrection Cathedral’s four smaller towers in Kubinka. An even bigger dome will later be placed on the central tower, raising a cross to a height of 95 meters. The sixth dome will crown the bell tower.

Befitting a military church, the domes are shaped to resemble medieval helmets. They are made of stainless steel and covered with a film of titanium nitride rather than traditional gold.

The cathedral is being erected near Moscow at the Patriot Park, the Defense Ministry’s main exhibition venue. It is meant to commemorate all those who lost their lives on the battlefield defending Russia throughout its history, as well as to honor those in the military service. The four main sections of the church that are topped by the smaller domes are dedicated to the patron saints of the four arms of the Russian armed forces.

Largely funded by private donations that are set to exceed 3 billion rubles ($47 million), the decoration of the cathedral is in keeping with its military connections. Its stained glass windows feature military awards, while it walls are adorned with reliefs showing Russian troops throughout the country’s history.