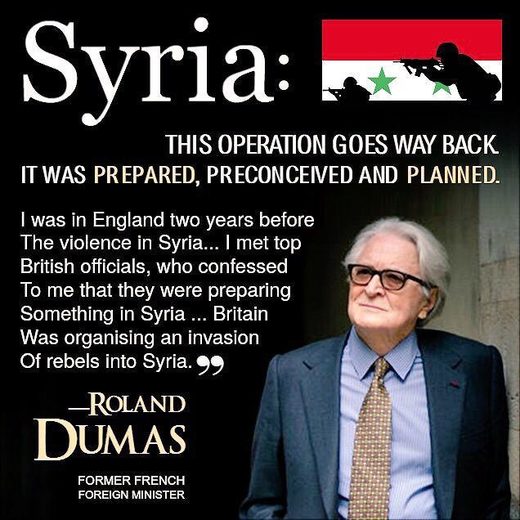 France’s Former Foreign Minister, Roland Dumas, has stated in a televised program on LCP that UK government officials not only told him about preparations for war in Syria two years prior to the start of the fake revolution there in 2011, and the subsequent ‘civil war’ conducted by Western intelligence agencies that has killed up to 300,000 civilians to date, they also tried to enlist him to support their evil cause.

The reason Dumas gives for this war is that Syria is perceived by Israel to be a regional competitor and thus became a target for Western-backed ‘régime change’, however that is not what motivates the US and UK elites to remove Assad – they want him out in order to break the alliance of Hezbollah (Lebanon) – Syria – Iran (and now Russia).

Anyway, here is Dumas speaking on French TV in late 2012:

From Wiki:On 29 May 2011, along with attorney Jacques Vergès, Dumas announced plans to sue French President Nicholas Sarkozy for crimes against humanity in relation to the NATO bombing campaign against the Gaddafi government as part of the 2011 Libyan civil war. A Gaddafi government spokesman made a concurrent announcement, seeming to endorse the legal action. In a program which aired on Libya’s Al-Jamahiriya TV on May 29, 2011 (as translated by MEMRI), Dumas sharply criticzed Sarkozy, stating that “

the only thing I know [about French Leaders] is that they have gone crazy. President Sarkozy hosted Qadhafi a few months ago at the Élysée Palace, with a red carpet and all the grandiose honors. Two months later, Sarkozy is leading a crusader war, at the head of NATO, which has become a pawn serving international politics. This has been going on for a long time.” He further stated that

“I regret to see my country, to which I belong with spirit, blood, and life, leading an instrument such as NATO to come and destroy an entire people and attack its leaders.”