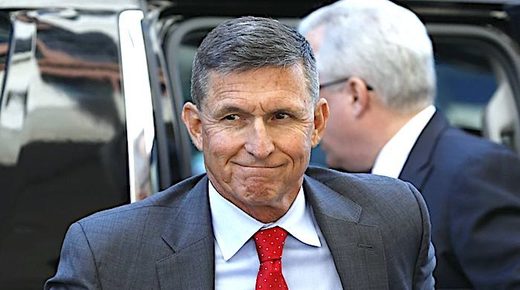 We reported in June on a story that was first brought to our attention by Neonrevolt. In November 2017, General Michael Flynn wrote an op-ed for the Hill. In the piece Flynn wrote:”The primary bone of contention between the U.S. and Turkey is Fethullah Gülen, a shady Islamic mullah residing in Pennsylvania

“Gülen portrays himself as a moderate, but he is in fact a radical Islamist. He has publicly boasted about his “soldiers” waiting for his orders to do whatever he directs them to do.

If he were in reality a moderate, he would not be in exile, nor would he excite the animus of Recep Tayyip Erdoğan and his government.”Flynn then compared Gulen to leaders of the Muslim Brotherhood and “Turkey’s Osama Bin Laden”. He discussed how Gulen brought into the US numerous individuals to run his charter schools he set up:”To add insult to injury,

These schools have been granted more H1-B visas than Google. It is inconceivable that our visa officers have approved thousands of visas for English teachers whose English is incomprehensible. A CBS “60 Minutes” program documented a conversation with one such imported English teacher from Turkey.

Several lawsuits, including some in Ohio and Texas, point to irregularities in the operation of these schools.”

Flynn then dropped this bomb about the Clinton Foundation’s relationship with this terrorist:“However, funding seems to be no problem for Gülen’s network. Hired attorneys work to keep the lucrative government source of income for Gülen and his network going. Influential charities such as Cosmos Foundation

Incidentally, Cosmos Foundation is a major donor to Clinton Foundation. No wonder

Bill Clinton calls Mullah Gülen “his friend.” It is now no secret that

Huma Abedin, Hillary Clinton’s close aide and confidante, worked for 12 years as the associate editor for a journal published by the London-based Institute of Minority Muslim Affairs. This institute has promoted the thoughts of radical Muslim thinkers such as Qutb, al Bana and others.”Neonrevolt noted a New York Times article that discusses the terrorist organization in the US led by Gulen. What is happening is this:”The taxpayers fund the school system. The school abuses the H1-B visa program to import “teachers.” The “teachers” get paid by taxpayers. The “teachers” then donate 40% of their paychecks BACK to the Gulen Movement.

And Gulen goes and donates a chunk of this change back to the Clinton Foundation… while also trying to subvert and overthrow the Turkish government.”Neonrevolt then noted some statistics on the corruption in the US related to the Gulen group.

“Gulenists’ contributions to congressional campaigns have been known for some time, as

Sheila Jackson-Lee, and Henry Cuellar, both Democrats, are among the biggest benefactors of Gulen contributions.

House ethics committee has investigated more than 200 trips taken by members of Congress since 2008 that were secretly funded by Gulen groups.” …

“Clinton has been the biggest recipient of Gulenist donations of any presidential candidate this cycle, federal election records show.”This all leads up to today –

General Flynn as we all know now was targeted by Obama and the Deep State. He knew too much and he was working with Trump, but maybe his oped was what scared them the most. He had to be taken down and so he was targeted shortly after the 2016 election and before the 2017 Inauguration.

He lost his job with the Trump team due to shady actions by the Deep State and then was targeted by the Mueller team. He is still waiting on his sentencing although most who follow his case now believe his case will be dismissed due to Deep State wrongdoing.

Erdogan stated yesterday that he flew to the US and hand delivered documents to President Trump regarding terrorist Gulen, whom General Flynn reported was protected by Obama and who donated to the Clintons.

Wow – it sounds like Erdogan wants Gulen in Turkey to be held accountable for the deaths of 251 people there, no doubt related to the coup Gulen was involved in.

Let’s hope the terrorist Gulen and his gang in Pennsylvania are quickly shipped to Turkey by Thanksgiving Day!