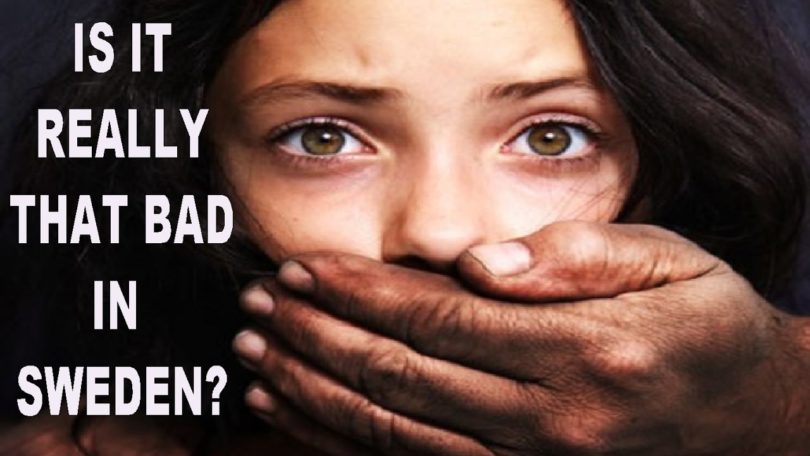 In Sweden the rape of white Swedish women by black immigrant-invaders never stops. In the latest outrage four black Eritreans forced a 13 year old Swedish girl into a bathroom and took turns raping her while filming the gang rape. According to the news report, the vaginal rape was “preceded by violence consisting of at least two of the defendants grabbing the plaintiff’s neck and shoulder, slamming her head into a wall and pushing her into a bathroom.” https://europe.infowars.com/four-migrants-charged-in-brutal-gang-rape-of-13-year-old-swedish-girl/

If convicted, prosecutors hope that the four blacks are deported back to Eritrea and are banned from entering Sweden for at least 15 years. But the Swedish Migration Tribunal blocks deportations on “humanitarian grounds.” https://www.rt.com/news/472639-sweden-muslim-extremists-expel-humanitarian/

Deportation means no prison time for gang raping and recording the rape which under Swedish law is a clear felony as a “child pornography offense.” Prison time would be too much to impose on the poor underprivileged misunderstood black men from Eritrea who came to Sweden searching for a new life. Oh, the poor dears. I can hear the feminist Swedish government crying over the poor dears and blaming the Swedish girl for the rape.

Notice also that the news report describes the gang rapists as “defendants” and not as perpetrators, and that the raped victim is merely a plaintiff, not a victim. This is the way it is in Sweden. The migrant-invader-rapists-bomb-throwers https://www.rt.com/news/472924-sweden-criminals-using-bombs/ are protected by hate speech laws. A raped Swedish woman runs a risk of being accused of a hate crime by immigrant-invader advocates if she reports her rape.

Police officials who have stated that the vast majority of rapes are committed by the immigrant-invaders have been suspended and investigated. https://sputniknews.com/europe/20180215/1061687084.html

Why do white women continue to live in Sweden, a country where the feminist government dangles them as bait to attract more immigrant-invaders? Polls show that 25% of Swedish women are afraid to leave their house even to go shopping. The 1,472% increase in violent rape has left Swedish women prisoners in their own homes.

Does the 13 year old girl have a father, brothers, cousins? If so, how can the prosecutors expect the blacks to live long enough to be deported to Eritrea? As the traitorous feminist all female government of Sweden has opened Sweden’s borders and invited in rapists of Swedish women, there is no government protection of Swedish women. Punishment of rapists has collapsed. The Norwegian-based Herland Report reports that “in an astounding number of cases, the Swedish courts have demonstrated sympathy for the rapists, and have acquitted suspects who have claimed that the girl wanted to have sex with six, seven or eight men.” https://www.hannenabintuherland.com/europa/a-turn-for-the-worse-for-the-rape-capital-of-the-west-feminist-sweden/

With the collapse of law and punishment, rapists can only be held accountable by the families of those whom they violate. But what has become of Swedish men? Have they been so alienated by feminists that they leave Swedish women to their own recourse? What a total disaster for women Swedish feminism has turned out to be. In Sweden the feminist government has brought endless rape without recourse.

Why did the Swedish government decide to destroy the peaceful homogeneity of Sweden? Did George Soros pay them to destroy Sweden by bringing in immigrant-invaders to rape the domestic female population? In an effort to make Swedes more acceptable of immigrant-invader-rapists, the Swedish government TV channel produced a fake news “documentary” that the first Swedes were blue-eyed black Africans who eventually turned white so that they could get vitamin D from the scant Swedish sun. https://www.rt.com/news/451766-swedes-outraged-ancestors-documentary/

Wherever we look in Europe the same question stares us in the face. The Merkel bitch has destroyed Germany. https://russia-insider.com/en/funny-german-actress-absolutely-destroys-traitoress-merkel-open-letter-you-belong-prison/ri27718 The German Federal Institute for Employment Research estimates that immigrant-invaders could constitute more than 40 percent of the population of Germany in 20 years. In larger cities the migrant-invader population is expected to comprise 70 percent of the population. https://www.eutimes.net/2019/11/germany-will-soon-have-35-immigrants-while-cities-will-have-70-majority/
In other words, Merkel has left no room for Germans in German cities.

European alt-media news reports say that Italy gives more aid to immigrant-invaders than it does to the Italian handicapped. We see this everywhere. Europe exists for the immigrant-invaders, not for the native born citizens. The leader of France’s nationalist party, Marine le Pen, is threatened with criminal prosecution for hate speech for defending the rights of Frenchmen.

Nowhere in Europe can a citizen protest the destruction of his country without being called a “white supremacist” and subject to indictment for hate speech. Nationalism and patriotism have become crimes.

To be clear, Europe no longer exists. Europe is a Tower of Babel, an utterly destroyed civilization. There is no Europe left.

It is the same in the United States. Obama, the great savior, dumped 100,000 Somalis on Minneapolis and another 100,000 on Portland, Maine, and little doubt elsewhere.

What does a community do when it has 100,000 aliens dumped in its midst demanding food, housing, health care, and entertainment? Being dark-skinned the unwanted immigrants have privileges under the civil rights laws that discriminate against white men.

How does it help Washington to have Europe under the control of Islamicists that Washington has been bombing and invading for two decades?

How does it help the Israelis to have the Islamist Middle East spread into Europe?

How does it help Israel to have vast numbers of Islamicists in the US to object to Israel’s control over the US government and Israel’s territorial gains in the Middle East?

Clearly, the morons who rule in Washington and Israel have created a world that is multiplying the numbers and power of the enemies of Israel and Washington.

Little wonder Russia and China stand aside ignoring provocations and waiting for the certain self-destruction of the utterly dumbshit Western World.