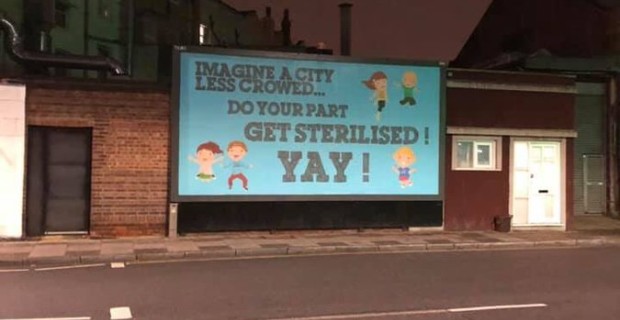 A billboard has appeared in London encouraging white people to sterilize themselves to solve overpopulation.

The sign, which was put up on Holloway Road, says “Imagine a city less crowded… do your part–get sterilised! Yay!”

The advertisement betrays a noticeable lack of ‘diversity’ as it only features caricatures of white people and no people of color.

Another Twitter user responded to the image by noting that a similar billboard had been erected in his home country of Portugal.


Back in 2017, Londoners were hit with a different message after someone painted “SEX WITH REFUGEES IS JASMINE-SCENTED AND BEAUTIFUL” on the side of a building.


Promotion of sterilization appears to be having an impact in some western countries where native birth rates are already dropping.

The number of Swedish men seeking voluntary vasectomies has risen by 70 per cent – from from 1,430 men in 2013 to 2,470 in 2017. In cities like Stockholm, the number of men sterilizing themselves has doubled over the last five years.

This has contributed to Swedes having a 1.78 birth rate, well below the replacement rate of 2.2 children per woman. This compares to just over 2 children for women from migrant backgrounds.